The Taoiseach has said he hopes Ireland's unemployment rate will fall below 10% by the time the general election takes place in 2016.

Enda Kenny said while he could not predict the future there were real job opportunities in the agri-sector.

Unemployment is at its lowest level since 2009, according to the latest figures from the CSO's Quarterly National Household Survey.

The rate has fallen for six consecutive quarters from a high of 15.1% at the height of the financial crisis. A poll of economists last month forecast it would take until the end of 2014 for the rate to drop that low.

The number of people in employment was at its lowest in the first half of 2012, and started to grow in the last quarter of that year.

The number of unemployed fell by 12.8% in the year to the third quarter, bringing the total number of people on the dole to 282,900.

Both the Taoiseach and the Tánaiste welcomed the CSO figures. 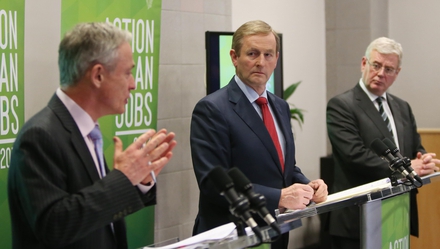 Taoiseach Enda Kenny said that 90% of measures in the Action Plan for Jobs had been delivered over the past seven quarters.

He said those measures that have not been delivered remain a priority.

Tánaiste Eamon Gilmore said the figures reflected the biggest increase in employment since the recession began.

He said he was particularly encouraged that there were so many full-time jobs in the figures, but acknowledged the Government has a distance to go.

Today's figures also show that the long-term unemployment rate fell from 8.9% to 7.6% over the year and accounted for 58.4% of total employment in the third quarter compared to 59.5% a year earlier.

Minister for Jobs, Enterprise and Innovation Richard Bruton said the fall in unemployment figures is testament to the capacity of Irish business.

Speaking on RTÉ’s News At One, Mr Bruton said the drop gives his department momentum in creating the Action Plan for Jobs 2014.

"It’s a testament to the capacity and resilience of Irish business, of Irish workers, and particularly new start-ups.”

Mr Bruton said the latest figures show improvement across a broad range of areas but he is particularly encouraged by increases in the number of people securing jobs in the construction sector.

He said they are a tribute to the business community, which is creating jobs.

But Mr Calleary said Fianna Fáil is concerned about the figures for unemployment for under 25s.

He said that the youth guarantee needs to be properly funded and properly resourced and needs to create real jobs.

Sinn Féin Senator David Cullinane, the party's spokesperson on jobs, said that any increase in employment has to be welcomed.

However, he said there are still far too many people emigrating.

He said 1,700 mainly young people leave the State every week.

He said too few jobs are being created and there are far too many people unemployed.

Commenting on today's figures, business group Ibec said they provide the strongest evidence yet that real confidence has returned to the Irish economy.

In a statement, Ibec said that the very positive third quarter employment trends are in line with the recent strong rebound in business confidence and hiring intentions remain solid for 2014.

"It is also very positive to see that there is a good sectoral spread in the jobs recovery.

"Agriculture, manufacturing, tourism and professional services/technology have been the strongest performers, but it also really encouraging to see the recovery in construction employment," said Ibec's chief economist Fergal O'Brien.

"While emigration has played a role in keeping the jobless rate down, it is now clear that there is more to the fall in unemployment over the past year or so than just that. Employment opportunities are on the rise, which can only augur well for the economy as a whole in the months ahead," the economist added.

He said he expects the improving labour market to be reflected in higher house prices, stronger retail sales and lower mortgage arrears over time.