Distribution and support services group DCC has reported pre-tax profits of €163m for the year to the end of March, up 24.7% on the previous year.

Operating profits for the year, on a constant currency basis, rose by 21.3% to €229.2m while revenues increased by 19.4% to €13 billion on the back of acquisitions.

The results were better than the company had expected.

Its healthcare division was also boosted by acquisitions.

The company has proposed an 11.4% increase in the final dividend to give a full year dividend of 85.68 cent, up 10% on the previous year and the 19th year in a row of dividend growth.

Earlier this month, the company cancelled its listing on the Dublin Stock Exchange, while it maintained its premium listing on the official list of the UK Listing Authority. It is anticipated that its shares will be included in the FTSE All-share index and the FTSE 250 index from June 24.

As a result, DCC said it will present is results in sterling from now on. About 80% of its operating profit in the year was denominated in sterling.

DCC, whose activities range from oil distribution to waste management and food distribution, said it expects operating profit to rise by 10-12% in its new financial year, but added that the cost of new debt facilities would hold back growth in earnings per share.

''The outlook for the year to March 2014 is set against a continuing weak economic environment in its principal markets and the important assumption that there will be normal winter weather conditions,'' commented DCC's chief executive Tommy Breen.

''DCC remains a strong equity base, long term debt maturities and significant cash and committed bank resources which leave it well placed to continue the development of its business in existing and new geographies,'' he added. 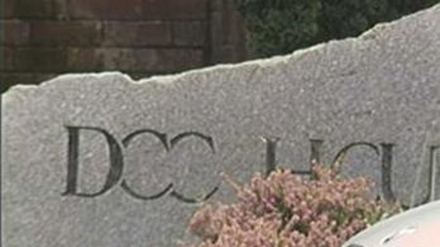 Revenues at DCC's energy division rose by 21% to €9.948 billion while operating profits soared by 48% to €130.2m as the business benefited from organic profit growth, driven mainly by a return to colder winter weather conditions and from good development activity.

The division sold 9.6 billion litres of product during the year, up 21.8% on the last year. DCC said that the oil business in Ireland and the UK rebounded strongly from the ''very difficult'' previous year, as it was boosted by the colder weather and strong growth in transport fuels.

DCC SerCom division saw revenues rose by 17.9% to €2.269 billion while operating profits grew by 1.3% to €50.9m. Growth in mobile devices in the UK and in its supply chain management more than offset the effect of the decline in the market for home entertainment products in Ireland and the UK.

Its healthcare division reported a 13.6% rise in revenues to €393.2m while operating profits grew by 10.3% to €27.2m, boosted by the acquisition of Kent Pharma.

Operating profits at DCC Environmental fell by 11.7% to €13.4m while revenues inched 1.6% higher to €142.4m as it experienced difficult market conditions in both Ireland and the UK. It noted that price competition was intense in the hazardous sector, which saw a fall in demand due to the challenging economic climate.

Operating profits at DCC's Food and Beverage division dropped by 29.6% to €7.5m while revenues fell by 6.1% to €212.9m after the loss of a major contract in the frozen and chilled logistics business in the second half of the year and a reduction in the profitability of the wine business in the UK.