According to the latest figures from the Central Statistics Office, house prices were up by 0.9% across the country in September, with Dublin prices seeing a 2.4% rise in the month.

The increase in Dublin is the largest in almost six years.

While property prices are still down substantially year on year the rise has helped slow the decline.

"Recent house price trends provide comfort to our view that, after four consecutive years of double-digit price declines, the worst is over for the Irish housing market," Philip O'Sullivan, chief economist with NCB said.

"In saying that, the outlook is far from uniform. Our sense is that the Dublin market has bottomed but risks lie to the downside in rural areas, where oversupply is a concern," he added.

Davy economists pointed out that the CSO index only covers half of total transactions and we don't yet know the true movements in market prices.

"Around 40% of activity in the housing market at the moment is being done through cash, which suggests things may be stronger than the CSO numbers indicate," Alan McQuaid of Merrion Economics suggested.

"Anecdotal evidence too would point to signs of pent-up demand for family homes, especially in certain areas of Dublin. Although the latest figures are encouraging, it is too early to say whether house prices are now on a steady upward rise."

Dublin house prices increased by 2.6% in September but were 10.6% lower compared to a year earlier.

Dublin apartment prices were 8.8% lower when compared with the same month of 2011. However, they recorded an increase of 0.2% this month on top of a 1.3% rise in August.

House prices in Dublin are 55% lower than at their highest level in early 2007.

Apartments in Dublin are 63% lower than they were in February 2007.

Residential property prices in Dublin are 56% lower than at their highest level in February 2007.

The fall in the price of residential properties outside the capital is somewhat lower at 46%.

Overall, the national index is 50% lower than its highest level in 2007. 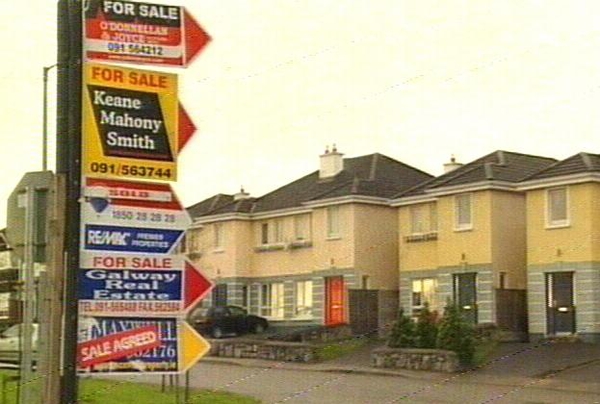 Cash is king in housing market.