HSBC has acknowledged shortcomings in its anti-money laundering operations at a US Senate hearing.

The bank revealed that David Bagley, a top compliance executive at HSBC since 2002, would step down.

Bagley also said that the bank was in the process of closing thousands of accounts in Cayman islands.

The Senate panel released a scathing report calling out a "pervasively polluted" culture at the bank.

The Senate report, which came after a year-long inquiry, said the bank had routinely acted as a financier to clients routing funds from the world's most dangerous locations, including Mexico, Iran and Syria.

While the big British bank's money-laundering problems have been flagged by regulators for nearly a decade, the report and hearing escalate pressure on the bank, as it awaits a massive fine from the Justice Department for lapses in its safeguards.

It also comes as international banks' reputations have taken a fresh blow due to allegations of a manipulation of a key global benchmark rate.

Senator Carl Levin, who chairs the Senate's Permanent Subcommittee on Investigations, began the hearing with an extensive explanation of how HSBC's lapses have been a threat to financial markets around the world.

A Reuters investigation has found persistent lapses in the bank's anti-money laundering compliance since 2010, despite its assertions that it has cleaned up its act.

"Accountability for past conduct is essential. That's what's been missing here," Levin said, adding that the bank's charter could be at risk if it did not do better.

The hearing started with officials from the US Treasury and Department of Homeland Security, but the fireworks began when HSBC executives came to testify.

Bagley, HSBC's head of group compliance since 2002, told the hearing he had been hamstrung by the bank's structure, and that while changes had been made it was time for him to go.

"I recommended to the group that now is the appropriate time for me and for the bank, for someone new to serve as the head of group compliance. I have agreed to work with the bank's senior management towards an orderly transition," he said.

The harshest spotlight will be on Stuart Levey, who joined the bank in January as chief legal officer. He had been the Treasury Department's top official on terrorism finance from 2004 to 2011, during which time he was involved in cracking down on HSBC for Iran-related transgressions.

In prepared testimony released at the start of the hearing, Levey placed much of the blame on HSBC's rapid expansion, which left in place a decentralized management structure that did not implement consistent standards across the bank and viewed compliance only as an advisory job.

HSBC shares fell 1.9% in late London trade. Analysts warned that the bank faced huge financial penalties - but perhaps worse, found itself in the crosshairs during an election year.

"(The) most important consequence is that the bank is now under the microscope ... at a very bad time where banks are used as scapegoats by politicians globally," analysts at Italian bank Mediobanca said in a research note, adding that they expect HSBC to face a $1 billion fine as well.

In a statement to British regulators early yesterday, the bank began its mea culpa.

"We will acknowledge that, in the past, we have sometimes failed to meet the standards that regulators and customers expect," it said. "We will apologise, acknowledge these mistakes, answer for our actions and give our absolute commitment to fixing what went wrong."

The Senate report released on Monday detailed how between 2007 and 2008, HSBC's Mexican operations moved $7 billion into the bank's US operations. According to the report, both Mexican and US authorities warned HSBC that the amount of money could only have reached such a level if it was tied to illegal narcotics proceeds.

It also examined banking HSBC did in Saudi Arabia with Al Rajhi Bank, which the report said has links to financing terrorism.

HSBC will have company in the Senate's harsh spotlight - the report was also highly critical of the Office of the Comptroller of the Currency, a major US bank regulator.

In prepared testimony, the OCC acknowledged the need for changes in its oversight of anti-money laundering operations, as called for in the Senate report.

The OCC will also testify on the extent of the failings it found in HSBC's money laundering controls, and the orders it issued to the bank to correct them.

The exhibits for the hearing also provide new clues about how the Justice Department and regulators developed their probes of HSBC and Mexican drug trafficking.

A July 2009 email from an OCC official to the bank relates a call received from the US Attorney's office in Brooklyn.

The OCC official said that an assistant US attorney "said that his office is in the early stages of investigating possible money laundering through the repatriation of US currency through accounts at the banknotes division of HSBC-NY."

The author of the email, Daniel Stipano, is an OCC lawyer scheduled to testify on Tuesday.

Later that day, Stipano told his peers at the OCC: "From what I can tell, this has the makings of potentially being a major criminal case, we need to be all over it."

According to the Senate report, the OCC did not take strong action against the bank until the fall of 2010, after the agency had learned of US law enforcement probes. 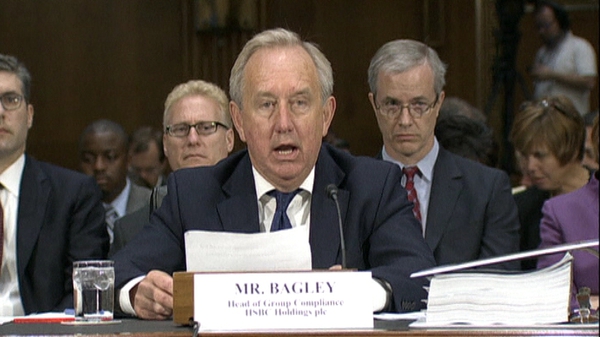