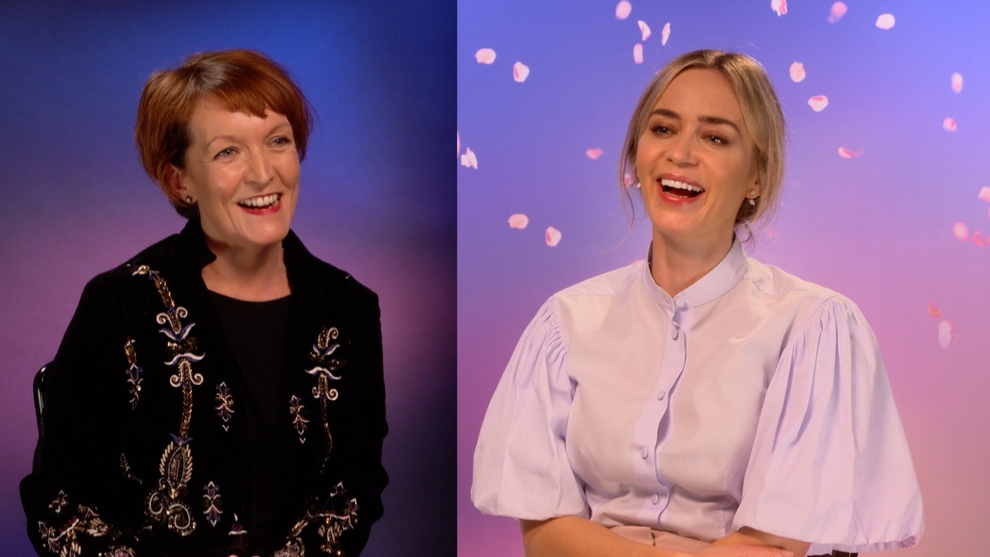 Click here to return to the Movies and Musicals page

Aedín chats to George Fenton, who has composed scores for The Wind that Shakes The Barley, Dangerous Liaisons and You've Got Mail, working with directors including Richard Attenborough and Terry Gilliam. He talks about a new album of his scores arranged and performed by pianist Simon Chamberlain.

Aedín talks to legendary star of stage and screen, Elaine Stritch about her life, career and one-woman show, 'Elaine at Liberty'.

Twenty Years of Movies and Musicals

In the week that RTÉ lyric fm celebrates its 20th birthday, Aedín Gormley, who has been there from day one, looks back at twenty years of her much loved show, Movies and Musicals. With interview highlights with composers from John Barry to Alan Menken to Michael Giacchino and stars of stage and screen, Julie Andrews, Angela Lansbury, Mark Hamill, Elaine Stritch, Mickey Rooney, Emily Blunt, Lin- Maunuel Miranda and Colin Firth as well as orchestral live concert recordings with composer Marvin Hamlisch and conductor David Arnold. Not to be missed!

Aedín talks to Killarney actor Jessie Buckley, who shines in the role of Rose-Lynn Harlan, a brazen young ne’er-do-well from Glasgow who is fixated on going to Nashville to become a country singer in the acclaimed new film Wild Rose.

Aedín hosted a Q and A with a difference at The Light House Cinema in Dublin with the great cinema composer David Shire, who has worked with Barbra Streisand, Francis Ford Coppola and David Fincher, and performed live with vocalist Suzanne Savage and saxophonist Catherine Sikora.

In advance of his role as William Shakespeare in All is True, Aedín meets director and actor Kenneth Branagh to discuss his role as the Bard, Patrick Doyle's atmospheric soundtrack and finally working with Ian McKellen.

In a Movies and Musicals special, Aedin Gormley talks to the team behind the Stan & Ollie biopic - stars Steve Coogan and John C, Reilly, plus director Jon S. Baird. They chat about bringing the iconic comedians back to the big screen, how visiting Cóbh brought the real Oliver Hardy to tears, and Alan Partridge as Sweeney Todd!

Aedin Gormley met with Emily Blunt to ask about playing this iconic role while simultaneously filming The Girl on the Train, and hearing Mary Poppins sing for the first time in 54 years.

Aedín talks to Lin-Manuel Miranda, star and creator of Hamilton, about his role in Mary Poppins Returns:

Aedín talks to director Rob Marshall about his vision for Mary Poppins Returns, bringing this iconic character back to the big screen. and working with Irish actors Jim Norton and Chris O'Dowd on the movie.

Aedín also met with the composer and lyricist behind the songs and score - Marc Shaiman (composer and co-lyricist) and Scott Whitman (co-lyricist). They talk about writing for Emily Blunt, Lin-Manuel Miranda and Ben Whishaw, and we get a sneak preview of songs that didn't make the cut!

In a radio exclusive, Mark Hamill discusses his life and career in an interview recorded for the 'Creative Minds' series at the American Ambassador's residence, as part of the St. Patrick's Festival. Mark Hamill is best known for playing the role of Luke Skywalker in the Star Wars saga, most recently in Star Wars: The Last Jedi. He discusses his extensive career including the role of Luke Skywalker, working closely with Carrie Fisher and Harrison Ford and learning a cúpla focal.

Listen back to the interview HERE

In this special interview, Aedín talks to director Lee Unkrich and producer Darla K. Anderson about the latest Pixar film set in Mexico, Coco. Despite his family's baffling generations-old ban on music, young Miguel dreams of becoming a musician and sets off on an extraordinary journey to unlock the real story behind his family history.

Ahead of his 50th birthday, composer Michael Giacchino talks to Aedín Gormley. One of the most successful and popular composers over the last twenty years, he has worked closely with director JJ Abrams on Star Trek, Lost and Super 8 and recent scores include Up, Inside Out, Rogue One, War For The Planet Of The Apes and Spider-Man: Homecoming.

Aedín Gormley talks to Lin-Manuel Miranda, the American actor, composer, rapper, and writer, best known for creating and starring in the Broadway musicals Hamilton. He had just co-written the songs for the new Disney feature ‘Moana’.

Listen back to the interview HERE 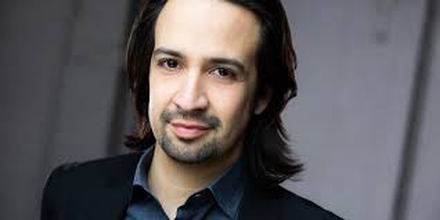 Aedín conducted a public interview with Dame Julie Andrews at the Bord Gais Energy Theatre as part of the 2015 Jameson Dublin International Film Festival, and celebrated the legendary star on the occassion of her 80th birthday with another chance to hear an earlier interview, recorded on the occasion of the publication of Dame Julie's book ‘Home, a memoir of my early years.’ (Photo credit: Frances Marshall)

Listen back to the programme here 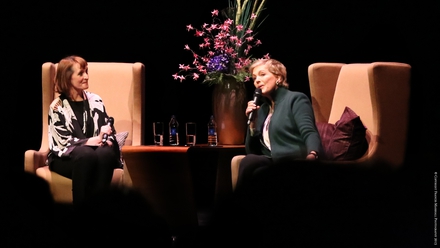 Listen again to Aedín's public interview with Angela Lansbury recorded at The Bord Gais Energy Theatre, as part of the 2016 Audi Dublin International Film Festival. Best known for her TV role as Jessica Fletcher in the longest running detective series in TV history, Murder She Wrote, Lansbury's career has spanned almost seventy-five years. In that time the 90-year-old star has appeared in over 60 films, including early roles in ‘Gaslight’ and The Picture of Dorian Gray’ as well as her critically acclaimed performance in The Manchurian Candidate. Moving into musical theatre, Lansbury gained stardom for playing the leading role in the Broadway musical Mame (1966), which earned her a range of awards and also originated the role of Mrs Lovett in Stephen Sondheim’s musical Sweeney Todd. As well as receiving an Honorary Oscar, Lansbury has also garnered five Tony Awards, six Golden Globes and an Olivier Award.

Alan Menken and Bill Condon talk Beauty and the Beast

Who doesn’t love a bit of Disney in their lives? Especially when there’s a magical feeling in the air surrounding the remake of Beauty and the Beast. Aedín Gormley talks about her interviews with composer Alan Menken and director Bill Condon ahead of the release.