After a year and a half of forced isolation for most of us, a few days of near-seclusion on an island might not be your go-to choice of staycation. But after two days of wandering free-range through lush lakeside forests and far away from Dublin City, I can think of no better way to blow off the cobwebs.

Set amidst 75 acres of ancient forest and hugging Lough Erne, Lusty Beg Resort in Co Fermanagh is a family owned hotel that feels like the furthest thing from a hotel imaginable, in the best way. I was invited to visit the resort with a plus one – my boyfriend – just as the weather kicked into high, glorious gear.

It's clear from the easygoing atmosphere that the staff prioritises guest comfort and peace over hounding them with helicopter care, and because of this the resort has created an air of accessible wilderness, and a camp-like feel that doesn't sacrifice the glamorous parts of staycationing – a full spa, a pool and a divine restaurant.

The beauty of the resort is, it's still a little hidden. The first self-catering cabins were built in the 1960s, but it wasn't until the Caddens – with Arthur and his wife Liz Cadden at the helm – took over in 1991 that the resort came to life. Despite struggling through the Covid-19 pandemic, and enduring a number of personal tragedies, the resort has surged in popularity in recent months.

Local legend – "local" being one of the staff who showed us around – has it that the island was gifted to the couple as a wedding present by Liz's father, which while partially untrue, sets the standard high for what is a popular venue for weddings.

The week before we visited there were no less than five ceremonies, with three scheduled for the following week. Not at all a funny time to bring a boyfriend along on a press trip...

But once we arrived, it was all tranquility and laid-back ease, with the two-minute ferry ride over – the only way to access the island – instantly making you feel hundreds of miles away. The manicured grounds were buzzing with families trickling out of the wooden cabins, dogs roaming the grounds and kids launching themselves into the still lake. Very Dirty Dancing, in my opinion.

We settled in with afternoon tea in the sun, nibbling on mini macrons, scones and excellent ham and chicken sandwiches, before walking the two minutes to the spa, nestled along a canopy of trees.

Offering everything from manicures and pedicures, to massages and facials, the minute spa overlooks the lake and echoes that sense of calm. We were booked in for the barrel baths, large hot water tubs filled with rose petals and overlooking the serene lake, which cost £55 per person sharing.

With the sounds of lapping water, birds singing and the occasional clink of glasses of complementary prosecco, it was bliss – even if the unexpected hot weather we could only manage 40 mins before overheating. So came our cue to go scope out our cabin.

There are a number of cabins to choose from, from single-room ones to double-storey mini lake houses that can sleep up to six people. The cabins are warmly decorated in a plush contemporary style, and self-catering cabins come with everything you need to cook dinner or make a pot of tea.

We, however, were treated to one of three bridal suites, with a wooden terrace that overlooks the water, framed by towering trees. And contrary to what my boyfriend might have thought, we were not being sold it as a wedding venue – it just really is that romantic on its own.

After a quick costume change into leggings, we set off for a rib boat tour of Lough Erne. With general manager Mark as our tour guide, we headed off into the still waters of the lake, speeding through the glistening water past farmland and dense woods. Although the average depth is roughly 12 metres, the lake's lowest depth measures 65 metres and feels truly enormous once you're on it.

If the first half of our day felt like Dirty Dancing, we quickly made the transition into Assassin's Creed territory, as we made a detour to White Island, to explore the ruins of a 12th century church. The walls and archway of the minute structure still remain, as well as a curious collection of eight stone carvings that are thought to date back to the 9th century.

Once back on dry land, it was back to the spa for a 30-minute Indulgent Back Massage, costing £45, for myself and my boyfriend. There's an art to a calming treatment room and Lusty Beg nailed it, their rooms dark and soothing, while the 30 minute massage felt like 60 thanks to the therapists focused work on my tight shoulder muscles.

Next was dinner at the resort's on-site restaurant, The Lodge. Intimate and rustic, the restaurant overlooks the sun-drenched terrace and leads onto the atmospheric bar, the walls of which are made from reclaimed heavy wooden doors.

Craving carbs after our long drive and adventures on the lake, I chose the cheesy garlic bread for starter and the porcini mushroom ravioli for mains, while my boyfriend got the seafood chowder and the Hereford 28 day Aged Sirloin Steak. The garlic bread was pillowy and oozing with cheese, while the ravioli was rich and soupy.

Finished off with an indulgent chocolate brownie, we were fit only for bed, but one of the beauties of staying on an island resort is that bed is just five minutes' walk from the dinner table, and it was a delight to meander back under the starry sky.

The next morning we passed the misty lake on our way to breakfast, where we chose from a simple but delicious selection of porridge, a full Irish and other classics. I chose the smoked salmon and scrambled eggs, while my boyfriend went for the full Irish, and thanks to the casual atmosphere and gentle bustle of the guests, it felt more like breakfast at a friend's big house than a restaurant.

What's the point of staying in a Dirty Dancing-esque resort if you don't make the most of the scenic location, so before we checked out we set off on the walking trail.

Snaking along the perimeter of the island, it's a breathtaking wander through the trees and brings you right down to the banks of the lake. One hidden spot reveals a semi-built stone structure overlooking the still lake. Make your way down there for sunset and you have yourself a rom-com moment.

The walking trail is just one of the many activities on the island, including archery, clay pigeon shooting and canoeing, but it's especially fun for kids with fairy doors and storybook stops dotted throughout.

The Verdict
Although we were only on the island for exactly 24 hours, we left Lusty Beg with all the peace and relaxation of a week-long holiday in Spain. If you're in the market for a truly unique experience, this resort has so much to offer any kind of traveller.

The Details
We stayed in the Lusty Lodge suite as invited guests for one night, a suite that usually requires a minimum of 4 nights to book and costs £190 per night. We tried the barrel baths, which cost £55 per person sharing, and each had an Indulgent Back Massage, which costs £45 for 30 minutes.

Our breakfast and evening meal were also included. 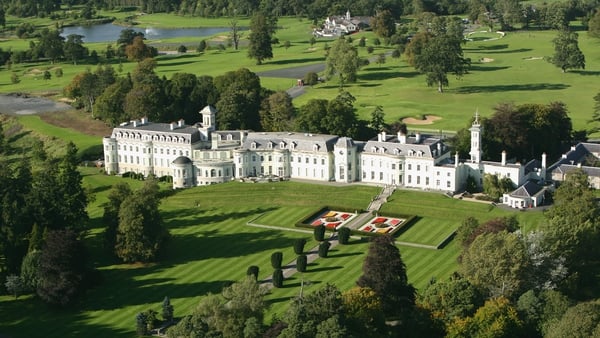 A grand stretch: A sublime spa staycation at the K Club