A large-scale global survey by YouGov, polling nearly 28,000 people from 26 different countries, has found that Britons have the world’s most negative view of their own tourists, and believe that the rest of the world agrees…

Unfortunately, at least some of the world does. When asked to name the three countries with the worst tourists, almost half of Spanish respondents named Great Britain, while Brits also topped the table in Germany. 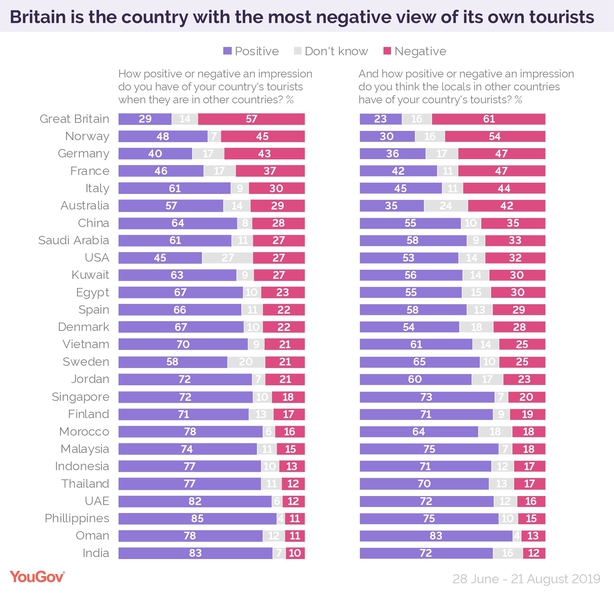 Brits abroad
It seems that quite a lot of people dislike British tourists, including most Britons. A massive 57% of native Brits see British tourists in an unfavourable light, and an even larger percentage (61%), think their fellow countrymen are disliked by locals when abroad.

Though other countries were nicer about their travellers, some reported a large gap between how they viewed their own tourists, and how they thought those tourists would be seen abroad. Italian tourists had a 61% approval rating among their fellow Italians, but only 45% said they’d be liked by locals elsewhere.

Around the world
In Europe, Russian tourists were similarly scorned and topped the distaste tables across the whole of Scandinavia.

In Asia the Chinese are bottom of the pile, putting up big numbers in Malaysia, the Philippines, Thailand and Vietnam. The worst reception came in Singapore, where Chinese tourists were singled out for criticism by a survey-leading 67%.

In the Middle East, Saudi Arabians emerged as most unpopular, and were cited in Morocco, Jordan and Kuwait. Neither China not Saudi Arabia share Britain’s self-awareness on the issue, and 64% and 61% respectively had a positive opinion of their own people on holiday. 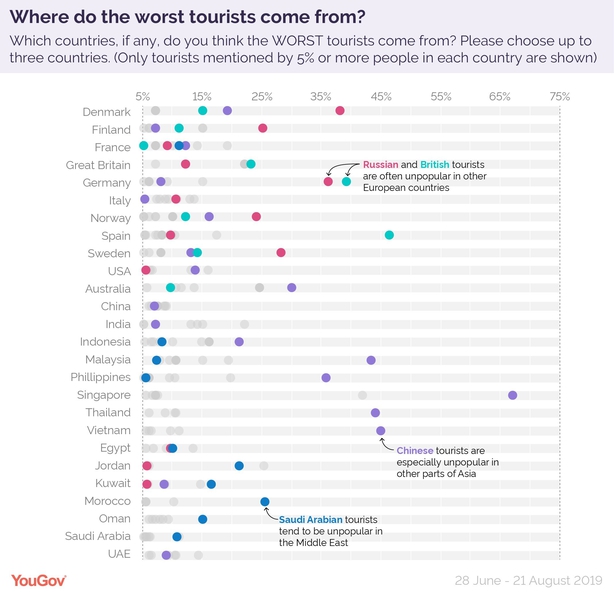 In happier news, Japan stood head and shoulders above the rest as the most welcomed tourist nationality, especially in fellow Asian countries like Singapore, Indonesia and Malaysia. Australians were also popular, with positive responses from India, the Philippines and Vietnam.