There are many ways to experience everything that Ireland’s Hidden Heartlands has to offer, but perhaps the most satisfying is to do so on foot. With each successive step here, the cacophony of car horns and screeching tyres are replaced by the soothing peacefulness of this special region. It is in these quiet, timeless, ageless areas where you would be forgiven for thinking your footprint is the first to have made an impression.

Almost every part of Ireland’s Hidden Heartlands are worth investing your precious walking time in. However, we’ve taken the slog out of the planning stage with a list of six unmissable areas to explore. 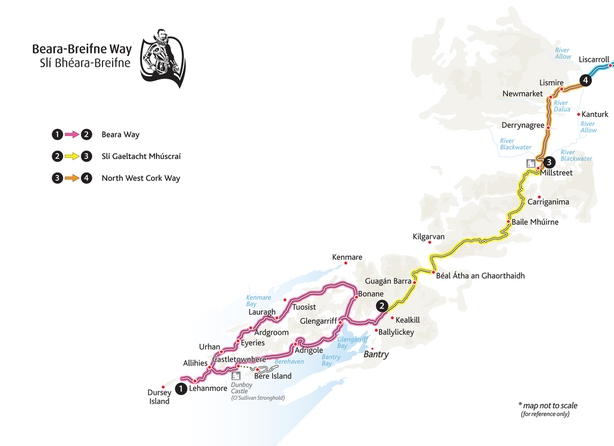 The history of the Beara Breifne Way is both rich and fascinating. The trail follows the 14-day march undertaken by O’Sullivan Beara in 1603 in the aftermath of the Battle of Kinsale, with numerous skirmishes and ambushes understood to have taken place along the way.

One of the jewels in the crown of Ireland’s Hidden Heartlands, the Beara Breifne Way spans the entire heart of the country from rugged Lehanmore in Co Cork to beautiful Blacklion in Co Cavan. The walking trail is constantly being improved and expanded, putting it firmly on course to become a world class Irish attraction.

A number of routes have been specially drawn up to act as hubs for travellers, both from home and abroad, keeping them constantly in close proximity to a wide range of hostelries, bars and attractions. This means visitors are never far from a cultural stop-off, welcoming meal or safe haven to rest their weary heads for the night. 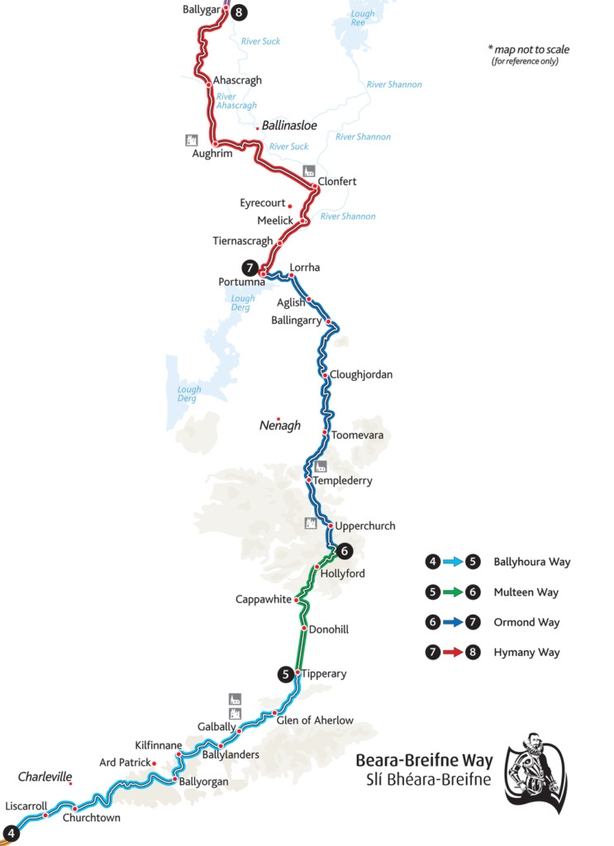 The area, with its incomparable views and scenery, harks back to a bygone era; a snapshot of an Irish landscape preserved in the face of centuries of subsequent modernisation.

Warm welcomes are promised at every step, such as in the lively, mountain-flanked town of Kedue in Co Roscommon, the Irish name of which translates as  "low-lying green hill" or in Aughrim in Co Galway, the site of one of the most significant battles in Irish history, The Battle of Aughrim, and a riveting destination for history aficionados.

Curios are dotted along the way such as in stately Castlerea Co Roscommon, where travellers can marvel at the grave of Cindy the Circus elephant, a local legend and town mascot.

The core ethos of the Beara Breifne Way is collaboration. The 60 community groups that orchestrated the walking trails from Cork, Kerry, Limerick, Tipperary, Offaly, Galway, Roscommon, Sligo, Leitrim and Cavan make it one of the largest community projects ever undertaken in Ireland. 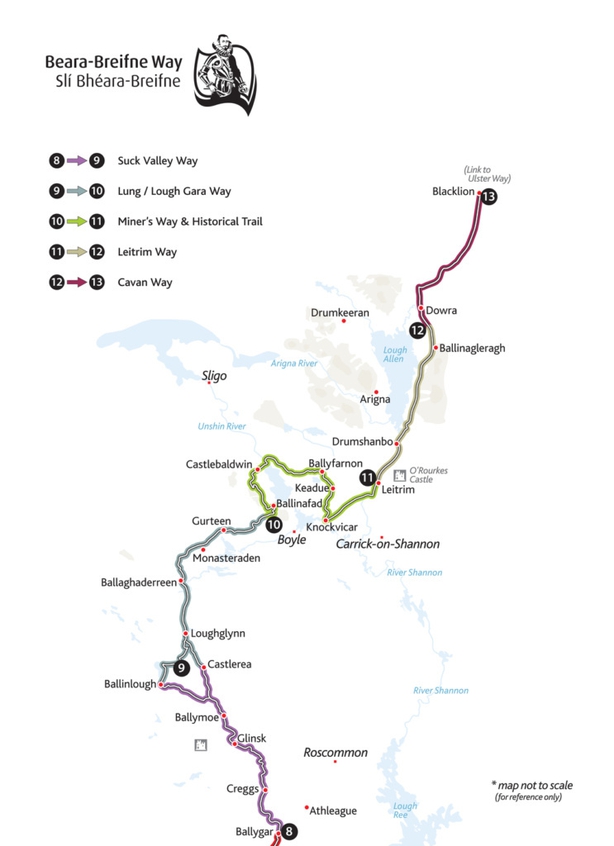 It is designed with a focus on returning travellers, too, with a specially designed Beara Breifne Passport, which can be purchased on the Beara Breifne Way website. This acts as a log for intrepid walkers and explorers. With each stage of the way completed, you’ll receive a stamp in recognition of your hard work. It’s particularly fun for families and groups of friends – get one for each member and compete to see who fills their passport first!

Much like its Beara Breifne cousin, the Lough Derg Way offers an opportunity to witness the unspoiled beauty of Ireland’s Hidden Heartlands along a 64 kilometre trail. It begins at the tourist office in Limerick City (behind the Hunt Museum, for the curious) and stretches along the winding, circuitous routes of the River Shannon taking you all the way to the lake port of Dromineer on Lough Derg.

The route is a walker’s paradise taking you through the rolling hills of Clonlara, the village of O’Briensbridge and the ancient town of Killaloe, once the home of the 11th Century High King of Ireland, Brian Boru. The Lough Derg Way escorts you across the river in this historic hub, where you can rest up with coffee and pizza in the Italian deli, Ponte Vecchio, or discover its heritage at St Flannan’s Cathedral, including its awe-inspiring early Christian oratory.

The southern section of the trail is predominantly made up of quaint canals and riverside passages, offering a glimpse into an often unseen aspect of Ireland’s beloved landscape. Mingle with cattle in meadows and watch fishermen patiently at work on canal banks, while in the northern end - largely comprised of country roads – you can witness the ebb and flow of country life.

The way ends in an ideal setting, the charming port town of Dromineer, and indeed, there are few things more satisfying than a dip in its glistening waters after a satisfying walk. With a plethora of water sports on offer to soothe tired feet, the town also has stunning castle ruins to explore. With the Lough Derg House  and Lake Café right at the harbour’s edge, you can unwind as the sun sets over the water.

Bisecting Galway and Roscommon, The Suck Valley Way – one section of the Beara Breifne Way - is another tranquil, if lengthy, trail which brings walkers along the banks of the River Suck. Much like Miner’s Way, this route is best explored over numerous days (the entire loop clocks in at around 105 kilometres) but you will be welcomed with open arms at numerous places to stay, bars and restaurants along the way.

This route provides an ideal taste of the breathtaking landscape on offer, not just in Ireland’s Hidden Heartlands, but across the length and breadth of the island. You will pass bogs and wetlands, patchworks of curiously shaped fields, farms and a hugely diverse ecosystem along the banks of the river.

The area’s beauty is revealed further in what are known locally as the "nine friendly villages" of Ballygar, Creggs, Glinsk, Ballymoe, Ballintubber, Dunamon, Castlecoote, Athleague and Mount Talbot where the towns live up to their heady moniker. Businesses in the area are well-used to visitors enquiring about the routes, so all queries are expertly answered. Some B&Bs have also been known to pack lunches for their guests to tuck into on their walk.

The scenery along this particular stretch is simply breathtaking. Here the landscape is punctuated by ringforts, castles and impossibly old churches, and the La Tené Stone - a beautifully carved granite boulder dating back to the Iron Age snugly nestled at Castlerange.

While each of the hiking routes scattered throughout Ireland’s Hidden Heartland make accessibility a priority, it is advisable to take note of any requirements that a party may need before embarking on their adventure. Walks across various types of terrain are suitable for even the achiest of knees are available, while the length of practically any hike can be adjusted to suit needs.

As ever, be sure to wear appropriate footwear and bring food, water and a fully charged mobile phone. Each local tourist board will have in-depth information, as well as suggested routes, depending on your requirements.

Leitrim also possesses a medley of unique walking experiences. They range from the 3 kilometre Aghacashel Looped Walk, to the Crummy Loop Walk and usher travellers along the eastern edge of Lough Allen for its duration, so a sight of shimmering blue water is never far away.

Its minor roads and country lanes can be thoroughly explored in a little over an hour, a perfect introduction for the amateur amblers keen to break in their shiny new hiking boots. Along the way, travellers encounter everything from a famine graveyard, to an ancient sweathouse built of moss-dusted stones.

If you prefer something a little more on the challenging side, the delightfully-named Crummy Loop Walk also begins at Aghacashel. A 12 kilometre hike may sound daunting for some but it is definitely worth the effort for the raw, natural beauty of the surrounding landscape revealed with each passing step.

The Drumhauver Bridge Loop, tracked at around 10 kilometres, is ideal for the less-experienced hiker who has a moderate level of fitness, with plenty of places to stop along the way (Leitrim village and Drumshanbo for example, once a centre for poitín production) to assuage a well-earned thirst or fill a hungry belly.

The Drumleague Lock Loop, which takes you towards Battlebridge Lock and extends to the now famous Acres Lake Floating Boardwalk, is a perfect route for a family of hikers or cyclists.

5) The Miner’s Way and Historical Trail

One of the principal jewels in the crown is the Miner’s Way and Historical Trail, a winding 118 kilometre route which touches on Lough Allen, Lough Arrow and Lough Key. The Arigna Mines in Ireland’s north midlands were the lifeblood of the region for over four hundred years, its deposits of coal and iron sustaining not only the town but other cities: the iron mined from here was used in the Ha’penny Bridge in Dublin, a piece of trivia that locals are happy to impart.

The nearby Arigna village was at the centre of it all but now with the mines almost entirely depleted, a new industry has grown out of the remains of another. The various walking tours, both guided or otherwise, tell their own unique story of this particular slice of Irish history.

The walk itself is highly customisable, with any number of combinations of routes, making this an incredibly accessible trail. The Arigna Mining Experience will tell you all you could possibly want to know about the Irish mining industry and its indelible links with families in the region.

The nearby Cistercian Boyle Abbey dates back to the 12th Century, a relative newcomer to the locale when compared to the fourteen passage graves at Carrowkeel Neolithic cemetery, which are estimated to be more than 5,000 years old.

This 26 kilometre walking route emerges from the western part of the county – the Cavan Way is a quiet one in the final stage in the Beara Breifne Way. This trail almost exclusively consists of rural country roads paths in the shadow of the Shannon, allowing travellers to reflect on how far they’ve come and ponder how many more routes they might wish to walk.

The gentle trail begins in Dowra and ascends into the heavenly limestone landscapes of the Cuilcagh Mountains, passing through the expanse of the Burren Park before descending once more into the town of Blacklion. The views along the route, of Lough Macnean to the north and towards Cuilcagh Mountains on the border of Fermanagh and Cavan, are tremendous.

The paths here are typically quiet, allowing for plenty of time to savour the enchantment of the region, so different from the terrain where the Beara Breifne Way begins. In this way, it’s a perfect summation of the varied and beautiful experiences on offer in Ireland’s Hidden Heartlands.

As the way ends in Blacklion, Co Cavan, you can reward yourself for your efforts with a sumptuous meal at MacNean House and Restaurant, Nevin Maguire’s award-winning restaurant. A luxurious meal of scallops, with pork cheek, or halibut with basil risotto, is a mouth-watering end to an unforgettable adventure on the Beara Breifne Way.

As they saying goes, the real adventure isn’t necessarily in the destination but in the journey you take to get there, and this couldn’t be truer when exploring nature. Across the Emerald Isle, you won’t find any sights quite as unique, alluring or relaxing as on the walking trails in Ireland’s Hidden Heartlands.

Find out more and start planning your trip on www.discoverireland.ie