The officer in crisp white uniform is gesticulating wildly toward us and shouting in the hot wind. His stance is precarious, perched on the open ramp of the ferry, bouncing gently with a loud grating mechanical scrape on the quay, the sea splashing up onto his feet, the huge ferry's engines throttling for departure.

This giant ferry is waiting for us to board before departing, our delayed ferry from Paros to Mykonos having radioed ahead. We run across the hot quay of Mykonos Port, with seconds to spare pulling luggage behind us, to alight on the colossal ton of metal, now moving visibly toward the churning open water, accompanied by the commentary of a laptop hauling Greek business woman.

"It's okay, OKAY, happens all the time RUN RUN" 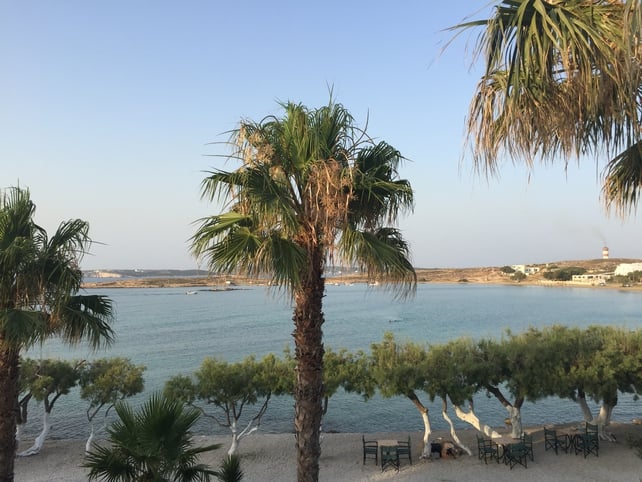 Above loom the upper decks of the Blue Star ferry to Syros, lined with travellers and backpackers watching the spectacle below.

In seconds we are inside the car deck, the huge door folding and closing behind us, the port now receding a few metres away. We have made it and we head up the stairs and out onto the deck to enjoy the journey, watching the waves, splashed salty faces munching on cheese flaky pastry pies. Ah, the wonders that are the Greek ferries, chaotic and brilliant, with relaxed efficiency, hundreds of them day and night, carrying thousands across the Aegean to the 3,000 islands.

Anyone who knows me is aware of my Greek Island Evangelism. I have been travelling to Greece since I was an interrailing student, arriving dusty with a giant rucksack and toothache onto a rusty hulk to travel overnight to Crete. Then on to the sugar cubed villages of the smaller Cyclades; Ios, Santorini, for beach camping and bartop dancing. 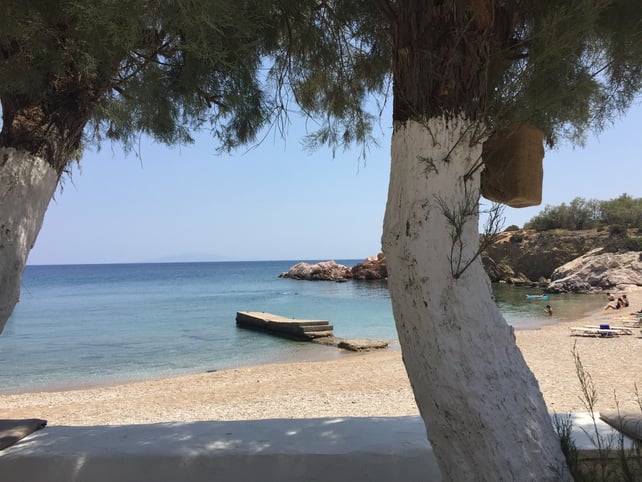 Actually getting to the Greek islands has always been the difficult part of the trip and as result it hasn’t been cheap, but now thankfully things have improved a LOT. After years of flying via London or Manchester, a more reasonable Irish route has been opened up thanks to both Ryanair and Aer Lingus both operating direct flights to Athens from June to September. And now, everything, including all ferry connections can be booked in advance online.

In latter years I upgraded to opting for connecting flights to the islands from Athens on Olympic airways, the extra expense offset by the fact of reaching your destination within 24 hours, and avoiding crossing Athens for The Battle of Piraeus Port. An early flight from London and a bit of eeny meany miney mo first lead me to fly to Paros XX (redacted) years ago, thus instigating a love affair with the coastal village of Naoussa that has not lost it's glow today.

This summer we opted for 5 nights in Kalypso, (€119/ night superior double w balcony)  a comfortable family run hotel just above Agii Anargiri beach, a few minutes walk to down to the square and old Venetian port, for fresh squid and all sorts of yummyness. 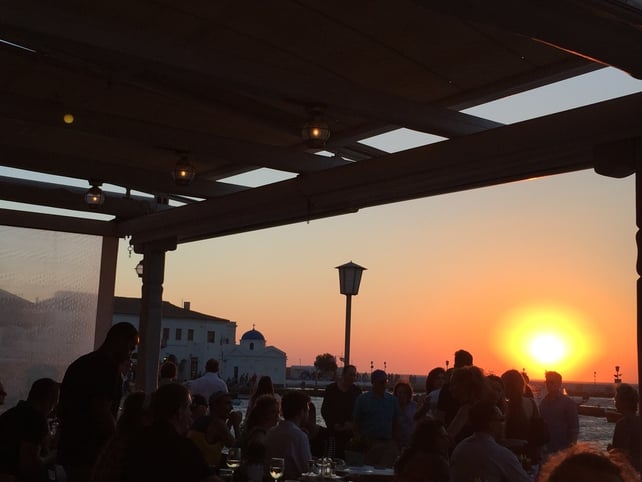 On my first visit to Naoussa I ate tiny fish on metal platters beside the caik boats that landed them hours earlier, watched from above by a black clothed grandmother, all washed down with retsina, before moving on to dance in Linardos tiny whitewashed club with the window that actually jutted into the dark sea. I had never seen anywhere so magical.

The elderly lady, after years of soap opera watching above us is now sadly absent, her balcony converted into a trendy bar overlooking the fish restaurants. Gourmet globetrotters have made Naoussa a destination of choice with terrific food the norm in restaurants such as the traditional Ouzeri Ton Naftikon, the fashionable Barbarossa and the wonderfully named Sigi Ihthios or '...Silence of the Fish'. The higgledy whitewashed lanes lead into many more bars on the seafront, perfect for a glass while djs spin mixes over the foam.

Like a trooper, Linardos is still there, opening at 1am, waves splashing in the window, and we even got to have a late one there this year.

The small fishing boats still tie up at the port square and they depart nightly, their bright lights attracting the shellfish and squid. By day, the retired caiks ferry visitors over to the beaches on the other side of the bay; the volcanic rock formations of Koloumbithres, the perfect Cycladian church and azure waters of Monastiri, the long exposed thin stretch of sand of Lageri. 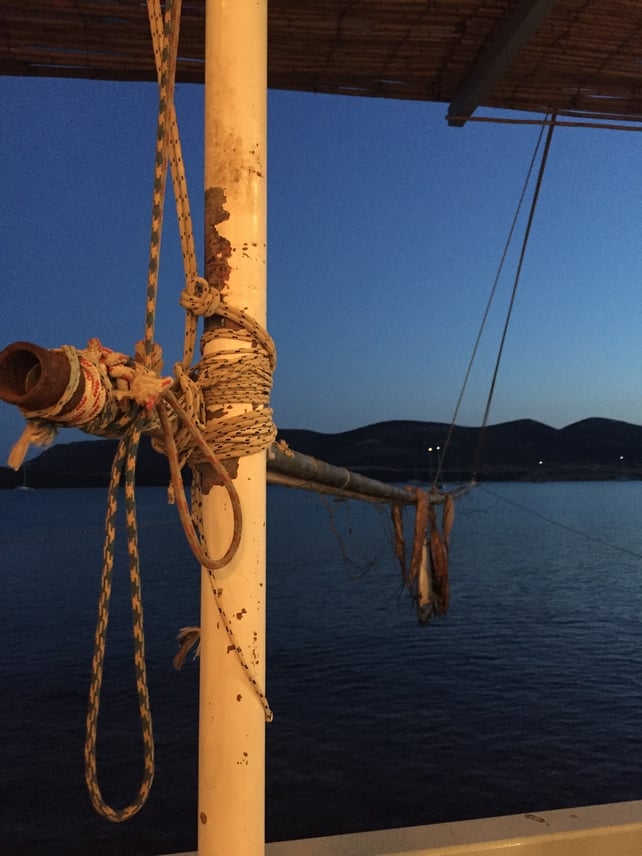 While Naoussa has certainly grown it has as we would say not lost the run of itself; Accommodation of all kinds and prices is available but there is nothing high rise and ferries and buses are still met by sign waving potential hosts offering simple rooms for the night.

Some years of recession seem to have abated and the irony was not lost on us to be watching Brexit coverage, with bewildered Paros citizens shaking their heads.

While Greece is not the bargain basement destination it once was, it has shook off the inflationary years and settled on a mid range price range; an above average seafood dinner for 2 including a local bottle of Moratis local organic wine will set you back around 60 euros.

Local flights to the islands with Olympic airways are pricey at about 90 euros a head one way but at the time of writing a new Paros airport is opening, allowing bigger flights and therefore better prices. The good news as our taxi driver pointed out is that the airport is NOT international so Paros should not go the overblown way of say Mykonos or Santorini. (Irony alert: since the bailout a *German company has won the contract to run the newly privatised island airports.)

We had never been to Antiparos, Paros' brilliantly named neighbouring island so this year we decided it was simply rude to overlook it any longer. The island is accessible from Pounda in Paros via a ten minute small car ferry, costing all of €1.30 per person. Long and quieter, it is again strikingly beautiful with beaches, two small areas of accommodation and many goats.

I booked the Beach House boutique hotel online and we spent three pretty luxurious nights there, our air conditioned large room and balcony overlooking the pebbly beach and restaurant. A generous and fresh breakfast was included in the price, at €200 a night not cheap but very nice indeed.

By day we swam and snorkled and ate outdoors in the curiously named Watergate restaurant, watching the kids jump off the old pier. Yoga classes are available morning and evening (hipster alert) and the extremely attentive owner was to be seen walking the beach in the evening seeking out stray cigarette butts or litter.

St Giorgios is the sparse enclave opposite the now uninhabited island of Despotika (that's right, where the Despots and Apollo lived, but not at the same time) which boasts the almost infamous restaurant of Captain Pipinos. It sounds like a cliche and it feels like one when the blinds are raised to view the stunning sunset. But! The food. And the view. And I even got a full local wine info session courtesy of the owner. 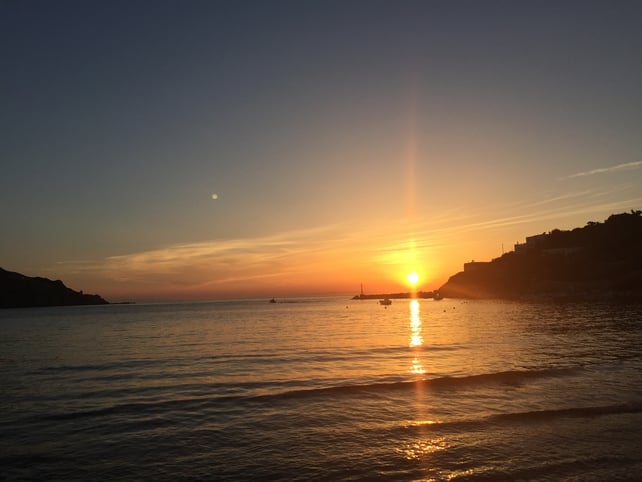 Our pin the tail on the donkey destination was Syros. One of the more western Cyclades, we got there by three ferries, the two big ones via Tinos and Mykonos (see above). Nothing prepared us for our arrival at this lump of red rock jutting out of the sea.

The large Venetian and classical port of Ermoupoli crawled up the mountain in layers, pink stone glittering in the sun in stark contrast to the shimmering white of our two previous destinations. A massive shipyard swung its cranes across hulks of metal under construction. Where. The hell. Had I brought us?

(Well. First mentioned in Homer’s Odyssey, Syros has been a vital island for trade and culture for thousands of years, it’s deep water harbour was prized by many ‘tourists’, up to and including the occupying forces of the *Germans in the Second World War. We have vowed to return and to spend a few nights in the intriguing Ermoupoli (The City of Hermes) and visit the opera house. You heard me. OPERA.)

Our taxi shot up the pink mountain at a zig zagging speed, reached the top, passed a fluttering stiff Greek flag and tilted down the other side, lurching from hairpin corner to corner. Down, down to Kini, a tiny seaside village on a beach.

I had booked Pino Di Loto, one of 5 bungalows on a cliff side above Kini. (€187 a night for a bungalow) It was hot. Hotter than the inside of a toasted cheese sandwich hot. My vertiginous ways twitched nervously but once we side footed down the hill to the village we found a gem. Kini. A beach, with kids still splashing in the water at 11 at night, two great restaurants, a few cafes, one shop.

And an aquarium. Funded by the EU too. Well obviously. 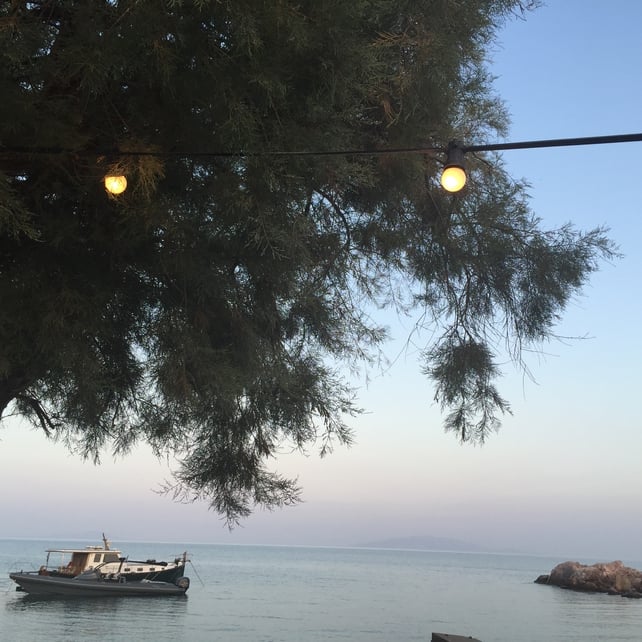 You know the day you just go horizontal and start to dribble? Well that was Kini. Our hosts, Terezin and her Dad were lovely and full of informative chats. The food was fresh and the pool cool. The kittens were adorably ridiculous and the view? Mesmerising.

As for the two restaurants right on the water; Dyo Tzitzikia Sta Armyrikia 'Two Crickets of St Nicholas' and Allou Yialou 'The Allure of ???'. (It’s the allure of something, maybe the view.)

Will that be barbecued squid in feta fennel and ouzo sauce? Two, Parakalo.

After Syros, our one night in Mykonos felt like Manhattan and not in a great way. Yes Mykonos is still pretty, yes it's the gay nightlife mecca of Greece, yes every cruise ship docks and everyone takes photos of the pelicans. But as our Paros taxi driver said, the international airport, cruise ships and thousands of tourists means that it has developed notions. And even Jackie Os bar, one of the great bars of the world; well this time we found the staff a little um, too cool for school. Ah here.

(We stayed one night in The Mykonos View; at €207 for a small double room, inexpensive at Mykonos prices.)

One night on Mykonos was fine and the huge plus was that a flight back to Athens at 11.30am meant we connected with Aer Lingus at 2.40pm and were back in Dublin by 6pm.