Istanbul is a fascinating hybrid between Europe and the Middle East. Located on the shores of the Bosphorus, the city is perched in both regions, and defining it as either is impossible.

If one were to draw a Venn diagram for both areas, the union between both would be Istanbul.

Walking the streets of the cultural capital of Turkey, one sees women clad in headscarves and hijabs, walking side-by-side with ladies in mini-skirts and plunging-neck blouses.

Mosques with towering minarets are located adjacent to rooftop bars serving cocktails, where customers wear the latest European and US fashions.

This juxtaposition of east and west, and ancient and modern, lends a distinctiveness and uniqueness to the city that is at once enveloping and confusing, and makes it a traveller’s paradise for those very reasons.

Travelling in from either of Istanbul’s two major airports, the vastness of this 14 million strong mega-city becomes apparent, as does the chaos of it. I entered the city at 22:00 on a Monday night, to be greeted by three hours worth of traffic just to make my way to the historic centre, Sultanahmet, where I was based for my stay.

The city is rapidly modernising and expanding and the traffic is the first indicator that the place is humming and buzzing: a feeling that encapsulates the vibrancy of the metropolis.

The sights in Sultanahmet are dotted around the area, and there are many, but a few stand out as highlights.

The Aya Sofya began its life as a Greek Orthodox Church, before becoming a mosque. It’s now a museum, which has been carefully restored to maintain the Byzantine sixth century structure.

Its crumbling grandeur is very specific in that it started as a place of worship for Christians before morphing into a Muslim place of prayer - that fact gives it a uniqueness of all of its own. 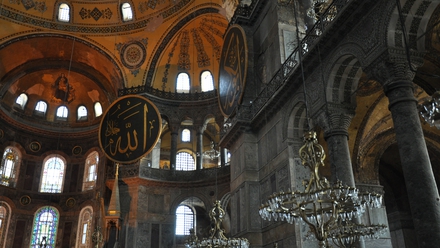 The interior of the Aya Sofya

By contrast, just opposite the Aya is the Blue Mosque, which is very much a working place of prayer for Istanbul’s citizens. The stark minimalism of the 17th century building is in contrast to the Aya and the beauty of its sparseness is worth seeing. There are allotted times when members of the public can get in, and it’s worth doing. 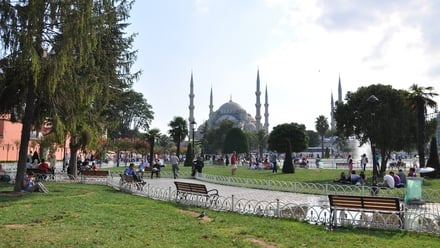 Also in the old centre is Topkapi Palace. This was the home of the sultans and their wives from 1465-1830 and gives an insight into the opulent and extravagant lives of both. The huge complex is in immaculate condition and staggeringly beautiful. A few hours spent here will give you an appreciation of the lavish lives lived there and also what it was like to be one of several wives in a harem trying to work their way up the order of merit - so to speak.

Shopping in Istanbul is a frenetic experience, as sellers haggle and barter with you over prices and you try your best not to pay three times over the odds. Despite that, it's fun, and worth it for the cultural experience. The Grand Bazaar sells everything from silk to Cristiano Ronaldo football shirts and a stroll through is worth it. If you want to take home the taste of Turkey head to the nearby Spice Bazaar. 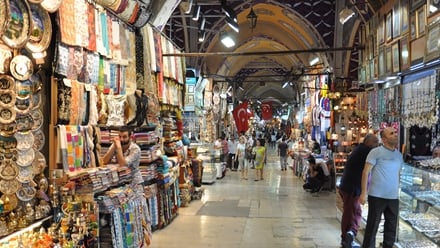 Also worth a peak in Sultanahmet is the Basilica Cistern. Built in the 5th century it was designed to hold water for the Great Palace and is a beautifully ornate underground structure that is tastefully maintained and artistically lit.

Sultanahmet is fascinating, but in order to see the modern Istanbul, one must venture across the Golden Horn – an inlet of water that separates the European side of Istanbul – to take in Beyoglu.

A walk across Galata Bridge, or a trip on the tram, takes you to the other side, where one can glimpse inside the life of the city that has high-end shops, and the buzz of a major western European city – almost anyway, the calls to prayer are a constant reminder that this city is a city with Islam at its core.

Taksim Square - famous for the anti-government protests of 2013 - is a good place to start meandering down through the streets of the area known as Beyoglu. From Taksim the Istiklal Caddesi is the main throughfare, and shopping area. Walking along here you can take in the fashions and vibe of the city, dropping into international retail stores. From the end of the street, narrow side roads drop down towards the Golden Horn and pass the Galata Tower, a 14th century construction that can be climbed and gives fantastic views of the city. 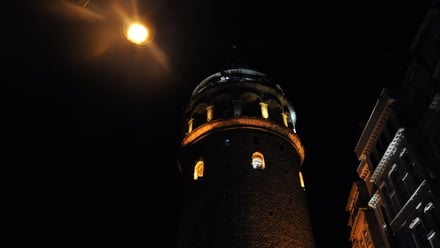 On the same side of the city also lies the Istanbul Museum of Modern Art in Karakoy – a less trumpeted but superb attraction to visit. Exhibiting a collection of art, sculpture, installations and photography, the museum is a highlight of the city in my eyes. Not only is the building itself a fascinating, bare, white construction, but also the works on display give a superb insight into the minds of Turkey’s modern artists. It is also boasts magnificent views back across the Golden Horn towards the Topkapi Palace. 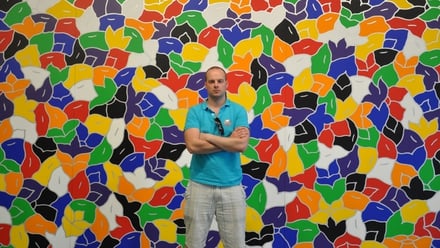 Tadhg Peavoy at the Istanbul Museum of Modern Art

Also in Karakoy one can eat and drink in two fine establishments. Lokanta Maya is one of the best eateries in the city, serving modern Turkish fusion. And just down the road is Karakoy Lokantasi, head there after dinner for some drinks and a slice of authentic late-night Istanbul banter.

One of the most intriguing trips to take in the city is out onto the water of the Bosphorus, to one of the city’s islands - known as the Princes’ Islands. These are the spots where the city’s inhabitants get away from it all. Ferries leave for the islands from Karakoy and run for the day. 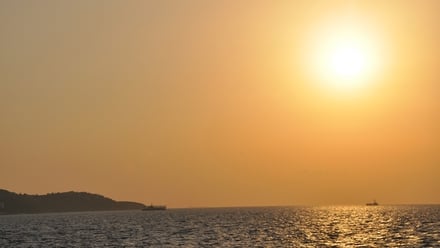 The sun sets over the Bosphorus

It takes around an hour to get out to the last island, Buyukada, but the journey is well worth it. It’s essentially rural Turkey, with a small village built around an Ottoman port. Horse and carts are the method of transport around the car-free island, which gives the pace a sedate and calm feel. Grab one and ask the driver to bring you to Club Mavi Restaurant and Hotel. It’s located at the far side of the island and takes a half hour to reach.

Along the way you’ll pass little hamlets and beautiful 1930s-built homes, before reaching your destination. The restaurant is located in a field, with awnings covering a few tables that are perched on the edge of the island, which looks out over the Bosphorus.  It’s a stunning view and you’re likely to have the place almost to yourself. Order a meze, grilled meat and a vegetarian dish and enjoy feeling like being in the middle of nowhere with the buzz of one of the world’s great cities just a short ferry journey away. 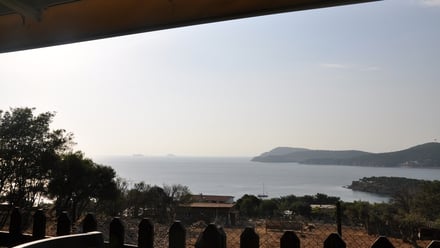 The view from Club Mavi Restaurant and Hotel

Having sampled both European sides of the city, and the islands, it’s also worth getting over to the Asian side. Ferries run on short journeys from one continent to the other and are cheap and reliable.

When there, walking the streets around Kadikoy is my recommendation. They’re lined with bars and restaurants and offer one of the blue-collar delights of the city: street food. Stuffed mussels, deep fried mussels, sheep intestine and curry hamburgers are all on offer. Doing a round of the eateries Anthony Bourdain-style will leave you needing a drink. So head to Kafka’s rooftop bar, sit back and look out on the water that separates two continents, contemplating how wonderfully diverse this great city is.

Words and photography by Tadhg Peavoy.