Growing up on the other side of Dublin Bay, Dún Laoghaire was only ever a place to go to get somewhere else – the short hop to Holyhead, the gateway to many a childhood adventure throughout England, France and beyond.

And here I was again, rolling down the ramp at Dún Laoghaire marina into the still harbour waters, but this time it was not a ferry that I was boarding but rather hopping onto what looked like an oversized surfboard for an introductory lesson in the art of Stand-Up Paddleboarding (SUP).

SUP has seen a steady increase in Ireland over the past few years and while the west coast is renowned for its big wave surfing, the conditions are ideal for paddleboarding along the stretch of Dublin’s coast from Seapoint to Dún Laoghaire. 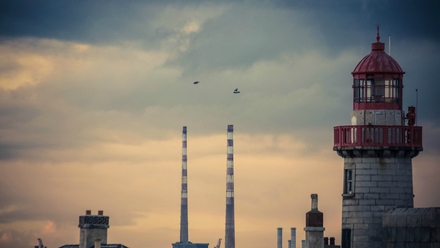 And having spent an entire week trying to stand up on an actual surfboard, with little success, on a recent trip to Fuerteventura, I was pleasantly surprised how straightforward the SUP technique proved.

Within a minute, I was in motion, kneeling on the board and paddling through the berthed boats in the harbour, and soon after I was upstanding and working on my stroke as the gondola-esque paddleboard requires a full movement from front to back, changing sides every three or four repetitions. 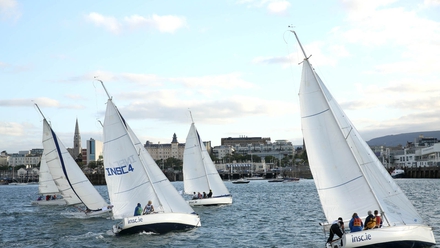 There was, of course, plenty of calamitous capsizes and I was not surprised to learn that SUP provides a total-body workout, builds balance, coordination and endurance, while burning fat in the form of 600-1000 calories per hour.

I certainly worked through those calories, just trying to get out of the water and back into the standing position, but as your technique improves, you can really feel your body relax as you can forget about what’s below and enjoy the surroundings and the superb range of vistas on show.

It also proves the perfect way to unwind, de-stress and leave the worries of work behind you, and proved the ideal start to my weekend in Dún Laoghaire. 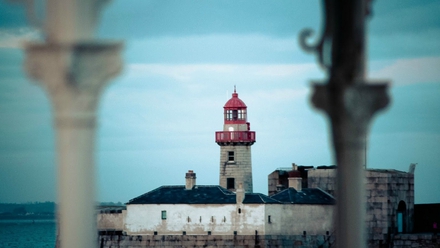 Back on terra firma and eventually extracting myself from the skin-tight wetsuit (not a pretty sight), the night’s surfing generally finishes with a group barbeque.

The Aboveboard premises are certainly in the embryonic stages of development, but there are ambitious and interesting plans afoot and they have already erected an elevated decking area, where you can reflect on your evening in the water and take advantage of the spectacular views of the changing colours amidst the flat waters of Dublin Bay, watching the sun set behind the city’s skyline.

Up early and again I was drawn to the water – this time the more salubrious setting of Royal St George’s Yacht Club for a sailing excursion. 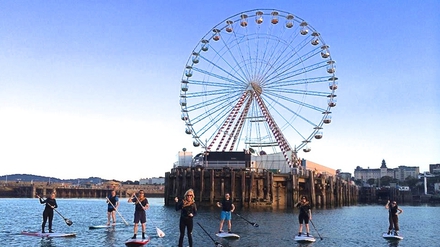 A group of six were brought down, kitted out and sent off to sea – well, not really straying too far from home – yet the wind whipped up once around into the exposed stretch and we were certainly sailing in no time at all.

Everyone on board had a job to do as the skipper shouted instructions. Tack, jib, up, down, over, under, I was certainly not a natural in the noble art of sailing, and always with one eye on that ever-rotating boom that I was sure was out to get me.

The sailing taster certainly opened my eyes to the strength and concentration needed when out amongst the elements and all the hard work is rewarded as you can enjoy long stints travelling with the wind, where your only job is to sit back and enjoy the endless views; the town of Dún Laoghaire resplendent, bathed in the September sunshine. 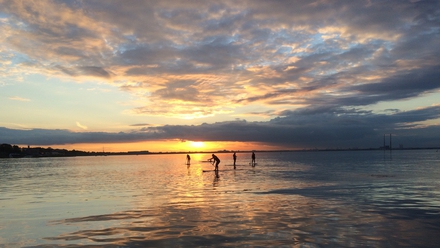 Lunch was taken in one of Dún Laoghaire’s most famous landmarks, the Royal Marine hotel, which sits majestically uphill from the harbour. The walk up through the rolling lawns of the hotel takes less than two minutes from the harbour, while our table returned the view back through the huge bay windows looking back at the coast.

The town was buzzing as the flocks of daytrippers were enjoying an always welcome Indian summer, and apart from the many watersport options available, there are several other attractions about Dún Laoghaire that will fill the afternoon with the Maritime Museum or the Shackleton Experience two of the best on offer, while a visit to the Pavillion Theatre proves a great night out in the town. 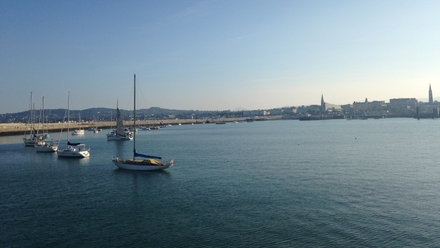 The weather was certainly keeping its end of the bargain as I took up residence on the terrace of Hartley’s restaurant for some pre-dinner drinks as the sun started its downward journey into the adjacent Dublin skyline.

Drinks were followed by an exquisite meal at the stylish harbour eatery and every item on the menu could have satisfied my palate as I opted for the shredded free-range Irish pork carnitas quesadilla to start followed by the beer battered fish and chips.

A lazy start to Sunday morning kicked into life after taking the plunge at another famous Dublin landmark, the Forty Foot. It’s a short stroll from Dún Laoghaire along the coast to Sandycove and even if you are not swimming, there is a great atmosphere and enthusiasm about the place as bathers of all ages indulge in the refreshing seaside splash.

By lunchtime, the throngs were back swarming about the coast and the pier, and many were heading in the direction of the People’s Park where a fine lunch can be enjoyed amidst a festival-like atmosphere.

A post lunch stroll out the main pier led to another must-do on a visit to Dún Laoghaire – procuring an ice cream from Teddy’s. As well as the main shop along the Sandycove seafront, Teddy’s have a range of vans dotted about the town so there is no getting away from fulfilling your ice cream obligation. 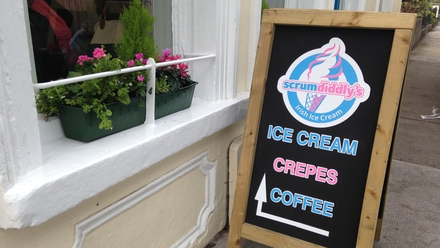 But there is also a new kid on the block in the Dún Laoghaire ice cream wars as Scrumdiddly’s has opened at the other end of town and you will rarely walk past without a queue spilling out the door and around the corner.

After two days of outdoor activities, it seemed appropriate to wind down and finish off my Dún Laoghaire visit with another al fresco adventure – a visit to the beer garden.

And the sun-soaked terrace at the front of the Kingston Hotel must be one of the best beer gardens in Dublin, as you can enjoy the final hours of sunshine sipping an ice-cold cider in great company.

Dinner reservations were made and as the darkness descended over the town, we were welcomed by the warm glow emanating from the brick-domed oven of Oliveto Italian restaurant.

There was no need to look at the menu. I’d be having the pizza.

Where to stay: The Royal Marine is a four-star hotel in the heart of Dún Laoghaire and another famous landmark of this Dublin suburb. www.royalmarine.ie 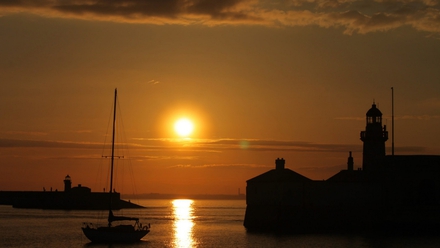