When traveling in India one has to exercise blind faith so much more than in any other place I’ve been. Whether it’s trusting a speeding bus driver to navigate dangerous mountain roads or eating at a restaurant that displays questionable hygiene standards, one has to surrender to the unfamiliar ways of this unpredictable society. But never before had I to exercise blind faith to the extent I did when hot butter was being poured into my eyes.

It was day two of a 14 day panchakarma cleanse and I lay vulnerable on an ancient wooden massage table in India's mountain town of Rishikesh. Gita, my therapist, a small and stocky Indian lady, instructed me with broken English ‘eye open, eye no open’. Chapatti dough surrounded my eyes which acted as a wall to stop the butter running down my face and all I could hear was the disconcerting sound of the butter sizzle on the pan beside me.

Thoughts came thick and fast and I began to question the safety of this procedure. I wondered what if Gitta left the butter on the pan just a few seconds too long. Could my sight get damaged? Could I be blinded? I know I like to try new things but maybe this time I’ve gone too far. Then, plop, the first drop of butter landed in my left eye. 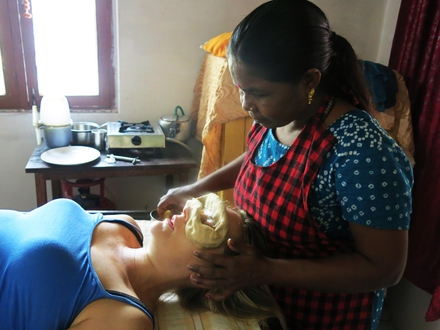 I survived this encounter vision intact and it was just one of many unfamiliar cleansing methods I experienced on this programme.

Panchakarma is a cleansing and rejuvenating process used in Ayurvedic medicine, the traditional system of medicine practiced in India for more that 5,000 years. Despite being around for so long it has only recently gained popularity in the west with celebrities such as Madonna, Cherie Blair and Jade Jagger highlighting its merits. Ayurveda’s literal translation is ‘the science of life’, and its roots go back to the Vedas one of Hinduism’s sacred texts. It’s a holistic approach which emphasises health on mental, physical and spiritual levels. It claims that if any of these levels are imbalanced, the other two will be affected.

My hour and a half long consultation with Dr.Usha started out orthodox enough with an examination of my tongue, pulse and eyes. She then went on to ask me a whole range of questions, mostly to do with my diet, lifestyle and emotional well being. Some of which I’d be shocked if I heard a GP ask: ‘How do you react in conflict situations?’ and ‘Do you ever dream of flying or running?’

Ayurveda believes that people’s constitutions fall into three different types or doshas, known as Vata (air), Pitta (fire) and Kapha (water). A panchakarma treatment is tailor-made for your dosha and claims to work on the whole body, bringing it into balance by releasing and draining toxins. This is done primarily with the use various types of medicated oil used internally and externally to dislodge the toxins and help eliminate them. Diet, meditation and yoga also form a part of the therapy. 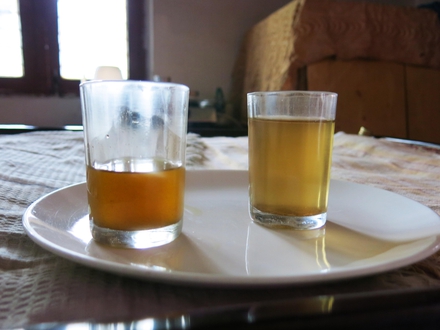 The diagnoses was a vata pitta imbalance. Apparently this means my inherent disposition is quick, humorous and talkative. I was less pleased to hear about my tendencies towards anger, stress and nervousness. The treatment prescribed was a 14 day cleanse, a course of five different herbs and a specific diet that included eliminating onions, garlic and potatoes.

Each day I dragged my vata pitta self up a hill in Rishikesh’s 40 degree heat to  Dr.Usha’s treatment rooms. Rishikesh is a Himalayan town in Northern India that claims to be ‘The Yoga Capital of the World’. And just like yoga is sold on every street corner, so to are panchakarma cleanses. Dr. Usha’s clinic is a modest two bed bay in need of a lick of paint. For more luxurious and peaceful surroundings many people tend to do residential panchakarma treatments in the Indian southern state of Kerala, the home of ayurveda. 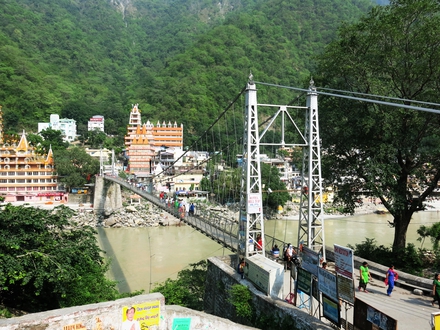 Don’t even consider doing a panchakarma if you're someone who is shy getting dressed in shared changing room. You will be expected to be naked for your treatments, and in Dr.Ushas clinic there was not a paper knicker or fluffy robes in sight. This was spa treatments without the frills.

Unaccustomed to this I stripped down to my underwear on the first day until Gitta looked at me disapprovingly and said ‘no, no, everything off’. It wasn’t long before I got used to sitting on a stool in my birthday suit getting my head slapped for my daily head massage.

Other daily treatment was a full body massage followed by a steam. In the massage the skin is saturated with medicated oils to help dislodge the toxins from the body tissues. Feeling like a plump oily olive I slid around the bed in a semi conscious state before being popped into the steamer to cook. The makeshift steam room was a humble looking wooden box attached to a pressure cooker and it did the job perfectly.

On alternate days I had my ears or eyes oiled. Both were strange and uncomfortable sensations. When my mind questioned the validity of these methods, which it regularly did, I reassured myself that people have being doing these treatments for thousands of years and tried to surrender to it, a tactic I employed a lot in India.

Each day I left the clinic feeling greasy; oily clothes, skin, hair, ears and eyes. Dr. Usha assured me that it was all for a greater good and that ‘oil is to the body what love is to the soul’. It didn’t feel like loving especially on days when the treatment affected my energy levels.

But even if the panchakarma wasn’t working on my body it was already permeating my fashion sense. On the three days I got shirodhara I wore a turban to soak up the excess oil dripping from my head. Shirodhara is a treatment where warm oil is dropped onto pressure points on the forehead. For those days I didn't get my beloved massage but thankfully shirodhara was just as relaxing.

Shirodhara was accompanied by ‘internal oilation’ which meant I had to drink a cocktail of oil and herbs which had a laxative effect. Years of drinking shots came in handy and I downed it in one. 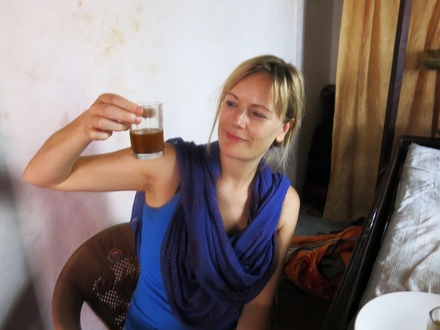 Gitta then brought me to a room near by the clinic where I spent the next five hours running to the loo with guts cramping. It was a tough day and I felt wretched. Again, I questioned why I was putting myself through with what felt like a voluntary form of torture.

That marked the end of week one which was meant to put my pitta inline. The vata treatment was next and saw a welcome return of my daily massage. But that was just the silver lining of the cloud that came by the way of enemas. Dr.Usha announced with inappropriate cheerfulness that I would be having alternative days of ‘small’ and ‘big’ enemas. Obviously the latter was the more problematic, with volumes of up to two litres of oily herbs being pumped into me.

Anyone who tells you that panchakarma is luxurious and relaxing are either lying or unlike me have a perfectly balanced body. Yes you have a massage each day but that's about as extravagant as it gets and the detoxifying effects of the treatments leave you feeling low and lethargic.

That said, I would go through it all again as once it was over I was left feeling pretty amazing. Just like a car after a good service everything seemed to run a bit smoother; my digestive system was very well behaved, I had more energy, slept better and my skin was glowing. But when I do another panchakarma I will go to a residential treatment centre so I can rest up and allow the treatment to do its job with no stress or distractions around me. And this time I will go with faith and eyes wide open.

Deirdre paid R1,000 (approximately €12) per day for her treatment at Ayurveda Nirvana http://ayurvedanirvana.com