Rare footage of the last-known Tasmanian Tiger, a species believed to have died out over 70 years ago, has been released by the National Film and Sound Archive of Australia (NFSA).

The video was filmed as part of a travelogue called "Tasmania The Wonderland," and featured Benjamin the Tasmanian Tiger or thylacine, its other name.

The 21-second black-and-white clip shows Benjamin pacing around his cage at Beaumaris Zoo in Hobart Tasmania, where he was the last-known member of his species.

We have released 21-second newsreel clip featuring the last known images of the extinct Thylacine, filmed in 1935, has been digitised in 4K and released.

Only a few months after this footage was filmed, Benjamin passed away on September 7 1936. Another Tasmanian Tiger, housed in the London Zoo, passed away in 1931, so with Benjamin it is widely believed the species died out.

That said, Tasmania's Department of Primary Industries, Parks, Water and Environment released a document in October that noted eight reported sightings in the past few years.

As clear from the footage, the Tasmanian Tiger was a truly striking creature, resembling a cross between a fox, a wolf and a large cat. Its "straight, unjointed tail" is also a defining feature, as the narrator of the film says. 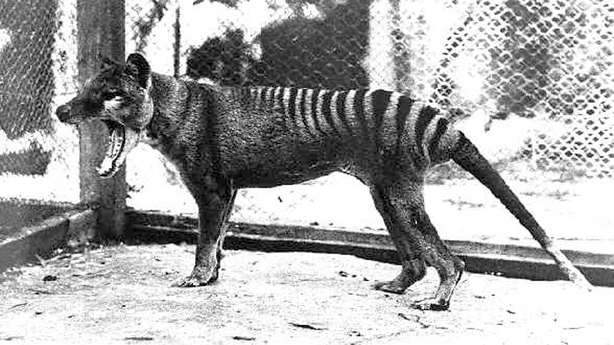 With a long snout and stripes on its lower back, they were skilled hunters, chasing down kangaroos and other marsupials, along with small birds and rodents. Like other marsupials, they also had a pouch in their stomach for carrying their young.

They were common across continental Australia for as many as 2,000 years, but started to die out due to hunting by humans and "the march of civilisation", in the words of the narrator.

Even as it moved to the island of Tasmania, it was considered a pest, as dogs were introduced to the wildlife and humans continued to hunt them down. As it stands, there is no colour footage of the thylacine available to us, however experts say thy had yellow-toned brown fur.