Bosco di San Francesco (the woods of St Francis) are situated behind the Basilica in Assisi where all the pilgrims and tourists visit.  It is easily missed, but a steep path takes you deeper into the woods and it is the most amazingly spiritual & peaceful place on the planet.

The Bosco di San Francesco is run by FAI (which is the equivalent of the British National Trust).  They have reclaimed 64 hectares of ground and there in the middle of it all they have an amazing Land Art installation called the Terzo Paradiso (the 3rd paradise).  Created by famous Italian artist Michelangelo Pistoletto, it contains three circles of olive trees - the third one overlapping the other two; it represents the birth of a new earth, creating a union of nature and human intelligence, to come away from consumerism and the earth's destruction.

The Bosco di San Francesco is an intact portion of Umbrian landscape at the foot of the Basilica of San Francesco in Assisi.  The property of the FAI (Fondo Ambiente Italiano), it extends over 64 hectares of agro-silvo-pastoral landscape, crossed by about 5km of paths that allow a visit to the valley of the Tescio torrent, and to the wooded hillsides overlooking it.

In the property there are extensive forests of hornbeams, holm oaks and downy oaks, alternated with olive groves and clearings, which through neglect had been reduced to a landfill.  The FAI, after a donation from the Banking Institute in 2008, has completely restored, recovered the area, which was reopened to the public in 2011.

At the foot of the Basilica, there is evidence of a medieval microcosm inhabited by Benedictine nuns between 1200 and 1600: a monastery (site of the FAI information point), the small Romanesque church of Santa Croce, the remains of a hospital that assisted the sick and pilgrims, a mill active until the early 1900s (which now houses a restaurant where you can eat) and a little further on, a fourteenth-century tower built to defend a factory.

In the clearing where the medieval tower is located, it is possible to admire the work of land art, the "Third Paradise" by the master Michelangelo Pistoletto, consisting of 121 olive trees arranged in a double row to form three large circular elements tangent to each other, the largest in the middle and with a 12 meter high pole to symbolize the union between heaven and earth.  The invitation is to walk through the serpentine between the rows, and thus become part of the work that contains a proposal for reflection on the possible serene coexistence between man and nature, here symbolized by the third sphere: the "third paradise".

Thanks to the recovery of abandoned olive groves and careful management of environmental sustainability by the FAI, a quality extra virgin olive oil is produced in the Bosco di San Francesco.

The Bosco di San Francesco is so-called because of its proximity to the Basilica.  It is adjacent to the medieval city of Assisi - one of the most important places for Christianity since it houses the Basilica of San Francesco, where the tomb of the most venerated Saint Assisi lies.  In the city, which has intact medieval walls, there are places of great religious and historical interest, such as Basilica of Santa Chiara, the Cathedral of San Rufino, San Damiano (the church sheltered by San Francesco), the Roman Temple of Minerva and the area of the Roman Forum, under the Piazza del Municipio, the Rocca Maggiore, and the neighborhood built on the Roman amphitheatre.

Outside the city of Assisi, on the road that leads to the summit of Mount Subasio, is the Eremo delle Carceri where Francis and his brothers prayed and meditated in caves in the rock.

At the foot of the City of Assisi is the Basilica of Santa Maria degli Angeli, a large 16th century church, and the Porziuncola, a small church sheltered by Francesco in 1205.  Inside the great Basilica is the famous rose garden without thorns.  Tradition has it that St. Francis threw himself into the rose garden to make an act of constriction, and the rose plants threw thorns so as not to hurt the saint, and so they have since grown inside the ancient garden.  Also inside the Basilica, in a niche, there is a statue of the holy poor man in his hands, a basket where a couple of doves nest each year. 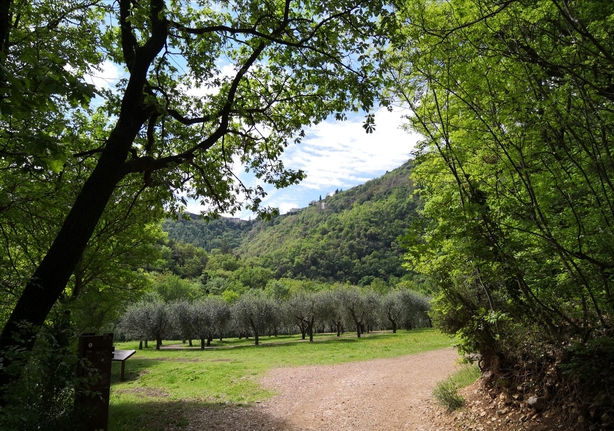 At about 10km from the Bosco di San Francesco there is Piandarca, near the town of Cannara, which is the place where tradition has it that St. Francis made the famous sermon to the birds; an evocative itinerary in the countryside, it can be reached on foot and by bicycle.

The property of the FAI falls within the confines of the Regional Park of Subasio, which protects the mountain massif of the same name.  The property includes part of the narrow valley of the Torrente Tescio, which has a North-South course, and the hilly slopes that overlook it.  Here the alternation of woods, clearings, watercourses and olive groves provide a wide ecosystemic variety that offers environments favorable to the presence of numerous animal and plant species.

In the Regional Park of M. Subasio, 83 species of nesting avifauna have been recorded, not all of which obviously belong to the FAI, but several of those that nest in the Bosco di San Francesco are of particular conservation interest.

Kate Liddy: Originally from Co. Down, Kate is now based in Muff, Co Donegal.  A retired social worker, she currently works as a CBT therapist and novice gardener.

The redstart in Umbria is a summer and nesting visitor; it arrives in our territory from the wintering areas around the first days of April.  It prefers open or semi-open environments, such as cultivated fields surrounded by hedges and thickets with sparse vegetation.  In the Bosco di San Francesco, it frequents in particular the area of the Benedictine complex of S. Croce, where the mosaic landscape simultaneously sees the presence of buildings, trees and open environments.  According to the most recent analysis, in the Umbria region the trend of the species is strongly increasing.

The serin in Umbria is a summer and nesting visitor; some individuals winter in the southernmost areas.  It nests in environments with dry and relatively warm summers; in the regional territory, the species is linked to the agricultural landscape where meadows and rows of trees and hedges alternate with crops.  In the Bosco di San Francesco, the serin visits open areas with scattered trees, typical of the traditional agricultural environment.  From the most recent analysis, in the Umbria region the trend of the species is moderately increasing.

The Hoopoe in Umbria is a summer and nesting visitor.  It typically frequents dry, semi-tree-lined, warm and sunny places, and in the area of the Bosco di San Francesco it is observed in the olive groves and meadows with scattered plants, near the woods where it nests in the trunks of the older trees.  The transformation of the traditional agricultural landscape towards intensive and extensive agriculture reduces the availability of environments suitable for the species.  According to the most recent analysis, in the Umbria region the trend of the species is stable.

This warbler in Umbria is a summer and nesting visitor, it arrives in our territory from the sub-Saharan wintering areas in the first days of April.  It prefers the edges of the woods and the open woodlands that are very sunny, on poor and shallow soils, arid or semi-arid.  In the Bosco di San Francesco he frequents the sunniest wooded slopes exposed to the south, especially in the area of the Benedictine complex of S. Croce and along the Torrente Tescio.  According to the most recent analyzes, in the Umbria region the trend of the species is moderately increasing.

The small Common Chiffchaff in Umbria is a summer and nesting visitor - some individuals winter in our region especially in wet environments.  It nests in woods rich in subsoil, hedges, clearings and shrubby formations; in the Bosco di San Francesco it frequents all the areas where the tree cover is continuous.  According to the most recent analyzes, in the Umbria region the trend of the species is moderately increasing.