Over the last ten weeks in the Great British Bake-Off tent  David Atherton has been Mr. Consistency. Last night, his cool, calm approach saw him crowned the winner of GBBO 2019. The 36-year-old health advisor from Yorkshire joined Ray D'Arcy to chat about kitchen meltdowns, Hollywood handshakes and his advice for future contestants.

David’s fellow finalists had six Star Baker awards between them going into last night’s final, while he had none. He’d famously finished second in just about every technical bake (until the final) and had garnered himself a bit of a reputation for being a little heavy-handed with spice. Fair to say he was the underdog, according to Ray – and David agreed.

CONGRATULATIONS DAVID.
If only all picnic baskets could look and taste that good! @britishbakeoff #GBBOFINAL https://t.co/8WRi1jADFJ pic.twitter.com/tmYhQIX85x

"That was probably the most positive thing for me because I didn’t feel any pressure. I was just really happy to be there thinking I didn’t really have a chance and I’m just going to enjoy this I’m in the final. At the end of the day, that’s probably the thing that gave me the edge."

While soufflés and spirits melted around him, David kept his focus and got the job done. Ray remarked that he was like that throughout the competition, wondering if he’s just a relaxed personality. Turns out remaining chilled while the heat in the kitchen soared, was part of David’s game plan from the start.

"I did tell myself right at the start, just be positive and enjoy it. It doesn’t help to have a meltdown. I didn’t think that I’d be able to do that, but it actually did work  … As I saw other people getting more stressed, I think that strengthened my resolve just to keep on going."

David’s day job working as a health advisor for an international development charity in Africa and Asia, was also something that gave him valuable perspective. The toughest day in the GBBO tent is still a far cry from working in some of the world’s poorest communities.

"I think that did help with the de-stressing, because at the end of the day, it is only a cake."

The class of GBBO 2019 seemed like a baker’s dozen of good eggs with contestants enjoying an atmosphere of camaraderie rather than competition. David, Henry and Michael were at the heart of this with their 'Least Laddy Lad Club’. Going into the show David hoped for friendship, but was surprised by the genuine connections he made and how encouraging all the bakers were.

"It’s really, really intense. What people don’t see is the exhaustion. Week after week, like I was working a full time job, trying to bake through until midnight, go and film all weekend, and then you do the same thing again. You’re really exhausted and so you really need the other bakers for support."

Friendships aside, when it comes to his highlight of the series, David has a clear, stand-out moment; the infamous Hollywood handshake. David was on the receiving end of this rare yet ringing endorsement in 1920s week, when Paul and Prue were bowled over by his Prohibition Amaretto Sour Cake.

"Getting the handshake was really special to me. Just because that’s a sign that one bake is perfection. I was nervous about that one because it was very time pressured, so yeah that felt really, really good … Paul is very, very technical so you know it’s not just that he likes something, he has to think that it’s technically good as well."

Now that he’s been in the iconic tent and come out victorious, Ray wondered what David would say to bakers considering entering next year’s competition.

"I waited so many years … don’t do that. No one is right for it when they’re applying. You learn so much during the audition process, all of the application and on the show, so just go for it, just apply."

You can listen to David’s interview in full, including his take on what happened to Steph, his plans for the future and his favourite way to burn off cake calories, on The Ray D’Arcy Show above. 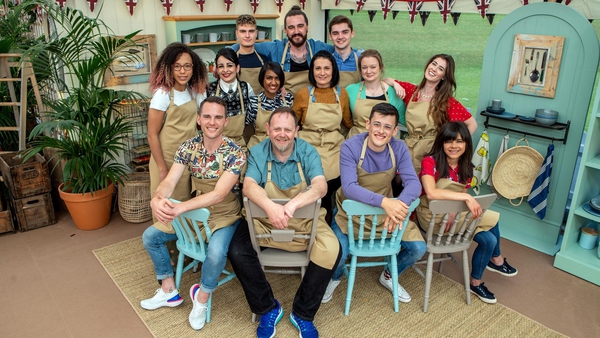 Winner of GBBO announced after tearful and dramatic final