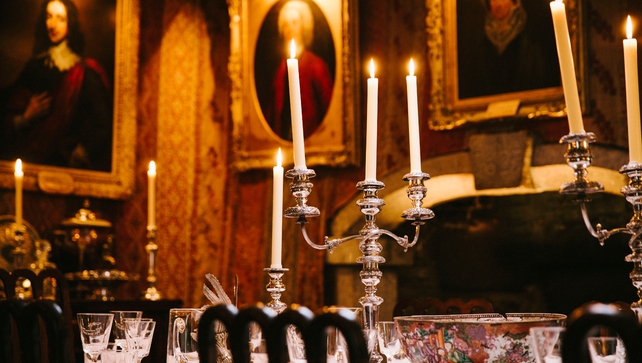 In the series chefs Catherine Fulvio, Paul Flynn and Derry Clarke recreate recipes from the 17th century to see how they hold up given the passing of time.

Brace yourself - these are not for the faint-hearted - lets just say there's blood, intrails, guts and pigs trotters involved!

To make an excellent Pottage

Take a leg of beef, and chop it into three pieces, then boil it in a pot with three pottles of spring-water, a few cloves, mace, and whole pepper.

After the pot is scum’d put in a bundle of sweet marjoram, rosemary, tyme, winter-savory, sage, and parsley bound up hard, some salt, and two or three great onions whole, then about an hour before dinner put in three marrow bones and thicken it with some strained oatmeal, or manchet slic’t and steeped with some gravy, strong broth, or some of the pottage.

Then a little before you dish it up, put into it a little fine powder of saffron, and give it a warm or two: dish it on large slices of French Bread, and dish the marrow bones on them in a fine clean large dish; then have two or three manchets cut into toasts, and being finely toasted, lay on the knuckle of beef in the middle of the dish, the marrow bones round about it, and the toasts round about the dish brim, serve it hot. 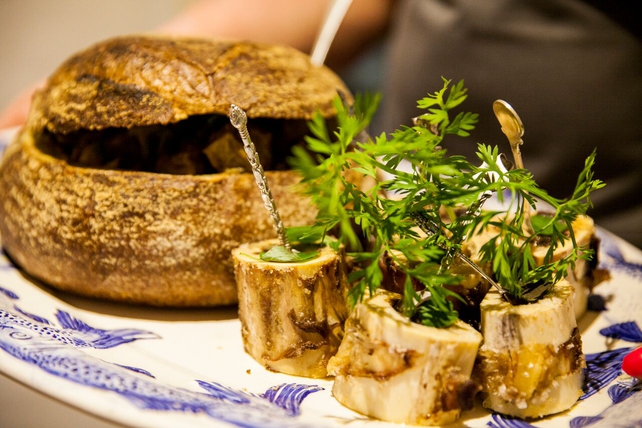 Take a gallon of fine flour, and a pint of good new ale barm or yeast, and put it to the flour, with the whites of six new laid eggs well beaten in a dish, and mixt with the barm in the middle of the flour, also three spoonfuls of fine salt; then warm some milk and fair water, and put to it, and make it up pretty stiff, being well wrought and worked up, cover it in a boul or tray with a warm cloth till your oven be hot; then make it up either in rouls, or fashion it in little wooden dishes and bake it, being baked in a quick oven, chip it hot. 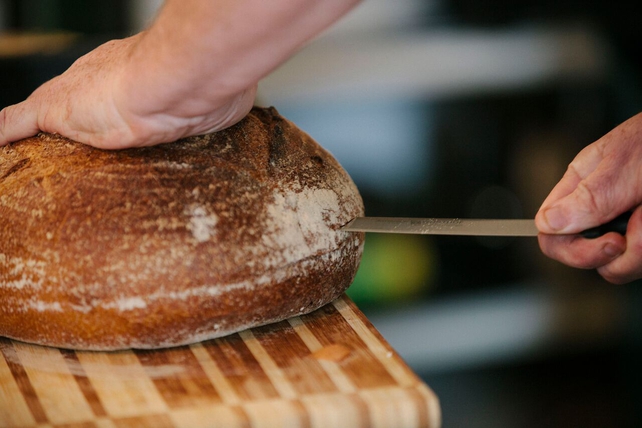 To Make a Hash of a Loyne of Lamb and to Force the Leg
Take a loyne of lamb and cut it into single bones, stew it in a pan covered with a little water and white wine and some large mace and a little pepper and shallot or onion, so stew it 'till 'tis very tender, when it is ready to dish, putt in some anchovie and a good piece of fresh butter, so shall it well together. To Make the Forst Meate
Take a leg of lamb and cut out all the meate leaving nothing but the skin and bone, shred this meate with a good deale of beefe shuett putt in a good many of sweete herbs shred very small some shallot a good deale, season it well with cloves and mace and nutmegs and a little peper and sault and some grated bread, 2 or 3 eggs beaten to bind it together, so put all this into the skin of the leg of lamb stuff it hard in and squer it up and roast it til tis browne and set it in the middle of the dish and putt the hash about it which is above written.

To boil a wilde or tame Goose
Take a goose and bone it, leave on the legs and wings, then make a farsing of some beef-suet or minced lard, some minced mutton or venison being finely minced with some sweet herbs, beaten nutmeg, pepper, cloves, and mace; then have some oysters parboil’d in their own liquor, mingle them amongst the minced meat, with some raw eggs, and fill the body of the fowl, prick it up close on the back, and boil it in a stewing-pan or deep dish, then put to the fowl some strong broth, large mace, white-wine, a few cloves, oyster-liquor, and some boil’d marrow; stew them all well together: then have oysters stewed by themselves with an onion or two, mace, pepper, butter, and a little white-wine.

Then have the bottoms of artichocks ready boil’d, and put in some beaten butter, and boil’d marrow; dish up the fowl on fine carved sippets, then broth them, garnish them with stewed oysters, marrow, artichocks, gooseberries, slic’t lemon, barberries or grapes and large mace; garnish the dish with grated bread, oysters, mace, lemon and artichocks, and run the fowl over with beaten butter. To make Oatmeal Pudding-pies
Steep oatmeal in warm milk three or four hours, then strain some blood into it of flesh, mix it with cream, and add to it suet minced small, sweet herbs chopped fine, as tyme, parsley, spinage, endive, pepper, cloves mace, fat beef-suet, and four eggs; mingle all together, and so bake them. 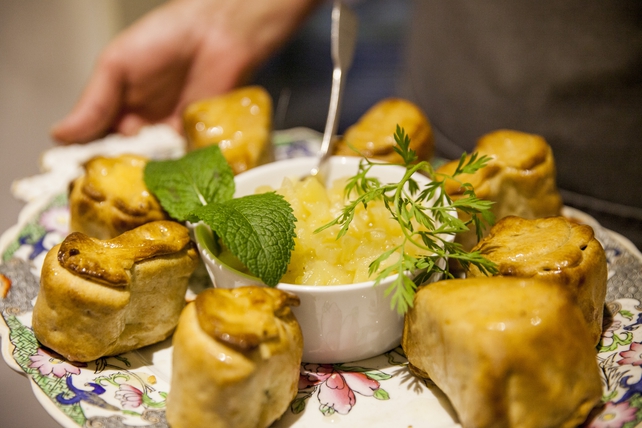 To make boiled Sallads
Boil some lettuce and spinage very tender, and mash them to pieces like the Pulp of an Apple, season them with Cinamon and Ginger and Sugar, put in Currans, a little Vinegar, and a piece of sweet Butter, stew these in a Dish, and when they begin to dry put in more Butter and a little Salt, so serve them to the Table. 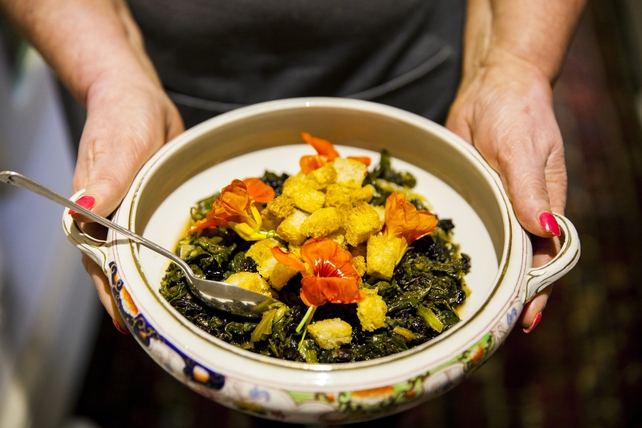 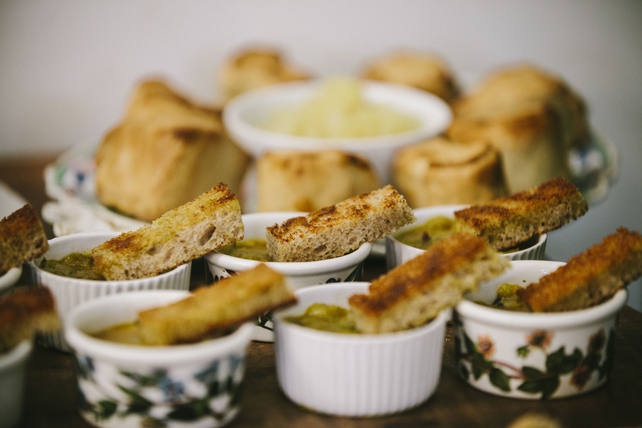 To bake Chickens (in pie)
Take six chicken peepers, if big cut them in quarters, then take three sweet-breads of veal slic’t very thin, three sheeps tongues boil’d tender, blanched and slic’t, with as much veal, as much mutton, six larks, twelve cocks combs, a pint of great oysters parboild and bearded, calves udder cut in pieces, and three marrow bones, season these foresaid materials with pepper, salt, and nutmeg, then fill them in a pie of the form as you see, and put on the top some chesnuts, marrow, large mace, grapes, or gooseberries; then have a little piece of veal and mince it with as much marrow, some grated bread, yolks of eggs, minced dates, salt, nutmeg, and some sweet marjoram, work up all with a little cream, make it up in little balls or rouls, put them in the pie, and put in a little mutton-gravy, some artichock bottoms, or the tops of boild sparagus, and a little butter; close up the pie and bake it, being baked liquor it with juyce of oranges, one lemon, and some claret wine, shake it well together, and so serve it. Take young artichocks or suckets, pare off all the outside as you pare an apple, and boil them tender, then take them up, and split them through the midst, do not take out the core, but lay the split side downward on a dry cloth to drain out the water; then mix a little flour with two or three yolks of eggs, beaten ginger, nutmeg & verjuyce, make it into batter and roul them well in it, then get some clarified butter, make it hot and fry them in it till they be brown. Make sauce with yolks of eggs, verjuyce or white-wine, cinamon, ginger, sugar, and a good piece of butter, keep it stirring upon the fire till it be thick, then dish them on white-bread toasts, put the caudle on them, and serve them up. To Dress a Carp

Take a carp that is a milter, cut it half off at the pole, pour some vinegar on it and let it bleed itself to death, save the blood but first scale it and rip it up, save the milt and cut the carpe in 3 pieces, rub it with sault, put the milt and your carp into a quart of claret wine, with a bunch of sweet herbs, large mace and an onion quartered, 2 cloves of garlick, 2 or 3 anchovies, boyle all these till they are enough, then take a quart of great oysters and stew them with an onion, a bunch of sweet herbs and some large mace, strayn the carps liquor it was stewed in, beat it up with a pound of fresh butter, pour it over the fish when it is layed in the dish and lay the oysters on it. To roast a Pig with the hair on

Take a pig and draw out his intrails or guts, liver and lights, draw him very clean at vent, and wipe him, cut off his feet, truss him, and prick up the belly close, spit it, and lay it to the fire, but scorch it not, being a quarter roasted, the skin will rise up in blisters from the flesh; then with your knife or hands pull off the skin and hair, and being clean flayed, cut slashes down to the bones, baste it with butter and cream, being but warm, then bread it with grated white bread, currans, sugar, and salt mixed together, and thus apply basting upon dregging, till the body be covered an inch thick; then the meat being throughly roasted, draw it and serve it up whole, with sauce made of wine-vinegar, whole cloves, cinamon, and sugar boiled to a syrrup. 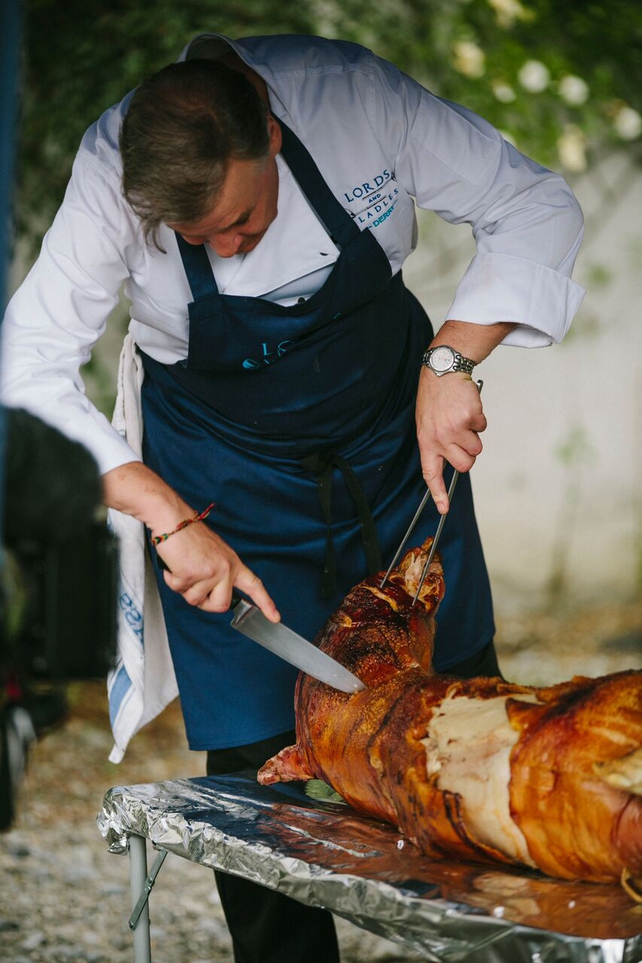 To make a brave Tart of several Sweet Meats 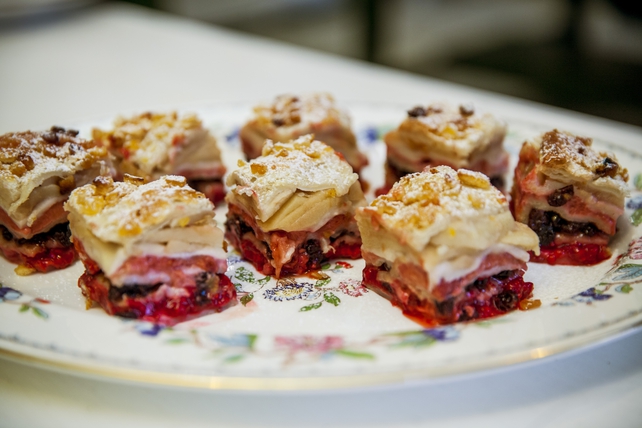 Take a pint of gooseberries before they are ripe, put them in a skillet with as much fair water as will cover them and boyle them till they are tender, then straine them and putt them into the skillet againe with a quart of sweet cream and when they boyle putt to them 5 yolks of eggs well beaten, stir them continually till they are as thick as you would have it, then season it and keepe it in your dish and if you think it too yellow leave out some of the eggs, serve it up cold. 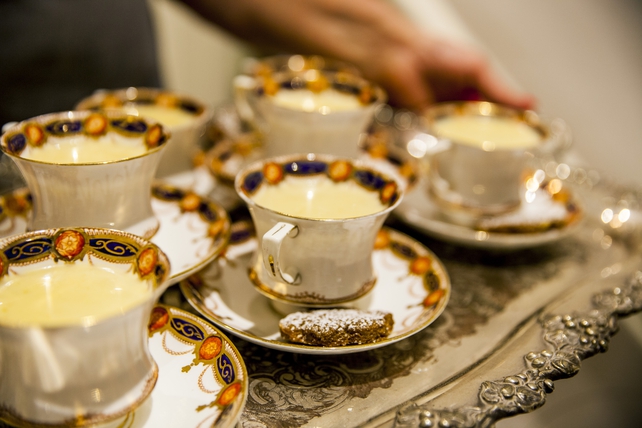 Take 3 pounds of flower, one pound of butter, one pound of sugar rubbed in very fine with two ounces of beaten ginger and a grated nutmeg, mix it with a pound of treacle and one quarter of a pint of creame stirred together over the fire, a quarter of a pound of citron, the like quantity of lemon and orange candied peal cut into small slices mixing it well, then make up your bread strip role it out and make them into thin cakes or roles, bake them in a slack oven upon tin plates. 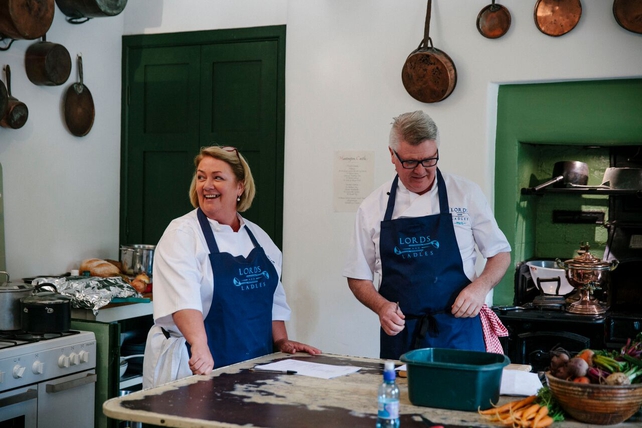 Tune into brand new Lords and Ladles on Sunday 18th of September at 6:30pm on RTÉ One!