From Jarvis Cocker storming the stage, to Robbie Williams challenging Liam Gallagher to a fight, the Brits has had its fair share of outrageous moments.

The same could be said for its fashion. The ceremony has long been an occasion for experimental looks, some of which have gone down in pop culture history.

While 2021’s Brit Awards (May 11) will see the likes of Dua Lipa, Coldplay and The Weeknd taking to the stage, we’re taking a nostalgic trip down memory lane to revisit some of the most jaw-dropping looks from its red carpet…

Lady Gaga picked up three gongs at the 2010 Brits, but it was her lace bodysuit by Alex Noble, teamed with a Philip Treacy mask, that really stole the show.

Geri Halliwell sent the media into a frenzy in 1997 when she performed with the Spice Girls in this Union Jack dress. In recent years, the pop star has revealed the outfit was made by sewing a souvenir tea towel onto a plain black dress.

Not everyone gets it right and Clean Bandit received backlash on Twitter in 2014 when singer Grace Chatto carried a handbag containing live fish, which many viewers pointed out was cruel. She explained to Capital FM that the accessory was holding her two pet fish, named Dolce and Gabbana.

We always look forward to seeing what Olly Alexander will wear on the red carpet and the 2019 Brits look didn’t disappoint. The Years and Years front man sent us swooning in his feathered Palomo Spain cape.

Who could forget Kylie Minogue’s white corset dress and thigh-high boots combo at the 2002 Brits? The princess of pop wore the look to perform her hit single Can’t Get You Out Of My Head.

Pop group Steps were well known for picking a theme and dressing in slight variations of it. Back in the year 2000, they all wore different red and black outfits, which included a jewelled bikini top, a snakeskin jacket and a pair of tinted sunglasses.

A year after Geri Halliwell did it, Annie Lennox made a tongue-in-cheek nod to the century-defining fashion moment by wearing a Union Jack suit.

Billie Piper was a popstar before she moved into acting, and she took a style risk when she wore this Seventies disco jumpsuit and platforms to the 1999 awards show.

Lizzo proved she was the queen of the red carpet when she donned a strapless chocolate bar-inspired Moschino gown to the Brit Awards 2020.

US singer Ashnikko’s giant blue ponytails were so long they had to be escorted onto the red carpet by two masked men at the 2020 Brits. Easily one of the most memorable looks of the night, she accessorised the futuristic red carpet moment with a silver pore strip across her nose. 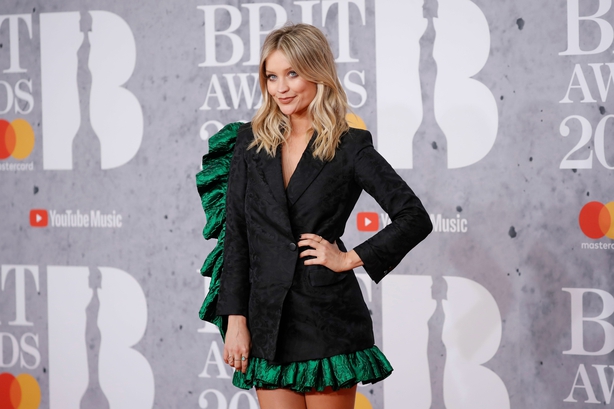 Laura Whitmore dared to be different at 2019 Brit Awards when she wore a a dress from Emilio de la Morena, a London based fashion brand that designs and manufactures luxury womenswear. The oversized black blazer brought a shock of colour to the red carpet with an emerald green ruffle at the hem and along the right sleeve.