Most of us could use a little more glamorous in our lives at the best of times, but particularly right now. With no parties to look forward to and our days spent in leggings and pyjamas, we've been counting down the days until the Venice Film Festival red carpet.

And the spectacular event didn't disappoint.

The Venice Film Festival – one of the most glamorous events in the celebrity calendar – kicked off in 2020 style, with stars walking the red carpet, dazzling in couture and attending photo calls with the season's hottest accessory: face masks. 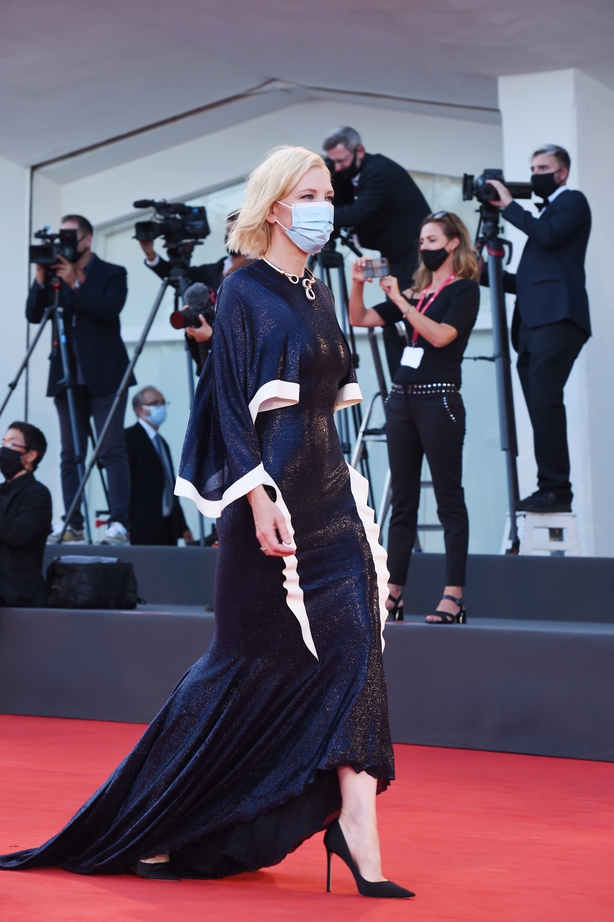 The world's longest running film festival is running from 2 and 12 September.

As the first in-person international film event in months, it was always going to look a little different. Still, the stars pulled out their best looks for the occasion. Here are some of our favourite looks from the cinematic extravaganza…

The masks
A red carpet in the age of Covid-19 was always going to look a little different, with attendees required to wear protective face masks when on the festival grounds or in screenings. The stars still managed to work them into their looks, with some even making it the focal point of their outfits. 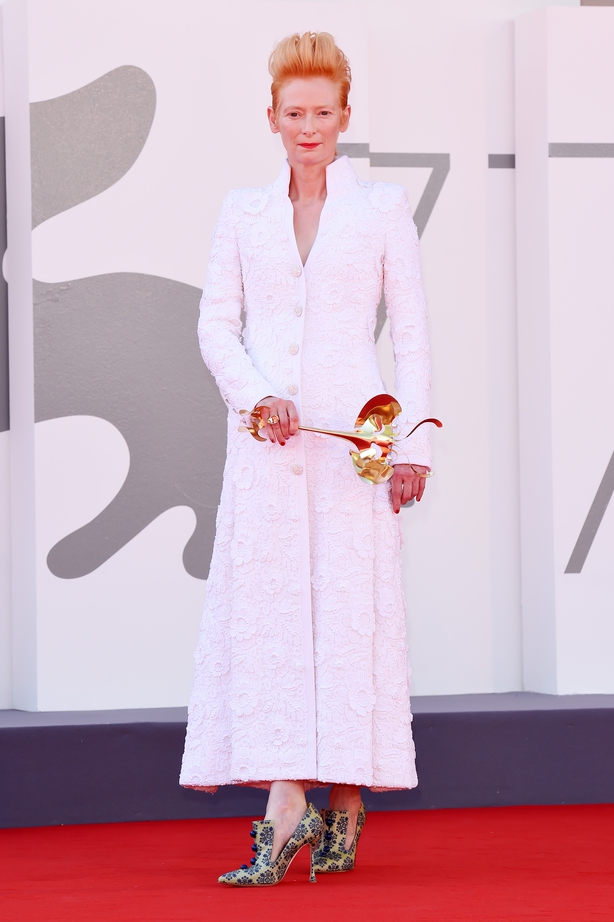 Leave it to Tilda Swinton to interpret the face mask as a beguiling fashion accessory. The actress was honoured on the opening night of the festival with the Lifetime Achievement Award, and walked the red carpet in a striking dress by Chanel, featuring a ruffled white top and figure-hugging black skirt. She paired it with a shimmering gold face mask, accented with pearls, designed by James Merry.

At the premier for The Human Voice, Swinton once again brought out her mask, this time with a white lace Chanel Couture coat-dress and intricate brocade mule-style heels. 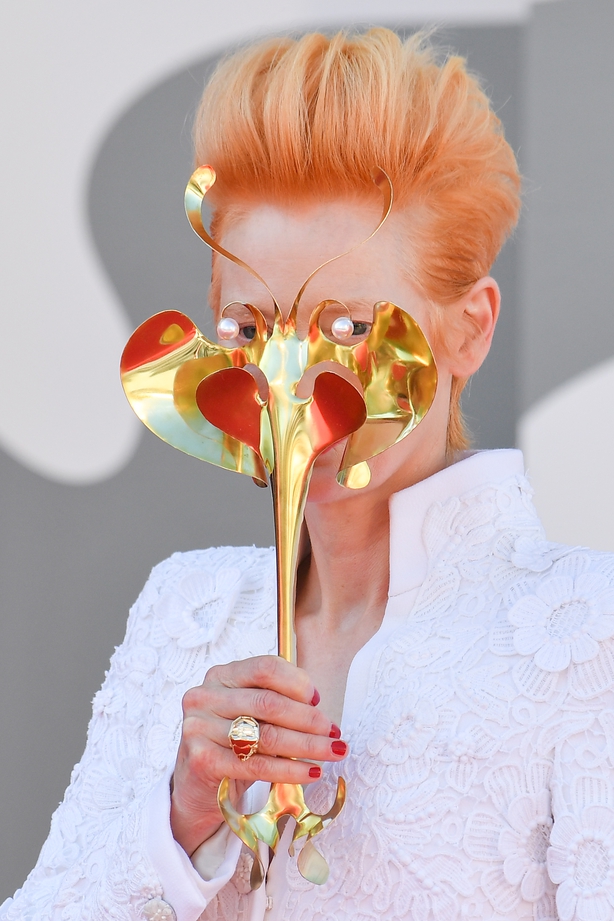 Others went down the more traditional route, matching their mask with their outfit like model Arizona Muse. The statuesque beauty walked the red carpet in a ruffled scarlet gown featuring a plunging neckline and cinched waist.

The red gown – by Alberta Ferretti – was green in that it was made sustainably from organic silk, and was matched perfectly to her simple deep red face mask. 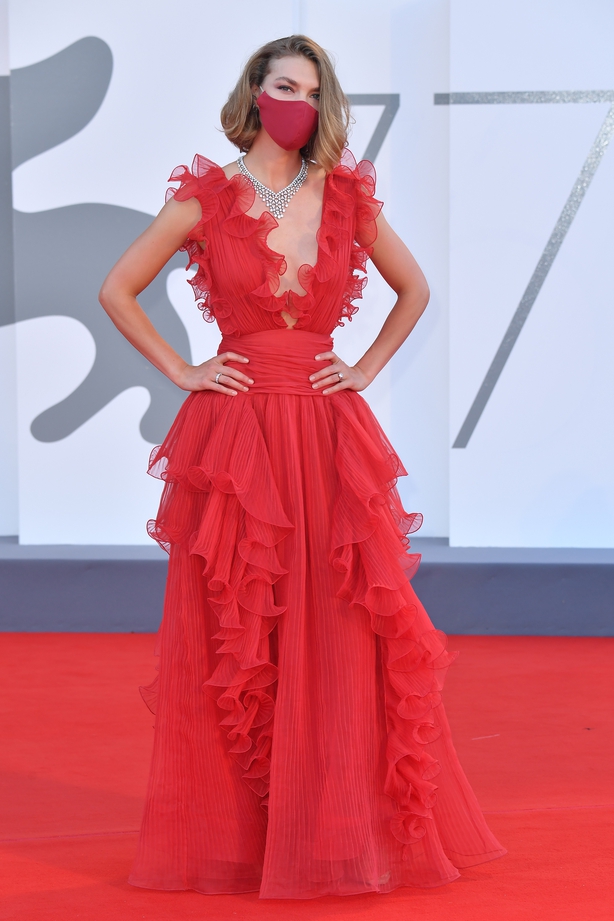 Others went for function over fashion, such as Jury President Cate Blanchett, who walked the red carpet on the opening night of the festival in a simple blue and white protective face mask, briefly removing it for some photos.

The glamour
If her face mask was understated, Blanchett's gown was anything but.

The star walked the red carpet in a breathtaking navy sequinned gown by Esteban Cortazar. The stunning gown featured dramatic cape-inspired sleeves that flowed behind her, a trailing flared hem and bold white ruffled trimming that hugged her figure.

The deep and rich navy of her gown contrasted perfectly with her platinum blonde hair, this time-worn cropped to the shoulders and lightly waved. Her makeup was simple and understated, with a flick of striking black eyeliner, a nude lip and glowy, peachy skin.

At another event the actress repurposed an Alexander McQueen gown she'd previously worn at the 2016 BAFTAs, turning it into a striking embroidered floral top and pairing it with sleek black trousers. 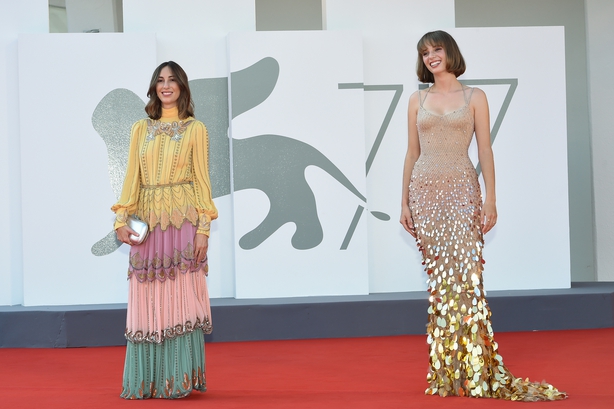 Maya Hawke, daughter of Ethan and Uma Thurman, looked like pure Hollywood royalty walking the red carpet for the Mainstream premiere. in a shimmering Versace gown. The breathtaking gown featured a fitted nude bodice overlayed with beading and a shimmering gold fishtail skirt.

The daywear
Almost as exciting as the opulent evening wear was the adventurous daywear of many of the stars. European film festivals are often far looser when it comes to fashion, so stars frequently pull out their most daring and individual looks. 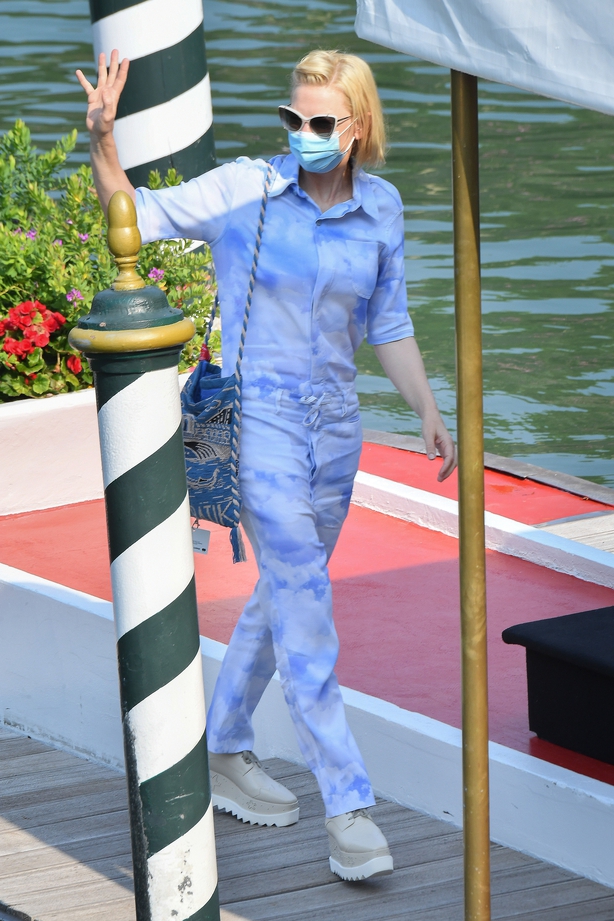 Later that week, she pulled out another standout outfit: a nude casual trouser suit featuring a striking red palm print, by Giorgio Armani. Paired once again with her leather trainers, she looked cool and stylish.

Tilda Swinton also pulled out the stops with her off-duty look, donning a daring chartreuse blazer over a casual t-shirt and pale coloured loose trousers – the perfect summation of her bold take on androgynous fashion.

Click through our gallery at the top of the page to see more from the Venice Film Festival.