Red carpet events have been few and far between this year, but this could be about to change as Venice International Film Festival kicks off.

Organisers say it’s the first major event of its kind since so many were shut down by the pandemic. The festival will be as star-studded as we’re used to, with Cate Blanchett presiding over the jury, Tilda Swinton set to receive a lifetime achievement award, and actors like Helen Mirren and Shia LaBeouf premiering films at the event.

There will, of course, be changes to the festival this year. Guests will have their temperatures checked, people will be expected to wear masks, and organisers have added two outdoor screens to show films.

Even if social distancing rules are in place, we’re still hopefully going to get some major red carpet moments. Venice Film Festival has a reputation for pulling out all the stops in the fashion stakes. These are just some of the most memorable outfits from its history…

For the premiere of Frida – the biopic in which Salma Hayek plays Mexican artist Frida Kahlo – Hayek wore an LBD, but it wasn’t your classic black dress. Instead, she turned heads in a see-through lace number with long sleeves and not much underneath.

Showing pregnancy dressing doesn’t have to be boring, in 2003 Kate Hudson wore a silver beaded two-piece from Chanel. The intricate outfit featured a crop top showing off her stomach, and a knee-length skirt with sheer overlay. It was slinky and a whole lot sexier a look than we were used to seeing pregnant women wear on the red carpet.

At first glance, Nicole Kidman’s Gucci dress looks classic and simple – but it’s far from that. Upon closer inspection, you can see the level of detail on the silver strapless dress; a shimmery rose pattern and feather-like detailing along the bottom. And it gave the actor an opportunity to wear that gorgeous diamond necklace.

You don’t often see celebrities having an awful lot of fun on the red carpet, but Helen Mirren is an exception. She bucked the trend for full-length gowns in 2006, opting to wear this ankle-grazing cobalt blue dress instead – which she showed off by twirling.

From one angle, Anne Hathaway’s dove grey dress looks pretty classic: strapless, and with plenty of ruffles around the skirt. However, when she turned, you could see how unusual the outfit is, as the dress is raised on one side. We’re used to mullet dresses – where the skirt is short at the front and long at the back – but this was a new interpretation of the style.

As the face of Dior, Jennifer Lawrence often wears gowns from the French fashion house – but this is one of our favourites. For the premiere of Mother!, Lawrence went full princess in a ballerina-style gown with a nude bodice and black tulle overlay.

Tilda Swinton can always be relied upon for knock-out looks, made even more impressive when you learn she mainly styles herself. In 2018 Swinton was promoting Suspiria, and did so wearing plenty of Haider Ackermann – a designer who often makes special, androgynous outfits for the actor.

The severe ruffles of the high neckline were offset by a feminine, flowing midi-skirt, but what we like best about this outfit is how it reminds us of a mustard dress Swinton wore to the festival back in 2008.

Lady Gaga had plenty of huge fashion moments during the 2018 press tour for A Star Is Born, but few were as memorable as her turn on the Venice red carpet.

Wearing a pink feathered gown from Valentino, Gaga showed us how OTT dresses could still feel classic and elegant.

In recent years, Valentino has proved the go-to fashion house if you want to make a statement at Venice Film Festival. Last year supermodel Iman stole the show in a kaftan-style dress with bird pattern and plenty of feathers. 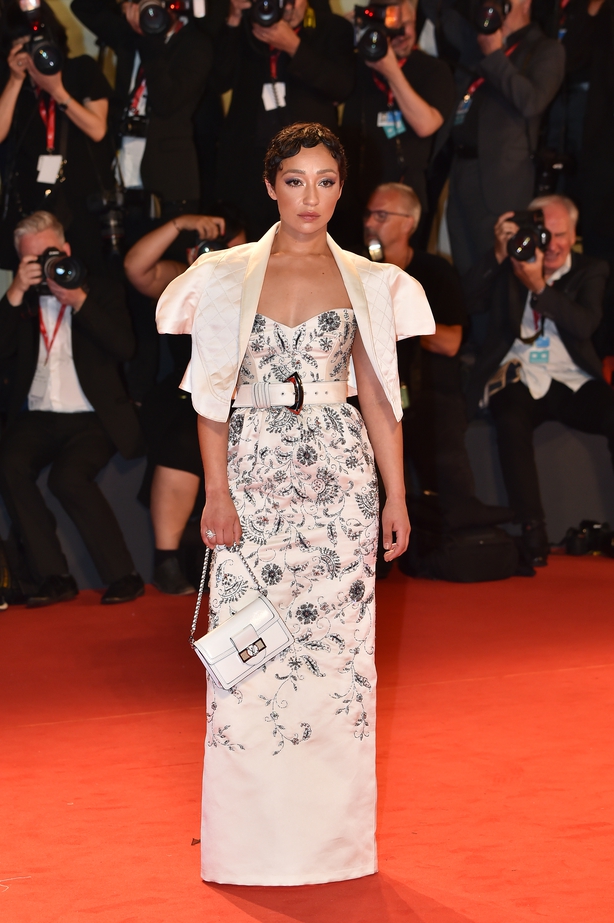 Our own Ruth Negga made an appearance on the red carpet in 2019, dazzling onlookers in a feminine Louis Vuitton look, wearing an embroidered white dress, nipped at the waist by a wide white belt and finished with a white bolero.