Season three of The Crown hasn’t even started yet but, honestly, we’re already getting excited about the prospect of season four.

Why? Because Netflix has just announced it has cast the actor who will play Princess Diana.

Emma Corrin will join Olivia Colman, who takes over from Claire Foy to play Queen Elizabeth in the next season, airing later this year.

"I have been glued to the show and to think I’m now joining this incredibly talented acting family is surreal," Corrin said in an Instagram post.

"Princess Diana was an icon and her effect on the world remains profound and inspiring.

"To explore her through Peter Morgan’s writing is the most exceptional opportunity and I will strive to do her justice!"

Given that the first two seasons were full of incredible costumes – from Queen Elizabeth’s coronation and wedding gowns, to Princess Margaret’s stunning 1950s and 1960s dresses – we can expect Diana’s wardrobe to get The Crown treatment, too.

And what a wardrobe they’ve got to choose from. Here are five of Princess Diana’s most famous fashion moments that we hope to see on screen…

For the announcement of her engagement to Prince Charles in 1981, then 19-year-old Lady Diana Spencer chose a typical early 80s ensemble of a blue belted cropped jacket, matching long skirt, a white pussy-bow blouse and a black clutch bag.

The outfit matched the huge sapphire in her engagement ring, and the choice of royal blue was fitting for the occasion.

The veil was topped with diamond bandeau tiara that’s said to have been in the Spencer family for nearly a century.

The 80s were all about power dressing, and Diana had an endless supply of bright block-colour skirt suits with major shoulders, that she wore for royal appearances.

This pillar-box red example with military style buttons was chosen for a visit to the Royal Ballet School in 1987.

Catherine Walker was one of the Princess’s favourite designers, creating a variety of gowns for her for formal events.

Diana nicknamed this spangly white beaded number the ‘Elvis dress’ because of the big stiff collar. And clearly she liked it, because she wore it twice in the late-80s.

We simply can’t ignore this stunning strapless dress by Christina Stambolian, which Diana wore to a Serpentine Gallery benefit event in 1994.

The little black dress was reportedly chosen to divert attention from a documentary about Prince Charles’ infidelity – and evidently it worked, because Diana was splashed all over the front pages the next day. 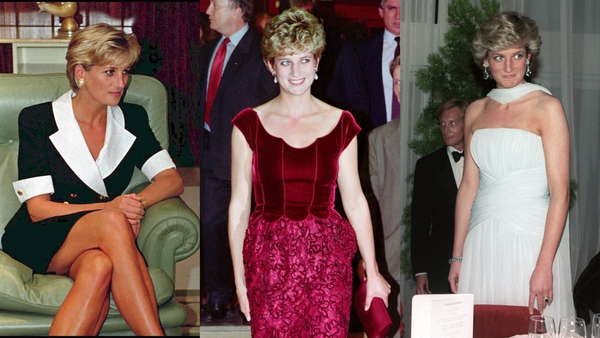