She might be in her third trimester, but the Duchess of Sussex isn’t letting her bump get in the way of rocking some super glamorous looks.

The former Suits actress looked absolutely radiant in a knee-length gold brocade dress as she attended a reception to celebrate the 50th anniversary of the investiture of the Prince of Wales at Buckingham Palace.

Meghan, who never looks anything less than perfectly put together, paired the shift dress with a chic €1,020 cream coat from Amanda Wakeley and a classic pair of suede pumps by Paul Andrew.

True to her signature style, she completed the look by tying her hair into a sleek chignon.

A long-time fan of Wakeley, this isn’t the first time that the royal has styled up an outfit with the British designer’s best-selling ‘Crombie’ coat.

Meghan was photographed sporting the same outerwear back in March 2018, and then again at an event at the Natural History Museum last month, so we reckon we’re going to see a lot more of the coat in the months to come.

Meghan made a joint appearance with the Duchess of Cambridge, who looked immaculate in a mint balloon sleeve dress with a pair of cream heels.

Ever the glamorous mum, Kate carried a small silver clutch and wore her hair in her trademark loose curls.

The Duke of Cambridge, the Duchess of Cornwall and Theresa May were among the other high profile guests at the event, which honoured the 50 years that Charles has dedicated to Wales, the UK,  and the Commonwealth. 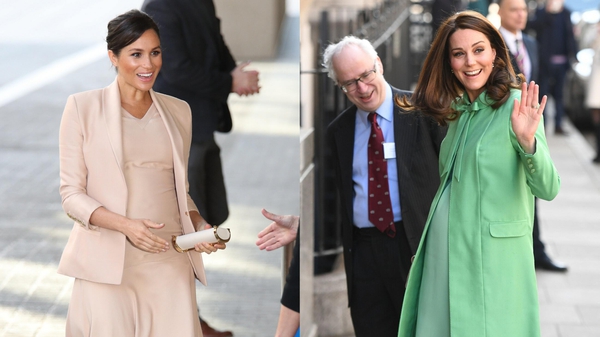 The difference between Meghan and Kate's maternity styles