Rose McGowan has something of a reputation for being hard and angry. This is what made chatting to her so surprising – she might be angry about some things, but there’s also a lightness about her which is rarely represented in the media.

You might know her as Paige from the TV series Charmed, or perhaps more for her involvement in the #MeToo movement. She was one of the first women to speak out against Harvey Weinstein, although he denies all allegations of sexual assault.

WE’RE A THIRD FUNDED!! THANK YOU!! Now 14 days left to reach the target on @kickstarter so I can make #THECALLCENTRE my debut film as a writer/director/producer! Every little helps please pledge, share & spread the word: https://t.co/NB4UTFOlzS @thimblefilms #womeninfilm #RT 🎬 pic.twitter.com/3K4TsRQv13

After years of frenzied media attention, McGowan has released a memoir called Brave, and seems to have found a new equilibrium in life. She’s now supporting female filmmakers, and is the executive producer of The Call Centre – Louise Connolly-Burnham’s debut short film, currently raising money for production on Kickstarter.

Here, McGowan tells us a bit about everything from taking control of her image to the hope she feels for the future…

The importance of supporting female filmmakers
The Call Centre – about an introverted young woman called Paige, bored in her day job and longing for intimacy and connection – is a female-led film with a lot of women involved behind the scenes too, and this was particularly important for both McGowan and Connolly-Burnham.

"I directed and produced a short film, and I didn’t really have anybody helping me that came on as an exec producer," McGowan says. "So I thought I could lend my name and some extra cheerleading, because I believe in the power of women filmmakers."

With McGowan’s troubled experiences in Hollywood, she wants to empower other women. Her advice? "Know your worth. Even if you don’t think you’re worthy of a seat at the table, you definitely are," she says. "If there isn’t a table you can invent a new one – Hollywood was built on illusion."

She also wants to tackle the myth of the ‘tortured artist’, saying: "Know that times have changed – just because you want to create art doesn’t mean you have to suffer."

How #MeToo has changed things
Even though McGowan has detached herself from the Hollywood machine, she’s still tentatively hopeful about the state of things for women. "I don’t really work within Hollywood any more," she says. "But from what I’ve heard, women writers are being heard in writers rooms, they now have intimacy advisers on set and I think overall there’s a lot more awareness."

Nowadays, McGowan is more interested in what it’s like for women as a whole – and this really does fill her with hope. "I go all over the world and give talks, and I talk to both women and men," she says. "And I definitely know there’s been a real change."

It might seem like McGowan’s name will be permanently associated with Weinstein and the #MeToo movement, but she’s looking beyond this. "My book, Brave, is about changing the social structure of what we think has to be a certain way, when it actually doesn’t," she says. "That’s more where my interests lie, rather than binary sexual harassment."

The importance of reading
McGowan seems surprisingly level-headed about the state of the world – just as long as she can indulge in her two main forms of self-care: baths and reading.

"I read in the bathtub, that’s pretty much all that goes on," she says, laughing. "Reading is probably my best form of therapy. Getting into other lives and other voices – that’s the way to stay sane and show it’s not all about you. I take my inspiration from a lot of places, I’ve been on a World War II kick lately which is probably not what you expected to hear!"

McGowan also confesses to a love of history books. "There’s definitely something to learn from a lot of the freedom fighters that came before us," she says. "I reread the autobiography of Malcolm X – it’s beyond enervating and energising. I’m sure he wouldn’t have liked me, but I very much like him."

She adds: "I relate to being branded as angry when you have a right to your anger. The media likes to paint you in one way, with a lack of nuance. When you get angry about righteous injustice, that’s righteous anger and should be allowed."

McGowan describes her general portrayal as "wearying", saying, "It’s like a way of making me scary to the world, so people don’t listen."

On taking control of her own image
Even though she’s not always thrilled about how she’s represented, escaping Hollywood has given McGowan the opportunity to take control of her appearance.

"I’m just a punk, I’ve always been a punk!" she says. "I’ve been a long time in Hollywood where acting and being famous was my day job, so I had to wear stupid evening gowns because that’s what I was expected to wear. Now I’m done with acting and I can just look like me, I basically look the same as I did when I was 12… except a whole lot older unfortunately."

She’s now instantly recognisable for her closely cropped hair, and this is a conscious decision. McGowan says this was all about "letting go of societal expectations and letting go of the idea that you’re supposed to be hot, when in fact I think it’s better to be cool."

The traps of social media
The Call Centre is in part about the lack of intimacy in modern life, and our desperation to get some kind of connection with others. Connolly-Burnham says: "You can look at someone’s Twitter or Instagram and think you’re up to date with their life, when you actually have no idea what’s going on. With social media at the moment we’re lacking real life connection."

Today I’m thinking of this world and its beauty. Hang on for one more second, one more hour, we will make it. Sending all the light I have left to those in war torn countries, to political prisoners, to the traumatized, to those of us just trying to survive.

To overcome this, McGowan says she has a simple trick when tweeting. "I always imagine there’s only one person on the other end of the tweet I’m sending, and then I forget I’ve just invited the world to have an opinion on what I wrote," she says.

"Twitter’s hard, but it has its benefits and negatives – it gives you a voice when you couldn’t have had a voice."

At the end of the day, McGowan is far more preoccupied with making a difference. "Honestly I don’t even care," she laughs. "I care about my voice being out there, I don’t care about a picture."

The Call Centre is Louisa Connolly-Burnham’s debut film as writer, director and producer, with Rose McGowan as executive producer. 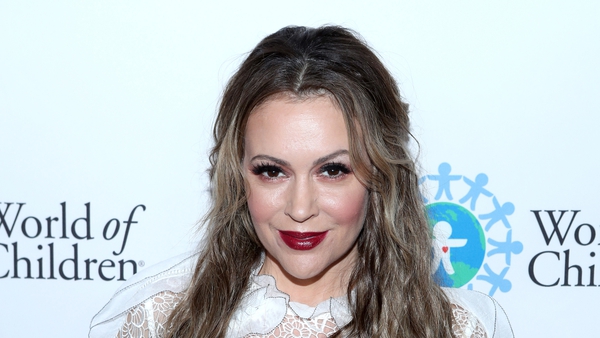