Still the most popular short break destination for Irish people, London has it all – vibrant culture, iconic sights, food and history and it’s only an hour away. As any London dweller will be all too keen to tell you, the only downside to London’s greatness is how expensive everything is (on average rent costs £1,500 a month – ouch!). The good news is that most attractions are free and there are many ways to cut the cost without missing out on any of London’s famous buzz.

Getting Around
Before you go, buy a Visitor Oyster Card, a smartcard that’ll cover you for journeys on bus, Tube, tram, DLR, London Overground, TfL Rail and most National Rail (tfl.gov.uk). The card costs just £3 and you can top it up as you go so it works out much cheaper than buying single tickets each time. Topping up by £15 should cover you for two days in London. There’s no official London transport app but the free, London-centric Citymapper app (Citymapper.com) shows live departures across Tube and Overground, bus and cycle hire and even suggests walking routes. Essential.

On Your Bike
Instead of the underwhelming Big Sightseeing Bus, pick up a ‘Boris bike’ at a docking station for just £2 for 24 hours and start exploring at your own pace (tfl.gov.uk/Cycling). For a guided cycle, the Sights of London tour with Cycle Tours of London (biketoursoflondon.com) will set you back £20 but you can tick Trafalgar Square, Buckingham Palace and Covent Garden off your sightseeing list. 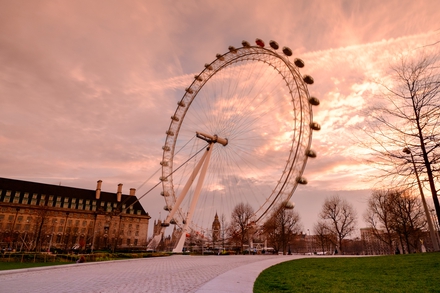 Attracting 3.5 million thirsty-for-a-view tourists each year, it’s no surprise that the queue for a 30-minute ride on The London Eye (londoneye.com) is usually lengthy (you can expect to queue for around 20-30 minutes). Speed things up by booking online so you can head straight to the boarding queue. Another way to skip the line is to go at night – less queues, plus London is pretty wonderful at night. Fast track London Eye tickets cost £136.62 for a family or £37.95 per person for adults. The Day & Night experience is £24.53 per person and children under four fly for free when booked online. For an even better view, Hampstead Heath is unbeatable. And it’s free! 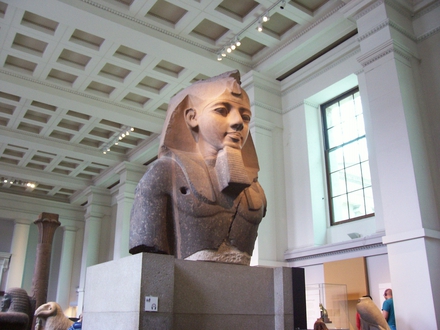 The British Museum
You don’t need to be Tony Robinson to love the history-fest that is the British Museum (britishmuseum.org). Home to Cleopatra’s tomb, the Rosetta Stone and all sorts of artefacts mostly plucked from the golden days of the British Empire, this mammoth museum is free and you can easily devote a whole day to it, so plan wisely. Pick up activity packs in the Great Court as you enter as a great way to get kids engaged with history.

Famous faces from Shakespeare and Lord Byron to Kate Moss and Kate Middleton are side-by-side in the National Portrait Gallery (npg.org.uk). Admission is free and the current Audrey Hepburn exhibition is a must for cinema and style watchers.

The V&A’s ‘Savage Beauty’ Alexander McQueen exhibition really set the bar high for museum retrospectives and, even though it’s now finished, the free V&A (vam.ac.uk) is a firm favourite of artsy types. Around the corner, the Museum of Natural History (nhm.ac.uk) has something for adults and youngsters alike – from dinosaur fossils to investigating crime scenes. It’s free but some exhibits, such as the David Attenborough First Life Virtual Reality, cost £6.50 to enter.

A great place to visit with kids, believe it or not, is the National Gallery (nationalgallery.org.uk) which offers a free special tour of five famous paintings for children and free hands-on art workshops and drawing sessions every Sunday.

A power station-turned-church to modern art, the Tate Modern (tate.org.uk) divides opinion. If you like your art cutting edge, you’ll love it, but if surrealism and Damien Hirst leave you cold, this won’t be your cup of tea. Speaking of tea, the Tate Café was voted the best family restaurant in London by Time Out because of its family-friendly vibe and, best of all, kids eat for free. Its breakfast menu ranges from a £3.50 smoothie to a sausage ciabatta for £4.95 and it’s got some pretty sweet views over the Thames, too.

A lesser-spotted museum that children in particular love is the London Transport Museum (ltmuseum.co.uk). A highly interactive museum, there’s video screens, maps, and models to keep young ones entertained and even an under-fives play area. Admission is £13.50 for adults but under 16s are free.

Skip…
Madame Tussaud’s – it’s overrated, the queues are usually unbearable, and the £33 admission for an adult will come in handy when you’re eating out instead. Likewise, the £46 for a family ticket to Buckingham Palace really isn’t worth it unless you’re a committed royal watcher. 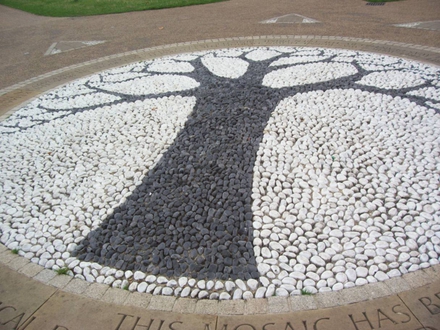 A mosaic in Hyde Park

London’s parks are an excellent stomping ground for everyone from boisterous kids to courtin’ couples. Hyde Park is an obvious choice but there’s also Regent’s Park, St James’s (with glimpses of Buckingham Palace and Big Ben) and deer watching in Richmond. If you’re headed for Hyde Park and the sun is out, order a picnic hamper from The Arch (thearchlondon.com) in Marble Arch. Not your standard picnic fare –there’s smoked salmon sandwiches, homemade crisps, fresh macarons and a bottle of fizz for £45. Book in advance by calling 020 7724 4700. 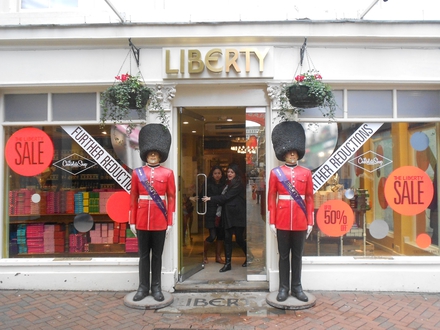 Liberty
Unless you’re into overpriced branded knick-knacks, avoid Harrod’s and explore Liberty (above) instead. Less of a tourist attraction and more fashion-forward, this London stalwart famed for its fabrics is well worth a wander, even if you leave empty-handed. Outside, the thirteen streets of Carnaby offer a more unique shopping experience, such as the only Paul Smith shop where you can customise your jeans and shops like Monki, Brandy Melville and Lazy Oaf which haven’t hit Irish shores yet. In the biz since 1799, famed tailor shop Peckham Rye (peckhamrye.com) is as much of a mini-museum as it is a haven for dapper gents. 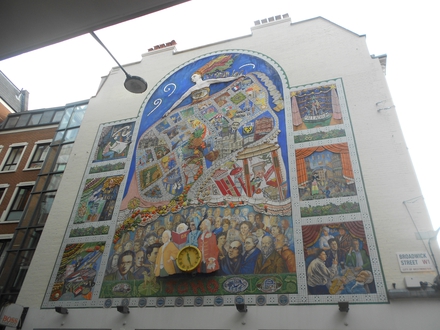 A wall mural in Carnaby

Stay
For young couples, The Hoxton (thehoxton.com) in Shoreditch continues to define hipster haunts. One of its quirks is providing breakfast in a brown paper bag and rooms are around €233 a night. It’s a similar vibe at the Ace Hotel (acehotel.com/London). Rooms are around €213 a night and you can look forward to a record-player in your room, a fun photo booth in the lobby and a chilled rooftop bar. Close to the West End, the Sanctum Soho (sanctumsoho.com) has a hot tub on the roof and a music theme running throughout, including an Instagram-worthy Jimi Hendrix stained glass window in the lobby. For €300 a night and small-ish rooms, you’re paying for the location and cool factor.

On the budget end of the scale, Tune Hotels (tunehotels.com) are dotted around the city in handy locations including Canary Wharf, Westminster and Paddington. A strictly no-frills affair, but for just £70 a night, these basic rooms do the job.

While Kensington is still a posh part of town, the four star Nadler Hotel (thenadler.com/Kensington) is reasonably priced, with rooms from €152 a night. The large rooms come with a kitchenette so it’s ideal for families. It’s also 5 minutes from Earl's Court tube station and a direct line to Heathrow.

AirBnB (AirBnb.com) always has great options for visiting London on a budget. Rates vary but couples can rent a studio in Hackney from €71 a night or €297 can get you a 2-bed flat, spacious enough for a family, in hip Holborn.

For a home-from-home experience that’s not actually someone’s home, StayBridge Suites (staybridge.com/London) is right beside Westfield shopping centre and overlooks Olympic Park. Nightly rates start from £195 for a larger than usual hotel room suite, complete with a fully equipped kitchen. 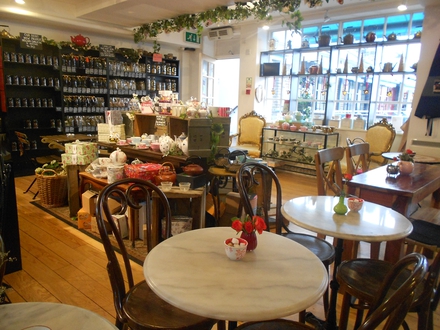 Kingly Court (carnaby.co.uk/food-and-drink/kingly-court) off Regent’s Street has slowly evolved into a food and drink hub. Upstairs, The Rum Kitchen serves an authentic Caribbean flavour punch with strong cocktails on the side. There’s also the quaint Camellia’s Tea Room for afternoon tea and, on the ground floor, the shabby-chic Whyte & Brown (whyteandbrown.com) is an excellent spot for brunch (try the avocado on sourdough toast for £6.50) and the menu is all about the chicken. Everything in Kingly Court is under one roof so it’s pretty handy if you’ve got kids in tow.

Taking chocolate to another level is Choccywoccydoodah (choccywoccydoodah.com), where the sweet treat is carved into all sorts of incredible, edible creations including owls and Alice in Wonderland-inspired designs. Adults will drool and kids won’t be able to keep their hands to themselves. Take home a gift box for £19.99 for instant brownie points. 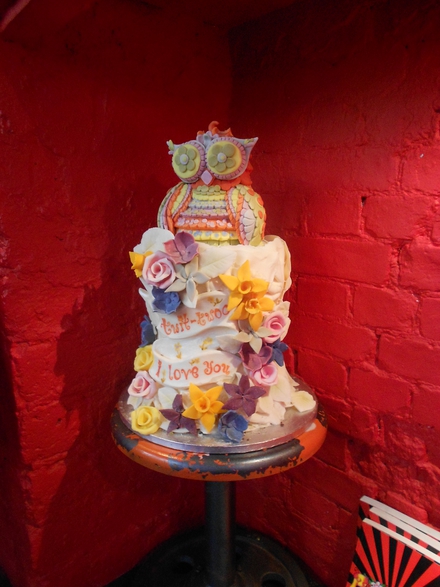 Aer Lingus (aerlingus.com) fly 13 times daily to Heathrow and also fly 6 times daily to Gatwick. Fares start from €19.99 one way. Thanks to their partnership with BA, Aer Lingus also fly to London City Airport, the easiest and most centrally located airport in the city.

Ryanair (Ryanair.com) fly 8 times a day to Stansted, 5 times to Gatwick and – slightly further afield – three times a day to Luton. Fares start from €14.99 one way.

Cityjet: A favourite with business travellers (so you can usually expect business fares too if you book last-minute) Cityjet fly up to 6 times daily from Dublin to London City Airport. Fares from €35 one way at Cityjet.com.