Wedged in the middle of Europe, Switzerland has long been regarded as a highlight of the continent. Perfectly located between west and east, it enjoys the situation of being balanced between cultures, which makes it a cultural melting pot of a travel destination.

There can be no doubt that the Land of Milk and Honey hangs its hat on being Europe’s No. 1 winter destination, with skiiing, snowboarding, après-ski, and wooden lodges the calling card of the country.

But outside of that period, in the spring and summer, and even into early autumn, the country offers a totally different experience.

When the snow has melted away, the radiant, lush beauty of the country is revealed, as the Alps glisten with green grass, and the mountain ranges become ripe for hiking and cycling.

My trip to the country came in the height of summer to experience this ‘off-season’ aspect to the country, and as soon as I landed at Zurich International Airport, I felt that bucolic influence immediately: sounds of yodelling, cow bells tinkling, sheep bleating and pigs squealing are played on speakers on the train that leads one from the terminal to the train station. Immediately it places you in the rural areas of the country that so many visitors to the nation have top of their hit list. 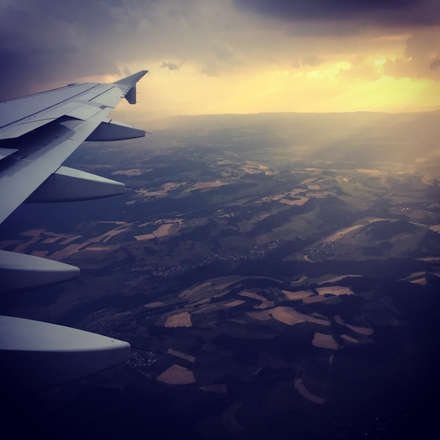 The fields outside Zurich as seen from the air

Two trains across the country brought me from north-east to south-west and the gateway to the Alps that is Nendaz. It’s far easier to fly into Geneva, but due to long queues in Dublin Airport, I cut it too fine and missed my flight. The experience of having to cross the country to get to the Alps lent me the opportunity to pass through the entire country and get a feel for it before my final destination. Wooden chalets, lakes, picture perfect little towns and vineyards chiselled into slopes. It’s a gorgeous and stunning location.

Arriving on a Friday night, after a late-night taxi, I was installed at Le Mont-Rouge, a hotel with cabins at the rear, as well as tennis courts, located right in the heart of Nendaz town. The restaurant adjoining the hotel is superb and caters for the guests’ breakfast as well as offering haute cuisine and bistro fare for dinner. 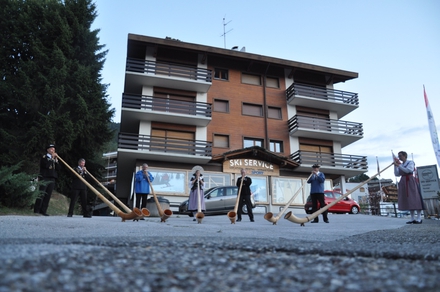 An impromptu alphorn performance in the streets of Nendaz

My trip coincided with the Alphorn Festival in the town, where the the blowing of the famous horn becomes the centrepiece of the region. 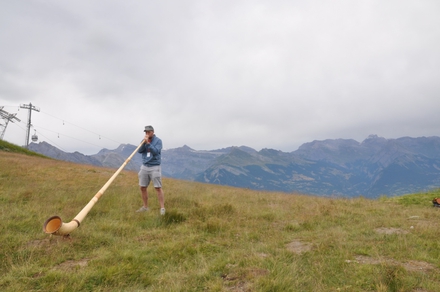 Tadhg Peavoy gets to grips with the alphorn

The festival incorporates a tent in the town itself where alphorn concerts take place each evening, as well as impromptu alphorn performances on the street, and more blowing of the horn at an outdoor festival area atop the nearest mountain. To get to the latter, one needs to jump on one of the ski gondolas that lift you up into the Alps, with the town diminishing in sight behind you and the mountains looming nearer as you ascend. 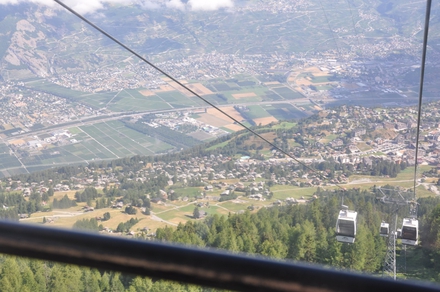 A view from a gondola approaching the top of Prarion Valley.

Hiking and dining in the Alps

The gondolas bring one up to one of the four valleys surrounding the town – Les 4 Vallées – from which you can pick your winding route back down to Nendaz.

I spent the majority of my weekend walking the Prarion Valley, with local guide Jean-Noel, arranged by the town’s tourist board. 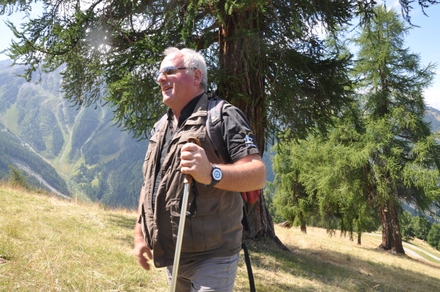 The local guides know the paths intimately and impart their knowledge of the local history and nature as one ambles along. This includes information on the pine trees, larch trees (which are the largest in Europe), ant hills and other flora and fauna along the way. 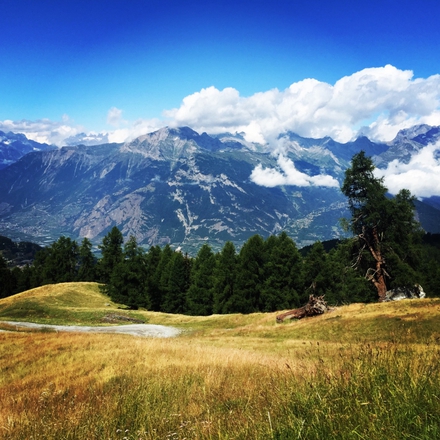 Jean-Noel also talked about the black fighting cows we passed, which cost €3k for a normal cow and up to €45k for a queen. We were given a full lowdown on the animals, which compete in the spring in regional, national and international fighting competitions against Italy, Austria and France. Call them the ultimate fighting cows of Nendaz if you will – Switzerland’s answer to Conor McGregor. 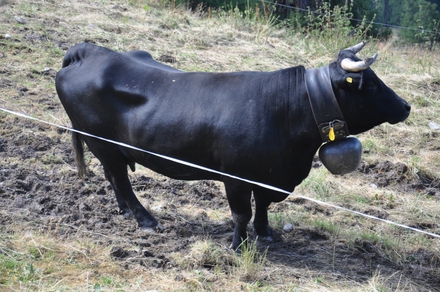 One of the black fighting bulls of Nendaz

As well as hiking the trails, the other great attraction in the region is the food. The Swiss have a very specific cuisine with fresh cheese and wine at the heart of it and the gastronomy in the region is a delight.

We stopped at the Cabane de Balavaux for a glass of petite arvine white wine, served with a soft goat’s cheese called serac, with olive oil, chives and ground peppercorns. This fantastic snack was served as a precursor to a cheese fondue for lunch at another superb restaurant,  a little further down the valley, called Chalet les Alpes; it was all washed down with grand cru armine white wine – another superb regional variety. 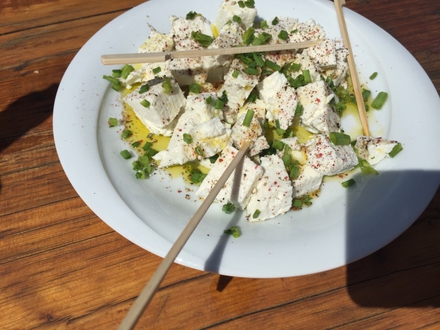 With that hearty feast inside us we continued down the valley following the route of the bisses, which are run-offs for melting snow in winter, but in the off-season make excellent trails. The bisses running through Prarion is 34km and was built in the 9th century. The route also took in the battlefield at Praddadzau where Nendaz fought – and lost against – the neighbouring town for control of the pastures, before bringing us back down to Nendaz proper. 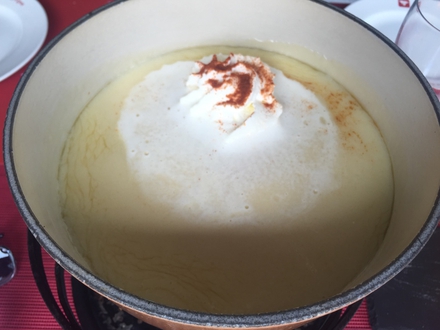 Back in Nendaz, after a day of fresh air and exercise on the slopes, the town is all about rest and relaxation. And there are two places that jump out as the place to do this. Firstly, the restaurant adjoining Le Mont-Rouge hotel is quite superb, with regional dishes inspired by a chef that spent time in Ireland in his younger days.

While across town, the Hotel Nendaz 4 Vallées offers excellent fish and white wine pairings, served on a balcony overlooking the main square of the town if the weather is fine enough. The hotel also has a spa and wellness centre, the perfect place to unwind after a hike, and before a lavish Swiss dinner.

Beautiful landscapes, wine varieties rarely available in Ireland and food to die for. What’s not to like? 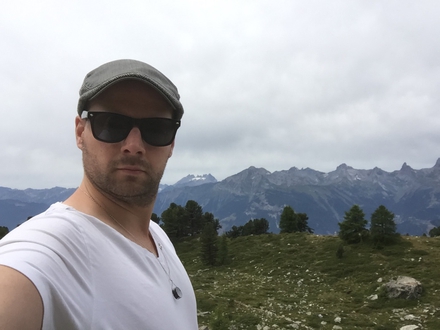 Getting there: Aer Lingus fly direct from Dublin to Geneva and Zurich. From there a train brings you to Sion, before getting a bus to Nendaz. A Friday morning flight will have you in Nendaz by midday.

Accomodation: There are many different accommodation options in Nendaz. Tadhg stayed at Le Mont-
Rouge, which has different options ranging from €65 to €150 per night.

Airbnb lists hundreds of options in the area. Prices start as low as €59 per person.

Eating out: Like accommodation, food prices in Nendaz vary greatly. A meal in the highly regarded Le Mont-Rouge will set you back around €100 per person including wine.

At the other end of the scale, a pizza at Chin Chin pizzeria will cost you €20.

If you take a self-catering option there is an excellent supermarket in the town centre.

Wine and beer prices are similar to the prices in Ireland.

Local transport: The ski gondolas (telecabines in French) bring you from Nendaz to the top of the neighbouring mountains. These cost a couple of euro.

Getting a Swiss travel pass will allow you travel on trains within Switzerland for three, four or eight days, depending on the pass. This is the best way to get to and from Nendaz during your stay.

The three-day pass is €210 and gives you free transport on all trains, buses and boats.

The pass also gives free entry to museums, as well as 50% off mountain passes.