You may have heard about Brendan before now as he is part of the current Apple World Gallery of images shot on his iPhone 6 and his photograph, below, is showcased on billboards across the world from New York to Sydney. 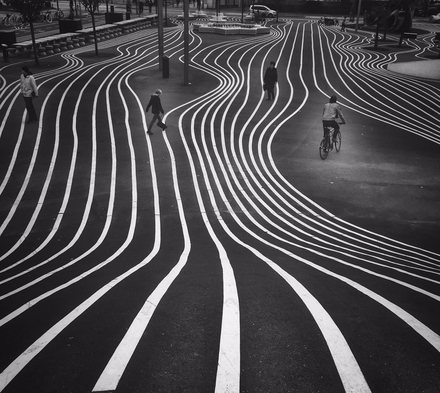 Having won the Mira Mobile Prize I was awarded an all-expenses-paid trip to Porto as the prize. I had been to Portugal before, but never to Portugal’s second city of Porto. I knew little about the city, except for its eponymous drink, its famous football team and it being on the Atlantic coast. Prior to leaving, I researched it a little and learned why this city always makes the top ten list of European cities to visit.

I got a short Ryanair flight from Dublin, leaving the wind and rain behind for the blue skies of sunny Porto. 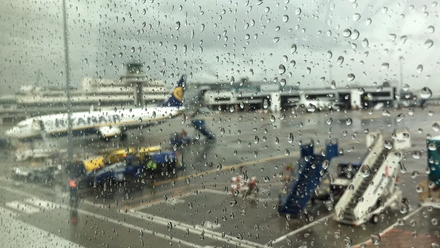 There to meet me were Manuela, the organizer of the Mira Mobile Prize, and her husband Joao. (They snapped me on arrival. Of course, with an iPhone.) 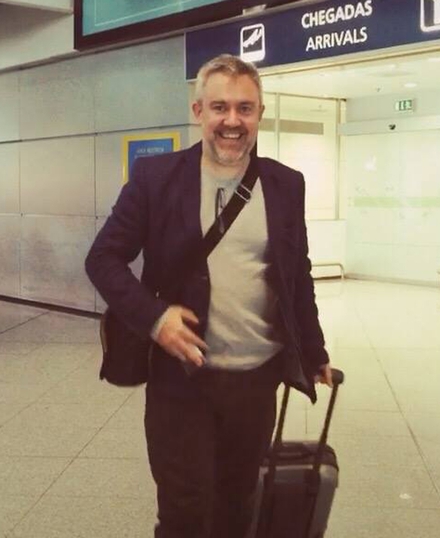 Getting around
Porto is hilly and the old, cobbled streets can be hard on the feet, but it is compact and easily navigated. Being hilly, its landmarks are easily identifiable as you wander around.

A three-day tourist bus pass costs €15 and this allows you to use all local buses, metros and trains. You can buy this in most bus or train stations.

The best way to get your bearings and see the sights is to hop on one of the city’s many bus tours. The red bus tour costs €13 and is well worth it. You can choose your departure point from any of the bus stops and the entire tour, without hopping off, takes just over two hours. Highlights are: Santo Ildefonso church, Dos Clerigos Tower (for wonderful 360 degree views of the city), the Atlantic coast, the Riberia area, the Port caves in Gaia, that wonderful bookshop whose staircase was used in the Harry Potter films – Livraria Lello, and if you are a football fan, then you have to visit Porto’s Estadio Do Dragao. 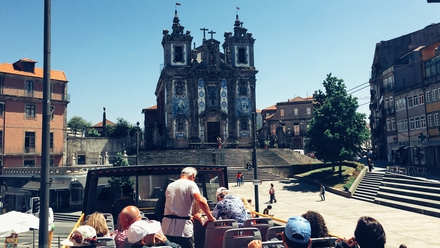 Santo Ildefonso church as seen from the bus tour 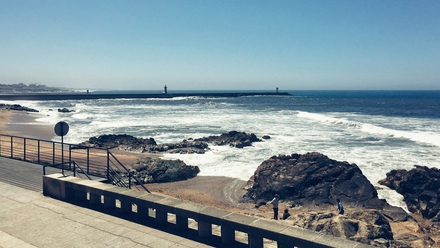 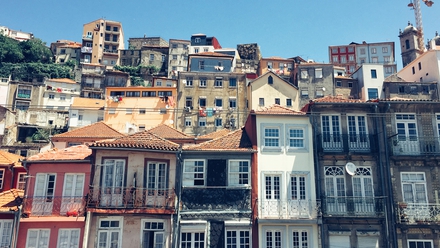 Restaurants
Food in Porto is good and very reasonably priced. A set lunch menu in many of the town’s restaurants will cost no more than €7 or €8 for a three-course meal including drinks. Tripe is a favourite with the locals and while it may not be to my taste, I did try another of their local dishes, Francesinha, a large triple decker sandwich that comes with a spicy tomato sauce and a plentiful supply of chips. Eating in Café Capri in the historic Campanha district, I had this meal, including wine, for €6.

If you are looking for somewhere for dinner with a view of the river and the Dom Luis bridge, Bacalhau Restaurant on Muro dos Bacalhoeiros in Riberia is the place to head to. Perched high above the river the terrace allows the most-wonderful of views over the river and onto the Dom Luis bridge. Being in Portugal, I had to try some cod and to wash it down some local ‘green’ wine - at €11 for a cod dish and €4 for a glass of wine this was pricey for Porto. But together with the food, the view, the atmosphere and the free wifi it all made for a pleasant evening. 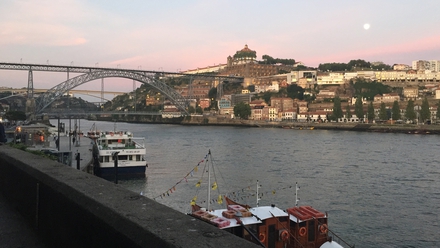 View from Bacalhau Restaurant looking over the River Douro

A visit to Porto would not be complete without a visit to its most famous café: Café Majestic. You step back in time as you enter and experience the wonderful belle-epoque ambience. At €3 for an espresso it might be expensive, but the attention to detail is impressive and the service is top class. 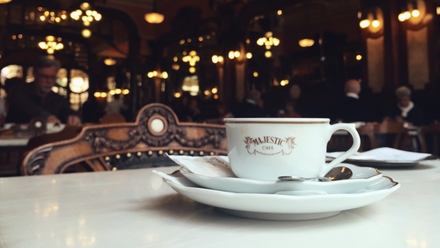 An espresso at Café Majestic on Rua de Santa Catarina

On the go, you can pop in for a quick coffee, beer or water in any of the city’s bars and very often you will get change back from a euro for a drink. It really is good value.

Exloring the Old Town
Porto is recognised by UNESCO as a World Heritage city and wandering among the steep, narrow lanes and alleyways that climb their way up to the town-centre, it is easy to imagine what life must have been like in the times when Porto was one of the world’s greatest ports, sending out explorers like Vasco da Gama and welcoming their treasure-laden ships back to shore. The old houses may appear dilapidated, but this is what gives them their charm. Looking up you can spot old women resting on the railings of balconies watching their washing sway in the breeze. The smell of food lingers in the lanes and the colours of the laundry hanging on washing lines looks striking against the brilliant blue of the sky. 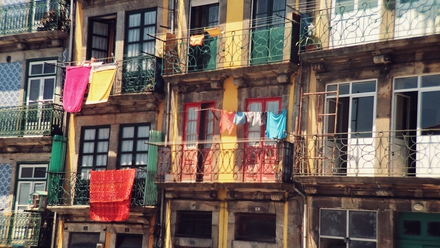 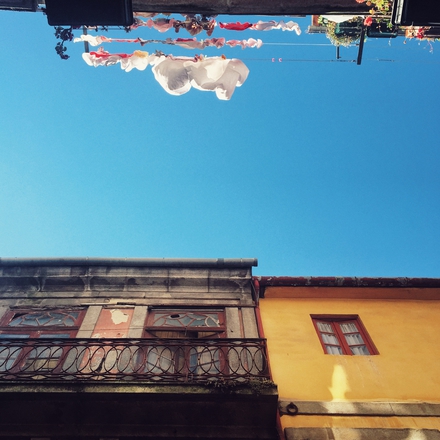 Eventually, you escape this maze of alleyways to enter the grand boulevard of Alliados that leads up to the town’s city hall and beyond to the main shopping areas around Rua de Santa Catarina, where you can find the usual range of well-known stores mixed in with Portuguese ones. 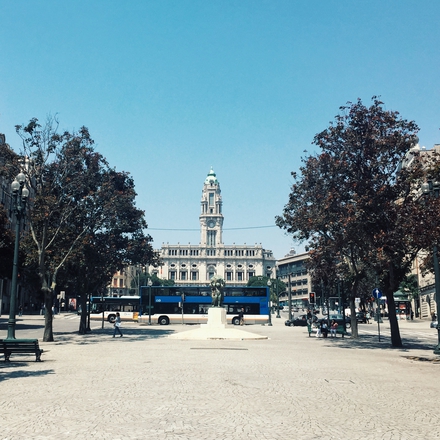 Bridges
Porto is a city of bridges crossing the River Douro. The most famous of these is the huge steel two-storied structure, Dom Luis, which connects the new town of Gaia and the old town of Porto. It has similarities in style to the Eiffel Tower and it is no surprise to learn that Gustav Eiffel was the engineer.

There are different ways to get up there but the most fun is to take the cable car which you can get on the Gaia side of town. It costs €5 for a single or €8 for a return. Arriving on the top of the bridge, you are afforded a magnificent panoramic view of the city, but you must have a good head for heights. At night, it is lit up. Try to get here around dusk to see the sun set. It is truly beautiful. 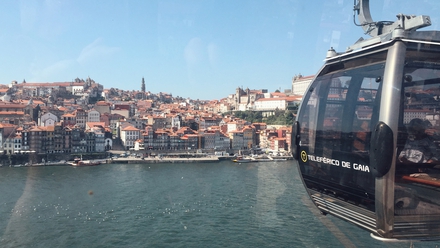 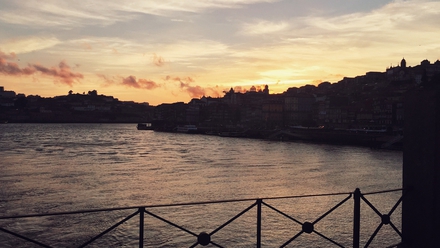 Atlantic Coast
Taking the number 500 bus from just opposite the Sao Bento Station will bring you out to Atlantic coast. I got off on Avenido Do Brasil and the first sight to greet me was that of a man sitting in a meditative pose as the wild waves crashed against the rocks and shot up a spray that left him soaked. Instinctively, I got the iPhone out to capture the moment. Living in Ireland, we are used to the Atlantic but I have never seen it so wild. Apparently, this is not uncommon in Porto. I ventured into a café bar, took a seat on the terrace and had a beer while I watched the waves crash against the rocks below. 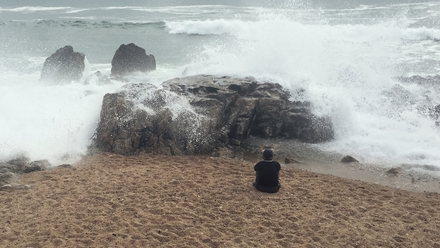 The wild Atlantic and a brave man 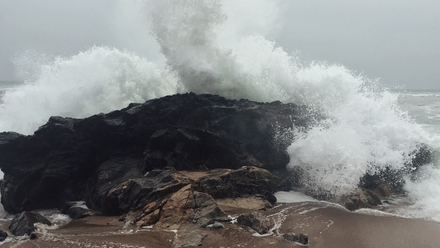 After the beer, I continued to walk along Avenido Do Brasil. In the distance, I saw the red and white of a lighthouse at the end of a pier and what appeared to be a lone fisherman casting his rod out to sea as around him the waves crashed. Not believing my eyes, but knowing this was a photo opportunity I quickened my pace to get out there. Ignoring the flashing red lights of perigro (danger) warnings, I ventured out as far as I felt was safe and there he was, perched on the side of the pier nonchalantly fishing. Fearing for my safety, I stayed until I could get him in the action of casting and then scarpered. I do hope his catch for the day was worth the risk. 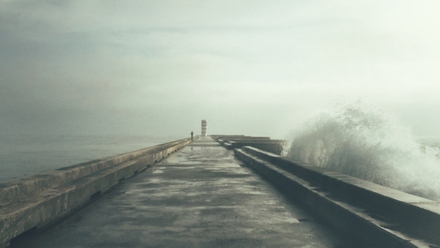 Art
If you are looking for art, Porto is a great place. Your first stop has to be at the Espacio Mira and Mira Forum art galleries in Campanha. This is the gallery which organised the international mobile photography competition.

Manuela and Joao Matos Monteiro (Gallery owners) and myself at the Mira Forum, Porto

A little outside town, but worth the trek is Serralves Museum which has wonderful architecture, installations and gardens.

All in all
Like many countries, the second city is the most charming and Porto is no exception. My hosts, Manuela and Joao were wonderful ambassadors for their city. I loved my short time in their town and while I thoroughly enjoyed the sights and all the city had to offer, it is the warmth and kindness of its people that would encourage me to make a return trip; this time not alone, but with my family.

Getting there
Ryanair flies there twice a week from Dublin: Mondays and Fridays, with flights taking just over two hours.

Where to stay
I did not need to look for accommodation in Porto as I was staying in the apartment attached to the gallery. However, I would always recommend accommodation on Air BnB. Also, check out Tripadvisor’s advice on Porto hotels.

When to go
Porto has a wonderful climate.  The weather while I was there was a wonderful 23 to 25 degrees. It does get hot in summer, particularly in August, but each season would bring its own charm to this wonderful Portuguese city.