Menswear fashion used to make up just one day on the London Fashion Week schedule, until June 2012, when it divorced itself from its usual time slot and went out on its own. The brainchild of Dylan Jones, editor of British GQ, and the British Fashion Council, London Collection: Mens is held twice yearly, spans three days of shows, presentations and very nice events in Europe’s newly declared fashion capital.

A slightly less manic fashion week than its female counterpart, menswear attracts editors and bloggers alike, yours truly included, as some of the best fashion houses in the business show their wares to the waiting journalists. And it’s not just about the fashion. The parties warrant a mention too, from cocktails with Duchamp to dinner with Dolce and Gabbana, I’ve been up close and personal with boy’s clothes for a whole weekend, and honestly, Spring Summer 2014 never looked so good.

Never will there be more print-heavy season menswear, with designers embracing contemporary design methods such as digital prints at Agi and Sam, versus good old fashion tie-dye at Oliver Spencer. We routinely associate menswear prints with shirts, but next spring/summer promises some expansion into jackets and trousers. Orlebar Brown, however, is the one to watch with inspiration coming from Monaco; beautiful illustrations of summers in Monte Carlo are imprinted onto t-shirts and shirts, juxtaposed by simple but wearable cotton Breton stripe tops. 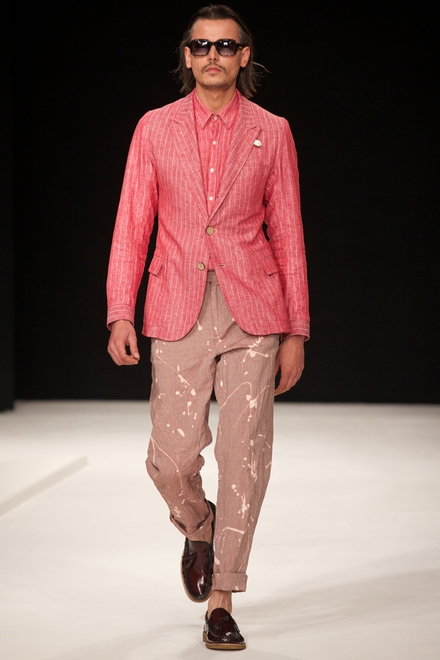 The age old question of what colours will be on trend is incredibly relevant at this London Collections, simply because SS14 will be a rainbow as far as I can see. Jonathan Saunders borrowed from this season’s womenswear trend of neon, with a luminous yellow, almost lime, satin bomber jacket being a prominent piece (not for the fainthearted). And it didn’t stop there, Richard Nichol experiments with cobalt blue trench coats, John Smedley fancies a sweet red polo neck and Orlebar Brown prefers rich plum, perhaps a little autumnal but sophisticated all the same.

Probably stating the obvious, but London Collections is all about the suits, in my view. Topping the bill was Spencer Hart with a funk influence flowing through the collection complimented by the James Brown soundtrack. Model David Gandy, Presenter Dermot O’Leary and Downton Abbey actor Dan Stevens all seem to agree too, as they sat front and centre to see what Nick Hart produced this season. Richard James and Hackett met the standard with impeccable cut two piece suits in light and bright colours like dusky blue. Although, the highlight for me was attending a reception with Duchamp to peruse some three piece brocade suits and chat to owner Marc Psarolis who is passionate about his collection for next season.

Shoes and bags are the statement pieces, and leading the way is none other than Jimmy Choo. High top sneakers and loafers with studded detailing were fashion favourites with Instagram flooding with imagery from the fashion elite. The men of fashion week appear to favour document wallets, which designers have picked on cleverly; Hackett, Hunter Gather and Jonathon Saunders some of my personal favourites.

You know trends aside, menswear has hit a new stride, with attendance at London Collections on the rise, and the statement fashion is making by separating fashion weeks, we are paying more attention. Being endorsed by big names like Samuel L Jackson, Jessie Metcalfe and Idris Elba who were regular “FROWers” over the last few days… boys It’s time to start paying attention.