The exhibition has been given the official title 'Ballgowns: British glamour since 1950'. The opening ceremony took place at the newly renovated galleries on Tuesday evening, with the official public opening commencing on Saturday.

The show will run until January 2013 and features 60 dresses from different decades. 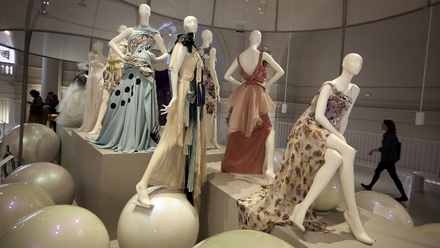 The exhibition is curated by Oriole Cullen and Sonnet Stanfill, with Cullen saying "we looked for examples that would both exemplify their periods and look stunning on display".

"We also aimed to select a number of gowns that had compelling stories associated with them. Many of the dresses have not been displayed before. In addition, we've been able to highlight a number of stories around the wearers and occasions associated with the gowns. The whimsical exhibition design creates a fantasy-like setting which will surprise and delight our visitors" she added, speaking to Vogue. 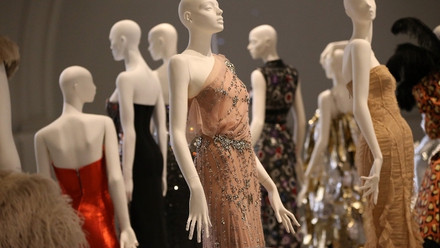 "Many of the gowns have been worn by well-known figures and celebrities, but there are also some wonderful garments from the archives by lesser known designers, that are very impressive and cleverly designed." Stanfill added

A dress designed by Ralph & Russo for Beyoncé is part of the exhibition. The bespoke creation reportedly took three months to hand-sew and is almost entirely encrusted with over 20,000 Swarovski crystals. 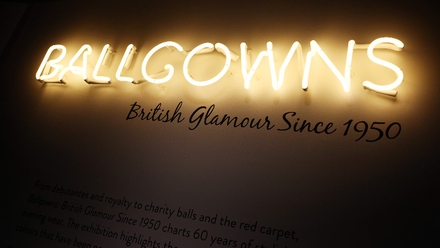 Rising British design talent Roksanda Illincic, whose creation is one of the featured gowns, said "When I was a student, I felt like the V&A was unreachable - there is no place like it and I always loved coming here," said Ilincic. "The piece featured is an early one and is really dear to me. There is a lot of work that went into it and the V&A appreciated that". 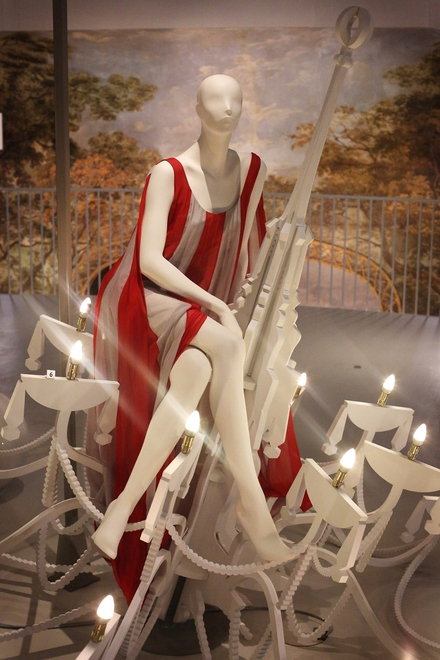 A silk dress by Amanda Wakeley displayed in the collection

Other notable gowns include the Alexander McQueen gown that Daphne Guinness for for last year's Met Ball, alongside a bright, strapless yellow Erdem gown, a gold lamé Zandra Rhodes design and a dress by John Galliano. 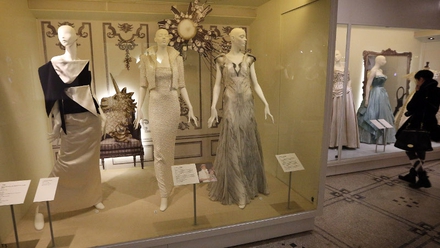 The middle dress, a white ballgown with jacket detail, was designed for Diana, Princess of Wales, by Catherine Walker

Designers at the top of their game came out to support the opening of the exhibition including Sarah Burton of Alexander McQueen, Patrick Grant of E.Tautz, Christopher Kane, Erdem, Gareth Pugh and John Rocha. 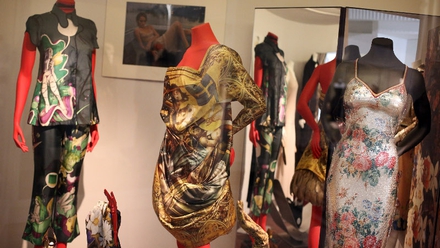 Model Laura Bailey and actress Joan Collins also attended the opening. A dress Collins wore, designed by Elizabeth and David Emanuel is featured in the exhibition. 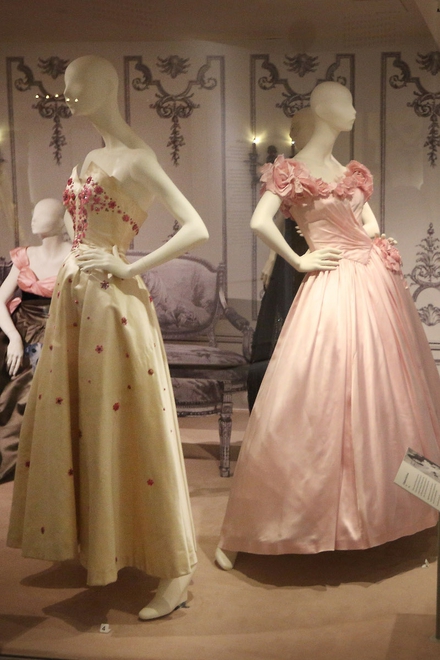 The pink taffeta dress worn by Joan Collins exhibited on the right, designed by Elizabeth and David Emanuel. Dress on the left is by Norman Hartnell