Not only do they have Franca Sozzani and Italian Vogue which is the World’s finest Vogue, but they also have Milan and its exhuberant and decadent fashion weeks. January has played host to the first major fashion week of 2012, the menswear week in Milan

Not only do homegrown brands show in Milan but exports like Britain’s Vivienne Westwood and Burberry choose Milan, while Scotland’s Jonathan Saunders and Pringle also show. American brands like Calvin Klein, Jil Sander choose to show in Milan alongside Canadian-born, but Italian-based label Dsquared2.

This season is showcasing the collections of Autumn/Winter 2012-2013. While there is never only one trend, there are always waves of similarities and this season is no different! We have rounded up key looks from each major show and we will disect the trends with you in mind. 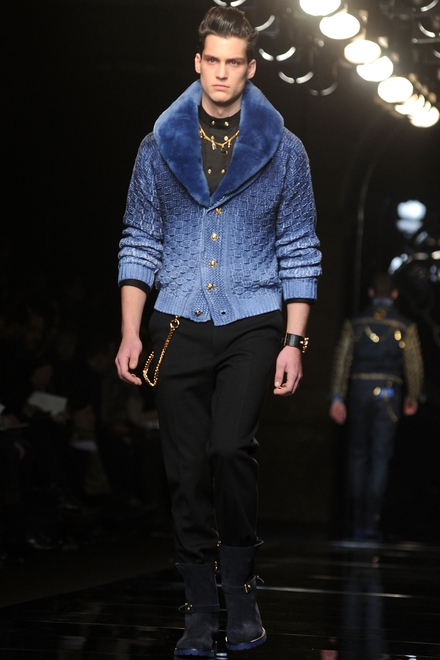 Versace had indulgent fabrics, lots of blue and lots of denim, all accessorised with biker boots

Black is always a go-to colour no matter what the season because menswear usually gravitates around evening and formalwear. Though, the classic black penguin tux has been getting stiff competition this upcoming season from velvet and print suits! Velvet has been the choice of many designers and some include full suits in gorgeous jewel tones, while others have done a quirky take on printed suits, like Moschino who had a few models in brick patterned suits! 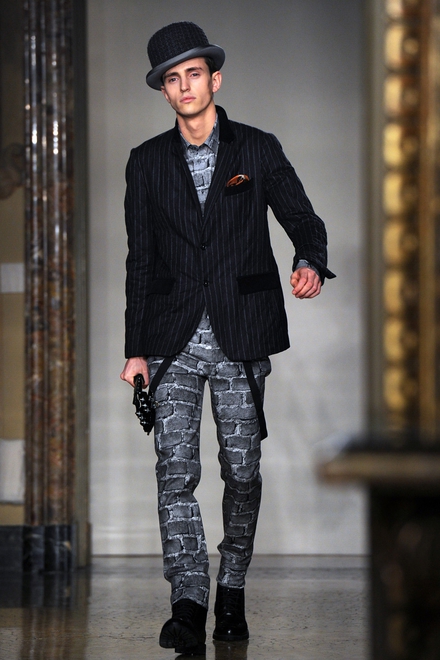 Speaking of jewels, jewel tones are everywhere. Deep teals, rich purples and glimmering juicy orange tones were featured almost across the board, alongside gold and ruby colours. Signature autumnal colours like tan and brown featured, but not as heavily as previous years. It seems A/W 12 will be all about rich colours like midnight blue and deep russet. In saying that, neon colours burst onto some runways so we will leave it to interpretation how the high street will interpret the colour schemes. 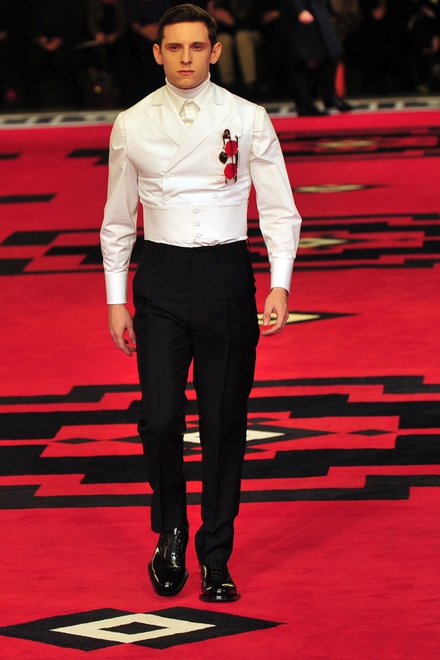 Red was also quite prominent in labels like Prada and Versace, look out for statement reds. Zara done some beautiful coats in red and orange this winter past, so look out for bold red coats and block red jumpers next A/W. 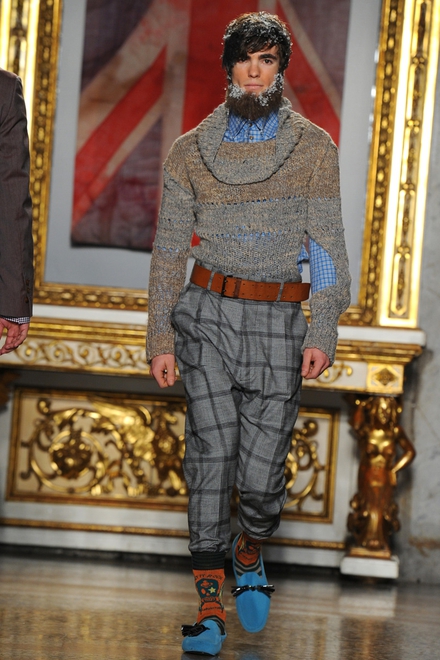 Bid your cold neck farewell because scarves and, in particular, polar necks are going to blow up. Across the board, polar necks featured prominently (Bottega Veneta, Prada, Pringle of Scotland) in a variety of colours. Some designers like Cavalli and Etro sent out oversized scarves and capes in really luxurious fabrics and prints. Keeping with anatomy, the male bust is the highlight of the season. Lapels, collars and aforementioned accessories hug and accentuate the neck and shoulders for A/W. 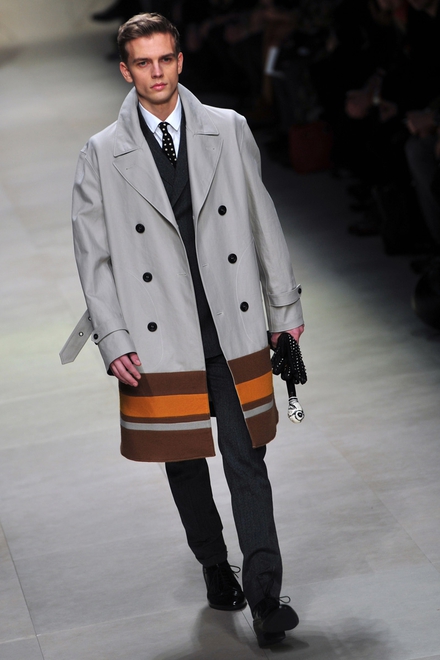 A model walks during the Burberry show

The last major trend is panelling. Jumpers, knits, blazers and even trousers were all victim to panelling. Whether it be a two-tone pair of pants like Bottega, cut-out panelled knits at Westwood or Crocodile skin-panelled jumpers at Calvin Klein, it’s all about giving one piece a little taster of something more. Usually the panels are felt, velvet or some other interesting fabric to work against the base material of the clothing. Look out for this trend, which we saw quite a bit of in 2011, be taken to the next level, and then some!