You can listen to the latest episode of RTÉjr Radio's Science show, Let's Dive In, here now. On this show your hosts Julie and Phil are joined by Collie Ennis to find out why insects are crucial for life on planet Earth.

Here, 6-year-old Oliver asked us a very important question - why are insects important?

Listen and subscribe to the podcast wherever you get yours here!

Julie is here to help answer the question and tell us more about the show...

Before answering this, we need to establish what an insect actually is. An insect is not a worm. Or a spider. An insect is very specific, says Collie Ennis, zoologist, Critter Shed podcast host and insect expert who joined us on the show to help us. "It's got three sections to its body. It’ll have six legs. And that’s how you’ll identify them. And a lot of them will have wings or a part of their lifecycle around flying." 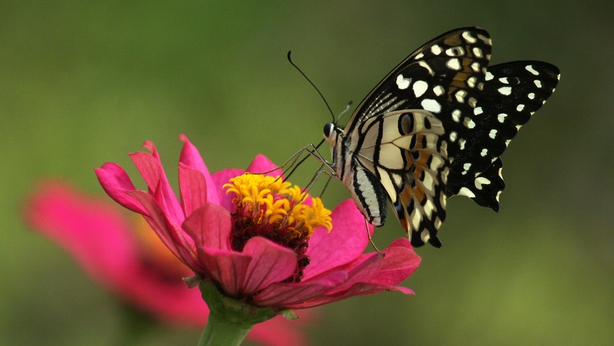 Here are a few things that insects are not: snail, spider, caterpillar, slugs, snakes.

But the caterpillar turns into a butterfly, which is an insect. So how does that work? The process is called Metamorphosis.

"It’s the larval stage of an insect," says Collie. "And it’s very similar for a lot of insects like beetles, which make up a massive amount of the insect world. Most of the insects are actually beetles"

According to the Royal Entomological Society, there are more than a million described insects on planet Earth, and around 300,000 to 400,000 of them are beetles.

So, during the life cycle of these insects that go through metamorphosis, they start as an egg, turn into a larva, pupate and turn into an insect. This happens for land-dwelling insects and for ancient insects like dragonflies and damselflies. "Their larvae live[s] underwater," says Collie. "They hatch out from an egg that’s laid by an adult underwater. They’ll feed underwater. Have a mostly aquatic existence. Climb out onto a branch, split themselves open and pull themselves out of the old body. Then produce their wings, fly off, and reproduce and the cycle starts again."

These ancient aquatic insects have been around for 380-480 million years, and they’ve played a vital role in the planet’s ecosystem. "People are realising how important insects are."

The reason they’re so important, says Collie, is that "insects are the cornerstone of our food chains and our food webs."

Everything relies on them for food, for cleaning up the environment. "Without insects on the planet, even ourselves would find it difficult to exist. Apart from plants, they are the most important thing on the planet that’s alive"

So basically, the bugs run the world. "They ruled the world for quite a while before vertebrate animals came out onto land. It was, it literally was, the land of insects and arthropods."

So, a take home message - look after the insects! Don’t kill ants in your house, follow the trails and find out where they come from! Or if you’ve got a mosquito problem get a pet spider! They’ll eat them for you!

Tune into the show to find out more about insects, and why Collie would love to have a time machine and travel back to the Land of insects and arthropods.