In this episode of Let's Dive In, RTÉjr Radio's science podcast, Julie and Phil welcome retired NASA astronaut Bruce Melnick back to the show to talk about the time in space.

Julie tells us more about the show here...

"What time is it?" is a question asked by billions of people around the world everyday, probably several times a day. But when 5-year-old Oscar from Bristol asked us: "What time is it on the International Space Station?" Well, at first, we thought it would be the same time as where the command centre is, in Houston, Texas. But that wasn't right. Then we thought, well maybe it's the same time as it is where the ISS was launched from - Kazakhstan. Turns out, that’s not it either!

So, we called our space expert, retired NASA astronaut Bruce Melnick from the Kennedy Space Center Visitor Complex, to help us once more. "Well, it’s the same time that you have. We use Universal Coordinated Time, which used to be GMT, Greenwich Mean Time… so that everybody can speak in one time zone."

But, if it’s 3 o’clock in the afternoon here, when the sun is up and it's daylight in the UK, it might not be where the International Space Station (ISS) is. "Depending on where they are around the earth, it could be daylight, it could be dark, it could be sunrise, it could be sunset," Bruce tell us. It takes the ISS only 1 hour and 30 minutes to go all the way around the Earth, "so every 45 minutes the astronauts up there are seeing a sunrise or a sunset!" How cool is that?! 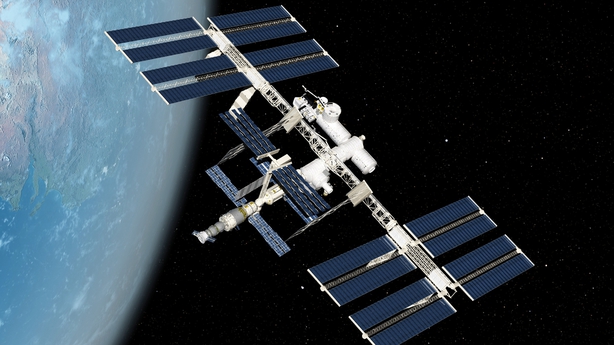 "What they’ll do is at 6 o’clock in the morning they’ll turn on all the lights bright on in the space station in the sleeping areas, and when it’s time to go to sleep they’ll darken everything when it’s dark." And Bruce tells us, there aren’t many windows on the ISS so you don’t really know what is going on outside.

But, the BIG question is: Do the astronauts wear watches on the ISS? The answer is - yes! Obviously. And even BIGGER BUT is this - when Bruce was up in space he had FOUR watches on. Two on each wrist! "When I was flying in the space shuttle… we kept track of a whole bunch of different times. On one wrist you would normally keep track of Houston time, because that’s where your family is, and Kennedy Space Center time because that’s where you launched from." Then on the other wrist, Bruce used to wear another two watches: one for UTC, and the other for mission elapsed time - the amount of time passed since launch. WOA

Thanks to Bruce Melnick from the Kennedy Space Center Visitor Complex for sharing his stories and answering Oscar’s question. We’re super excited because Bruce will be back for another episode this season, so please subscribe to make sure you don’t miss the episode!

And don’t forget, if you’d like us to answer your question, send it to us via social, where you can contact Phil or Julie.