Reading Football Club and the University of Reading have teamed up to highlight climate change with their new home kit which shows the temperature rising in the area over the past 150 years.

The sleeves of their hooped jersey put the spotlight on the Show Your Stripes campaign created by Professor Ed Hawkins, a Climate Scientist from the University of Reading.

Ed explains that the club were speaking to them about how they could become more sustainable when, on one visit, there was a Eureka moment.

"The club were coming to us discussing various ideas on sustainability and one day their Head of Commercial, Tim Kilpatrick, asked about the stripes he was seeing around campus. We explained they were the Climate Stripes and the idea grew from there. It was a case of Reading FC saying let's be brave and use the concept to start a conversation among football fans.

"It has already worked as fans were wondering about the new sleeve design, which contains the now familiar red and blue stripes. It's about getting people to ask questions and learn. The fact that the stripes we used were from the past 150 years in Reading means they are more aware of what is going on locally. I'd love to think that at half-time in games the jersey would mean conversations starting about what is going on and what can we do about climate change."

The story of the stripes

"The first time they were used at an event was actually a literary and arts festival in Wales - the Hay Festival. They were keen to do something in relation to climate change and the environment, so scientists were invited along with artists and poets like Nicola Davies who I was speaking with on the day.

"I was looking for a simple way to show an audience what was going on, bearing in mind this was not a science festival. It was a case of showing the science as simply as possible and the stripes seemed like a good idea. When they went up on screen you could see people's eyes open up and they were really engaged.

"The stripes I created were from the area of Hay, and it helped people see climate change where they live. We normally see it in a global context, but the fact you can have local stripes means we look at it in a new way. When we feel the effects of climate change it can be seen in the stripes, even looking at the Ireland chart."

What's going on in Ireland? 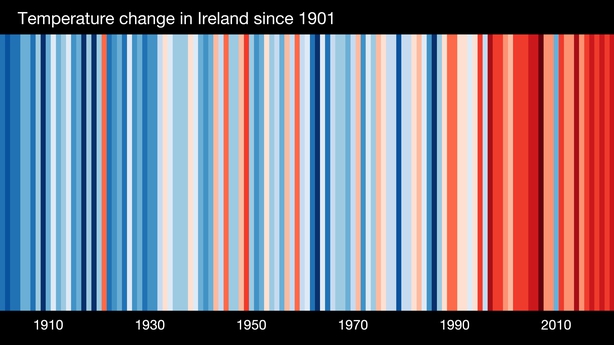 Head over to the Show Your Stripes website to see what is happening all over the world.

How do they work?

The stark band of deep red stripes on the right-hand side of the graphic show the rapid heating of our planet in recent decades.