LET'S FIND OUT features Captain Zoom and her crew of scientists with exciting experiments, curious kids and a trip to a faraway place.

Watch the full show now on the RTÉ Player!

Seeing a pinata explode during Mark’s birthday party makes Zoom wonder, "what is an explosion anyway?" After discovering that it’s a sudden release of energy, two curious kids show her a chemical reaction that causes an explosion.

As always, experiments must be done under adult supervision!

Teachers and educators can download a full lesson plan here... 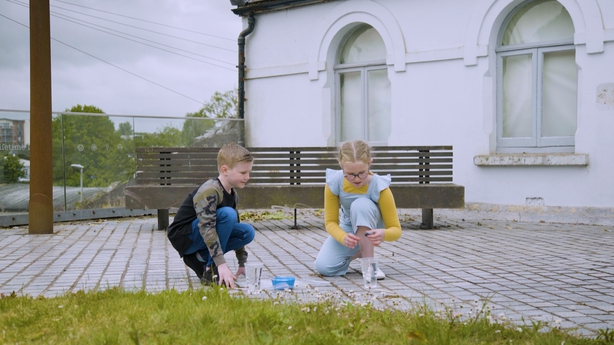 1. Put 3 heaped tablespoons of bread soda into the resealable bag.
2. Measure out 350ml (1.5 cups) of vinegar.
3. Add a few drops of food colouring to the vinegar and mix.
4. Bring the bag (with the bread soda in it) outside and lay flat on the ground.
5. Place the cup containing the vinegar into the bag and seal the bag (as per video).
6. When ready, tip the cup containing the vinegar over, inside the bag and shake the bag.
7. Leave the bag on the ground and run away as fast as you can! What happens?

This mini coloured explosion was created by a chemical reaction between the vinegar (called an acid) and the bread soda (called an alkali or base). When they mix together inside the bag they create a gas called carbon dioxide which builds up until the bag cannot expand anymore and it explodes.

Also in this episode...

Mark and Amy make an exploding whoosh bottle that works in the same way as a rocket or a jet plane. And the whole crew go see some really colourful explosions: fireworks!

Click here to see all the experiments from the series!