It's time for another amazing experiment with Amy, Mark and Zoom aboard the spaceship curiosity on RTÉjr science show Let's Find Out!

It's made with the help of Science Foundation Ireland and it helps explain the world round us.

Here, Zoom finds out that snow is made up of water crystals, so two curious kids, Sophie and Patrick, show her how to make another kind of amazing crystal!

Now you can make your crystals!

CAUTION: the solution may become warm when the crystals form - please do not touch the container. 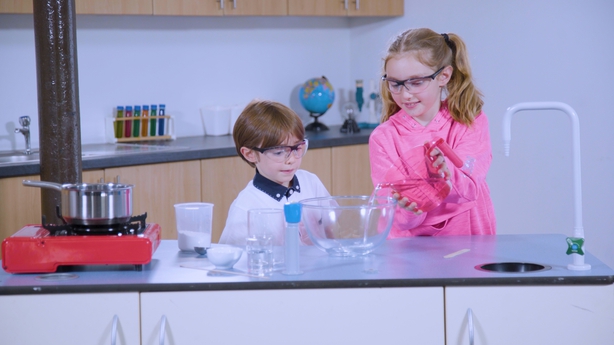 If you want to repeat this again you can ask an adult to place the jug into a pot of hot water. Heat the pot of water on a medium heat until the solution is clear and all the crystals have dissolved.
Ask an adult to turn off the heat and remove the jug.
You can then let it cool and start again.
If you repeat this many times, you may notice that the solution forms back into crystals as it cools. If this happens, simply add a half teaspoon of clear, malt vinegar to it, mix and return to step 4.

SO WHY IS IT CALLED 'HOT ICE'?

This is where the name HOT ICE comes from and sodium acetate is used to make hand warmers, applying this very same principle.

Also in this episode:
Mark and Amy show Zoom that sliding is possible because there’s very little friction between the snow and a sled. And the whole crew go to a place with lots of snow and sliding - the snowy mountains!

Check out the RTÉ Player to watch the full episode HERE and all the series so far HERE!!

AND there are lots more experiments with videos and full instructions - Just click HERE!