In the latest episode of Let's Dive In, RTÉjr Radio's science show, our hosts Julie and Phil speak to a real life Tarzan about giraffes and their long necks, and to Zookeeper Tom about how to look after giraffes!

Tune to RTÉjr Radio or press play above now!

Our question for this episode comes from seven-year-old Ben, who wants to know: How did the giraffe get such a long neck?

It’s all down to evolution, really, which takes millions of years. And according to Tarzan, AKA wildlife conservation biologist Fred Bercovitch, there are three main theories as to why the giraffes evolved that long neck. 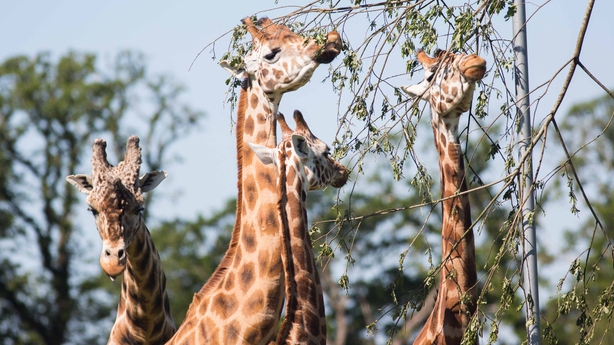 "They evolved long necks mainly to feed on top of trees. So that’s called the browsing hypothesis… there’s two other ideas. One is they evolved their long necks as a watchtower. They’re so high up off the ground they can look out for predators. And the third is they’re useful for male-male battles…" says Fred.

But ultimately, the structure evolved because of where they live. "They evolved to live in a pretty arid environment. An arid and dry environment, to cover long distances. And they managed to adapt to feeding on a scattered resource, which were trees that grew in this savannah environment. So they were able to eat food that other animals couldn’t get to."

Tune in to the episode to find out how many the bones are in a giraffe’s neck, how they look compared to human bones and how they are connected together to give the giraffes’ neck such flexibility.

And, Phil visits Dublin Zoo where he chats to Zookeeper Tom who tells us how they look after the giraffes who live in the Phoenix Park!