Our friends at the Marine Institute have joined together with a host of organisations to produce the Oceans of Learning 2021 series to celebrate our seas and Ireland's marine resource.

Oceans of Learning will enable everyone to engage with our ocean from anywhere with a new Sea Science series, educational videos and short films, news and online resources.

Check out RTÉ Learn where will dive below the waves with a special film from a remote control submarine!

Plus we will have lots of fun facts about the waters around Ireland.

There's something for everyone and the Oceans of Learning series explores all aspects of our marine resource - from our rich marine biodiversity, to our changing ocean climate, and our oceans future.

First up, get to know about the science of the high seas, and what lies below too!

The Marine Institute's Sea Science series with Mark Langtry aka 'The Science Guy’ is four-part series Mark bringing the wonders of sea science to the screen.

This week he is explaining Ocean Acidification! Join Mark every Thursday for this entertaining, sometimes explosive and totally educational shows.

It is a collaboration between the Irish Chamber Orchestra, Kerry'based wildlife and underwater filmmaker Vincent Hyland and the Marine Institute.

Ireland’s Marine Life – Meet the Cast takes a dive beneath the waves of Ireland’s wild Atlantic waves to explore the variety of sea life found in Irish waters.

Hear from Ireland's Deep Atlantic filmmaker Ken O'Sullivan and Professor Louise Allcock at NUI Galway about Ireland’s marine life, and Roberta O’Brien the first woman in the Irish Naval Service to achieve the rank of Commander.

Explorers Wild About Wildlife on the Seashore 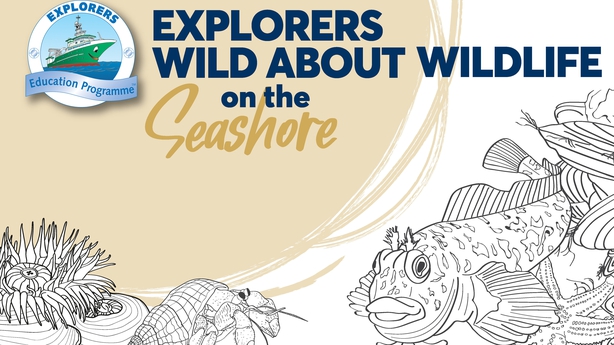 The Marine Institute's Explorers Wild about Wildlife on the Seashore short films provide an introduction to some of the amazing animals that can be found on the seashore.

Join the Explorers team as they investigate the diversity of the animals that can be found in the sand, amongst the seaweed, under rocks and in the rockpools.

There is so much more going on right now and there is a new podcast too. This week, in Episode 3, the crew discuss climate and the ocean - LISTEN HERE

Check out all the Oceans of Learning resources HERE

RTÉ Learn teamed up with the Marine Institute before - Check out more Oceans of Learning here!

The Marine Institute is working with the Department of Agriculture, Food and the Marine, the Department of Foreign Affairs, the European Commission and a range of partners across Ireland including Bord Iascaigh Mhara, Bord Bia, Met Éireann, Irish Chamber Orchestra, Irish Naval Service, SEAI, NUI Galway, UCC, Maynooth University, Irish Whale & Dolphin Group, Teagasc, Seavite, Codex Beauty, Green Rebel Marine, and GOAL to bring you Oceans of Learning to celebrate and highlight the vital role our ocean plays in all of our lives.