Bees are the most important pollinator of crops and native plant species in Ireland. They are a key component of our wildlife and one of the busiest, least appreciated work forces we have.

A study from the Department of the Environment found that bees are worth €53m a year to the economy.

In Ireland crops such as apples, strawberries, raspberries, tomatoes, blackcurrants, peppers, courgettes and pumpkins are reliant on bees for pollination.

It is estimated that almost three quarters of our wild plants rely on insect pollinators, of which bees are most important.

There was great excitement in March 2022 when a new bee was spotted. The Hairy-footed Flower Bee (Anthophora plumipes) has migrated from Britain to set up home in Ireland for the first time. The first sighting was made by Mary Molloy in her garden in Harold's Cross, Dublin on the 27 March 2022.

This means that, according to our friends at Pollinators.ie Ireland now has 100 different wild bee species, including 21 different bumblebee species, and 79 different solitary species. Plus, one species of honey bee.

Read more about the different families below! Did you know that 95% of the worlds 20,000 species of bee are solitary rather than social bees? Ireland has 100 wil bee species and 79 of them are solitary bees.

Solitary bees exist as a male and a female. When a male and female solitary bee have mated and prepared a nest for their eggs, they die off leaving the eggs to overwinter, and the young to emerge and fend for themselves the following year.

Solitary bees look very different from bumblebees. They are much smaller and occur in a range of different shapes and colours. Some species are small and black like ants with wings, while others have black and yellow striped bodies like wasps

Irish solitary species nest in various different ways. Leafcutter solitary bees cut circular pieces out of leaves with their teeth and carry them back to line their nests, often in hollowed out twigs or bamboo canes.

Mining solitary bees make their nests by digging holes in the ground. One solitary species called Osmia aurulenta lives in sand dunes and will only nest in empty snail shells

Climate change will bring new solitary species to our shores. The violet carpenter bee (Xylocopa viloacea) arrived in Waterford in 2007, although it hasn't been seen since.

Most solitary species are small and relatively inconspicuous, but Xylocopa viloacea looks like a bluebottle on steroids! 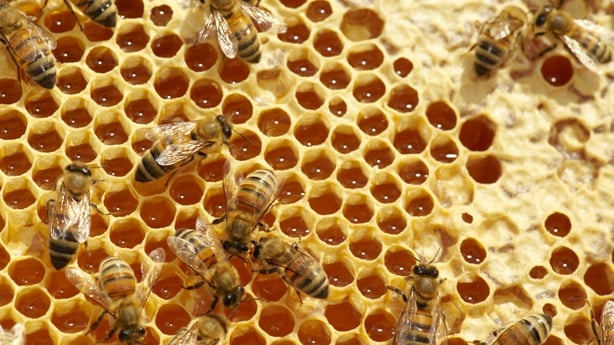 Ireland has one species of honeybee (Apis mellifera). There are an estimated 24,000 bee hives in Ireland.

The honeybee is native to Ireland but honeybees of French, Dutch, Italian and Russian extraction were imported here after disease wiped out many hives between the wars.

The Irish honeybees fell in with this new company and today many of Ireland's hives contain honeybees that are more cosmopolitan rather than native to these shores.

Today the importation of honeybees is strongly discouraged to avoid introducing pests and diseases.

Fortunately Ireland does still have reserves of the pure native strain of the Dark European Honey bee. The Galtee Bee Breeding Group was founded in 1991 with the object of conservation, study and improvement of local strains of our indigenous honeybee. The Native Irish Honey Bee Society was set up in 2012.

Worker honeybees have a barbed sting. They can only sting mammals once as the sting catches in the skin and tears loose from the bees abdomen, leading to death in minutes.

Honeybee queens have a smooth sting which they could use multiple times, but they rarely leave the hive, instead using their sting to dispatch rival queens.

In the Stealthy Insect Sensor Project, Los Alamos scientists trained honeybees to recognize explosives. Honey bees natural reaction to nectar is to stick out their tongue.

Los Alamos scientists trained them to do this when they detected explosives instead. 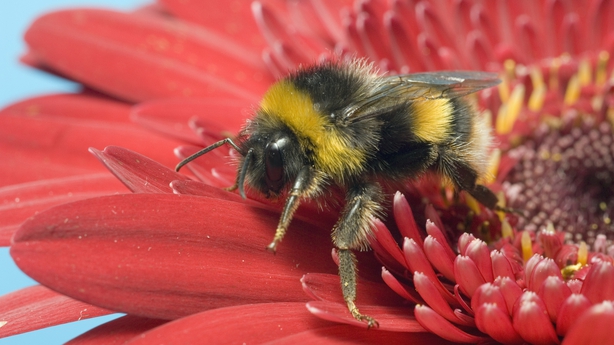 Like the honeybee, bumblebees are social bees. They live in colonies with a queen, many female workers, and some males.

Ireland has 21 native bumblebee species. Of these, six species are cuckoo bumblebees. These cuckoo species don't make their own nests, but instead lay their eggs in the nest of a true bumblebee who will inadvertently bring up their young.

As with all bees, only the females can sting! Female bumblebees can sting more than once. Bumblebees are not at all aggressive and are interested only in collecting pollen and nectar.

Four of Ireland’s bumblebees are endangered and two are vulnerable. The Great yellow bumblebee is on the verge of extinction from Ireland.

Bumblebees are more primitive and don’t make honey like honeybees. Instead they store a little bit of nectar in wax nectar pots in their nests for emergencies.

This means that a bumblebee colony is never more than a few days away from starvation, making Ireland and its climate a challenging place to live!

Using DNA extracted from a tiny portion of bumblebees legs, researchers identified a new Irish bumblebee species in 2007. It is called the Cryptic bumblebee, Bombus cryptarum.

Bumblebees can travel up to 5km to feed but commonly forage within 1km of their nest.

Bumblebees have very powerful wing muscles. They have evolved a special adaptation that allows them to decouple these muscles from the wing. This allows them to use the wing muscles to generate heat and then reattach them before flying off.

There is loads more to learn thanks to the National Biodiversity Data Centre HERE!