This week has seen two major volcanic eruptions, so it's a great time to try to learn why these spectacular events occur.

Dr Siobhán Power of Geological Survey Ireland answers some questions, but first let's catch up on the news...

Earlier in the week the Italy's Mount Etna exploded into life. Check out the RTÉ News article here:

At 3,324 metres, Etna is the tallest active volcano in Europe and has erupted frequently in the past 500,000 years.

Mount Etna sent a massive pillar of smoke and ash into the sky over Sicily this morning, as seismic activity continued for the third day this week | https://t.co/Igb17D0hWw pic.twitter.com/F4cDmhduut 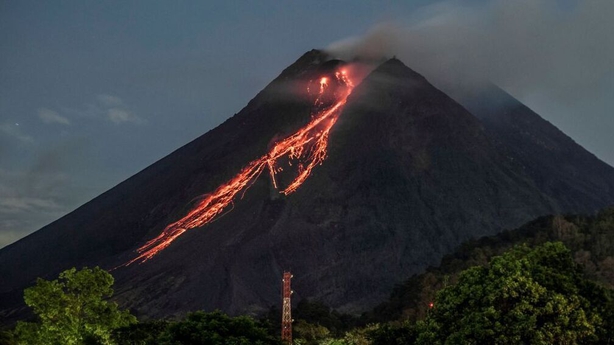 And then Indonesia's Mount Merapi exploded with streams of fiery lava days later. It is one of the most active volcanoes in the world.

Indonesia alone has an amazing 130 active volcanoes! You can read all about this latest event below.

Check out the details of the latest Mount Merapi eruption on RTÉ.ie

To help explain what is going on, and to teach us more about volcanoes Dr Siobhán Power of Geological Survey Ireland has answered some questions below...

What causes a volcano to erupt?
Rocks melt beneath the surface of the earth and the magma rises up as it is less dense than the surrounding rocks. Pressure builds up and eventually this pressure is released in the form of an eruption. It is very like when you shake a bottle of a soft drink and then open the lid. It just goes everywhere!

The type of eruption depends on the type of rock that has melted to form the magma and the amount of gases in the magma. Some volcanoes erupt as lava flows, but some erupt plumes of rock fragments, volcanic glass and gas into the atmosphere.

Is there any reason why we are seeing so much activity this week?
There's no reason to connect the eruptions. But they are very famous volcanoes erupting around the same time so they are in the news. There are others erupting around the world that have not made it into the news. So many you could not report on them all. Mount Stromboli in Italy erupts all the time!

How can you predict eruptions?
It is difficult to predict a volcanic eruption. In countries with active volcanoes, geologists are constantly monitoring the volcanoes. They take note of changes in ground temperature, increases or changes in gases coming from small fissures, and any changes or movements in the ground close to the volcano.

These changes tell the geologists that an eruption might happen soon.The geologists learn to understand the normal actions of the volcano and can see when something is different. Places with active explosive volcanoes have evacuation plans for the people.

How many active volcanoes are there worldwide?
It is thought that there are around 1,500 active volcanoes worldwide. They are mostly at tectonic plate boundaries but it is possible to have chains of volcanoes in a plate if there is a hot spot beneath the crust.

In Europe, we have a few famous volcanoes including Mount Etna and Mount Vesuvius in Italy. Iceland is on the mid-Atlantic ridge, where two plates are pushing apart, and the whole Iceland was formed by volcanic eruptions. 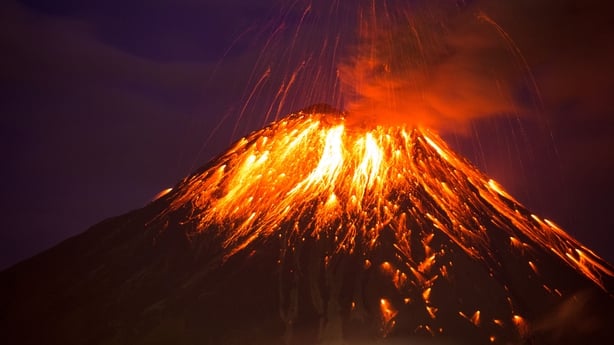 This is due to the movement of the tectonic plates, plates are being pushed beneath other plates. As one plate goes under another, it causes melting and volcanic eruptions.

This is happening all around the Pacific and so we have lots of volcanoes in east Asia and west North, Central and South America.

And were there ever volcanoes in Ireland?
Ireland is not on a plate boundary now as therefore does not have an active volcanoes. We have been at plate boundaries in the past and we have lots of evidence of volcanic rocks.

The most recent volcanic activity was at the start of the opening of the North Atlantic Ocean around 60 million years ago. We have evidence of this in the Cooley Mountains in Co Louth and most famously at the Giants Causeway in Co Antrim.

Magma is extremely hot liquid and semi-liquid rock that sits under the surface of the Earth.

Plate tectonics is the idea that Earth's crust (where we are) is made up of large, moving pieces called plates. All of Earth’s land and water sit on these plates.