It's the first episode of Let's Dive In of 2021 and Julie and Phil are going to talk about star gazing and beyond as they tell us about telescopes. Julie is going to take it from here...

Phil and I are back in our studios answering your questions all about life, the universe and everything in it on our podcast #LetsDiveIn.

Our first question for 2021 comes from Sadhbh in Limerick, and she asked: How far can you see with a telescope?

Telescopes are bits of equipment that scientists use to collect information about the things you look at, and with a telescope, the information comes in the form of light. A bit like your eye, says Lana Salmon, a PhD researcher at University College Dublin, and our expert for this episode.

"So what we're trying to do with telescopes and satellites is to collect as much light from the universe as possible. And then we can analyse that light and try and figure out what is going on out there," says Lana.

There are lots of different kinds of light in the universe. The light your eye can see is called visible light, and it’s just one part of an entire spectrum of light. Scientists collect visible light from the universe, but it doesn’t give them the whole picture. They also use telescopes to collect radio waves, gamma rays, UV light, infrared light to get a better picture of the universe. And all these different kinds of light need different types of telescope to collect them.

An optical telescope (like those carried by pirates (ahoyyy!)) collect visible light, which is bounced off a mirror and then travels to your eye, where your brain organises the signals into a picture. These days, an optical telescope put the light onto a camera.

A radio telescope collects radio waves from things like Nebula, says Lana. These are regions in the universe filled with "gas and dust that will someday form planets and stars," says Lana. "So we’re looking at what our universe looked at very long ago when we look at these nebulae."

A radio telescope however, doesn’t look anything like a pirate telescope. It’s more like a bowl. Like a very, very big cereal bowl, Lana explains. Yum.

Now these bowl-like telescopes come in various sizes. One of the biggest freestanding radio telescopes/cereal bowl telescopes is in Cheshire in England. It’s called the Lovell Telescope and it’s 76m wide. 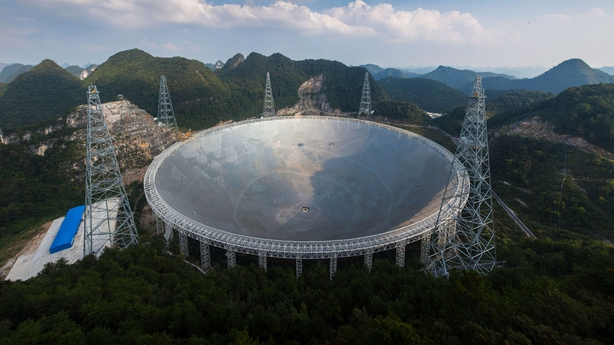 The biggest radio telescope in the world is in China. It’s called the 500 metre Aperture Spherical Radio Telescope or FAST. And the clue is in the title: it’s 500 metres wide. 500 metres! This telescope is different to the Lovell one in the UK because it has been built into, and is supported by, the ground.

Often these telescopes don’t work alone. To help scientists see further into space and to collect more light from space, these telescopes are put into arrays. By putting lots of telescopes into an array, and pointing them at the same piece of sky, they can get a better picture of what’s going on out there. Much more than just one telescope on it’s own.

Here’s a little demo to help you visualise this.

What you’ll need:
A piece of paper
A marker pen
A round glass

Here’s what you need to do and how it works:

Also, we’re in need of your jokes. Ours are clearly terrible (or mine are at least). So why not send us your best pirate-y or science-y jokes via #LetsDiveIn and we might include them in our show!

Make sure to subscribe and check out all the shows HERE

Don't forget to send in your questions to junior@rte.ie.