It's another great question for Julie and Phil to answer in the latest episode of Let's Dive In! Why is the sea salty? Well, here's Julie to tell us more...

Did someone shake some salt shakers over it? Or did someone fly a jet over the oceans to drop salt in it?

Turns out that's not what happened! So says our expert and oceanographer Nick Roden AKA "Nick up in Norway".

When we think of salt, we think of the stuff we put on our chips. Good old Sodium Chloride. Yes, that’s in the oceans, says Nick Up In Norway, but there are many other types of salts too.

It turns out, the seas weren’t always salty. Over millions of years, salts have been building up in the oceans. They come from the rocks and sands, mostly. Rocks in rivers, in the sea beds; it also comes from the shells of sea creatures that have broken down over centuries.

And how did it all get there? The main sources of water for the ocean are part of the hydrological cycle. Rain falls on to land and goes into ground water or into rivers. The water comes from the land and flows into rivers, which then bring all of that water into the seas. Which then evaporates again, forming clouds, which drop rain onto the land… and round it goes.

"But when water evaporates to form clouds, it actually leaves all those salts behind," says Nick Up In Norway. "So, this continual proves of evaporation, rainfall, river input, is all the time working to concentrate all those salts into the ocean." So after 500 million years "what we end up with is an ocean that is as salty as we see it today."

In our episode Phil shares an experiment that you can do at home to see the salt that the sea has (try saying that quickly three times!).

Here’s what you need:

Here’s what you need to do:

Leave the last 100ml of water with nothing dissolved in it

Put a little bit of each water in a separate saucer

Put the three saucers on the windowsill and watch what happens.

We know what will happen to the salty water – the water will evaporate and leave salts behind. This is what happens in the oceans. But what will happen with the sugary water? Take some pictures and tweet us your answers with the hashtag #LetsDiveIn!

There is a limit to how much salt the seas can hold, so it won’t keep getting saltier. Eventually, if there’s too much salt, the salt will no longer dissolve in the water. It will just exist as salt deposits.

So what does all this salt do to the oceans? Differences in salinity (the amount of salt in the water) and temperature, have an effect on the density of the water. So, some water can be "heavier" or more dense, than other water! So if you’ve got some really salty and some really cold sea water, that’s actually a lot heavier… "or heavier enough than what warm fresh water would be," says Nick Up In Norway.

What he’s saying is that if you mix cold, salty water with fresh warm water in a cup, the cold salty water would actually sink to the bottom of the cup! Isn’t that mad?!

What’s amazing is that this phenomenon causes currents to form in the oceans, which affects where we catch our fish, what the weather is like and ultimately our climate. And thus, our lives here on Earth! 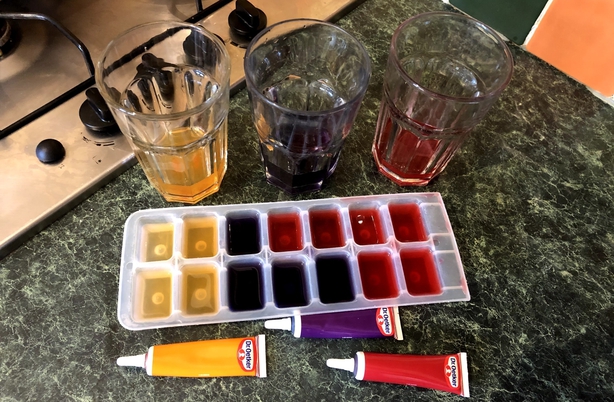 Nick Up In Norway shared a great little kitchen oceanography experiment with us that will help you visualise the moving water and currents.

A cup of warm (ish) water. Room temperature is fine

Here’s what you need to do:

Freeze it into ice cubes

Take one coloured ice cube and drop it into the cup of warm(ish) water.

Take a video and show us what happens!

Why not listen to the episode to find out more? Nick tells us about the Southern Oceans in Antarctica and the currents that form there because of the cold and warm water mixing.

Make sure to subscribe and check out all the shows HERE

And if you have any questions email them to junior@rte.ie.