Hub Lab is going outside today and Phil is explaining how a ball seems to curl in the air. In sport, we see it in loads of free kicks and only up the road in Ballymun Dean Rock shows us how it's done every year with the Dubs.

Even the the players who are really good at curling the ball might not know what the correct term is, but now you will - it's the Magnus Effect.

In this experiment we will...
1.  Explore air pressure and dynamics
2.  How to use physics in our everyday lives 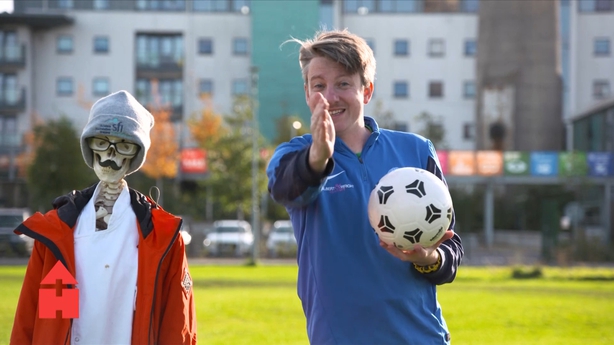 In this experiment we're looking at the beautiful game – the most popular sport in the world – football. It is estimated that about 3 billion people play or have played it meaning that it is one of the most accessible sports you can play. If you then think of our own Gaelic football then there's even more people playing sports with footballs.

Whether its GAA or soccer, we often we see players standing over a free kick running up and then curving the ball into the net or over the bar normally just out of the goalkeepers reach. But how do they do that? It all has to do with spin and something call the magnus effect!

How does it work?

When you kick a ball more on one side than the other (so not in the middle) it will spin as it travels through the air. So air is hitting the spinning ball as it travels.

This difference causes an area of high pressure and low pressure on opposite sides of the ball which in turn causes the ball to curl in the air!

You can catch up on After School Hub here: RTÉ Player