It's time for Wild Hub with Mélanie from Reptile Haven on After School Hub.

She has brought along two of her Crested Geckos Spikey Mike and Martha as well as Sunny and Spot who are Leopard Geckos to tell us all about these amazing and endangered little creatures. 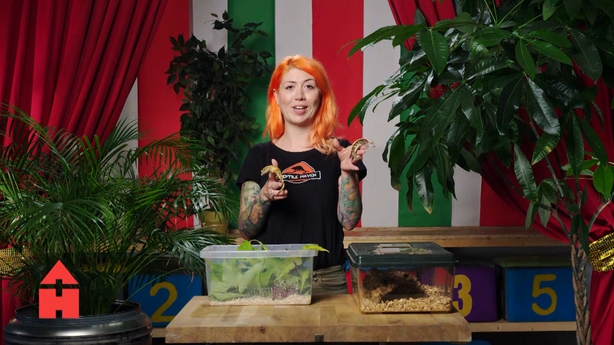 Crested geckos were thought extinct for over 100 years as nobody had seen them thanks to their amazing camouflage. They live in a place called New Caledonia, which is in the South Pacific.

You would not beat Spikey Mike in a staring contest as he has no eyelids! Instead of blinking he licks his eyes to keep them dry with his long tongue.
These geckos will 'drop' their tails if they think they are going to be eaten and hope the predator eats that to escape, but they can't regrow their tails unlike other geckos.

We also meet Sunny and Spot who are Leopard Geckos. One look at Spot and you will see exactly where she gets her name.

Keep an eye out for more Wild Hub coming soon and stay tuned to After School Hub every weekday from 3.20pm on RTÉ2 and catch up on the RTÉ Player.