This experiment is so good that once you start you might not be able to stop...We are learning about satellites, motion, and gravity with Phil of Science in this episode of the Hub Lab.

What will we expect to learn?
1. Explore how satellites and planets orbit one another.
2. Learn about centripetal force and how we experience it in our daily lives. 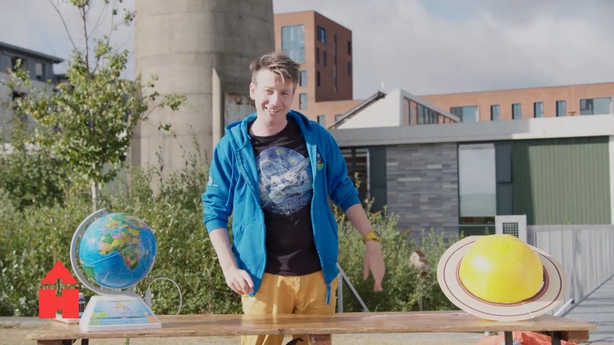 Why don't satellites fall to Earth?

You may think of a satellite as a type of machine that orbits Earth, taking pictures and collecting information. You'd be right there are thousands of satellites orbiting Earth but did you know that the Earth is a satellite too? It orbits the sun going around and around in much the same way. How do they keep doing that - and why don’t our satellites just fall out of the sky?

If you anything up into the air, the ball comes right back down. That’s because of gravity - the same force that holds us on Earth and keeps us all from floating away.

To get into orbit, satellites first have to launch on a rocket. That’s fast enough to overcome the strong pull of gravity and leave Earth’s atmosphere. Once the rocket reaches the right location above Earth, it lets go of the satellite.

The satellite uses the energy it picked up from the rocket to stay in motion. That motion is called momentum.

But how does the satellite stay in orbit? Wouldn’t it just fly off in a straight line out into space?

Not quite. You see, even when a satellite is thousands of miles away, Earth’s gravity is still tugging on it. That tug toward Earth -combined with the momentum from the rocket - causes the satellite to follow a circular path around Earth: an orbit.

When a satellite is in orbit, it has a perfect balance between its momentum and Earth’s gravity. Finding this balance is sort of tricky as it depends on how far you are away and how fast you’re going.
Guess you’re just going to have to get some practice in!

To run this whole experiment and get more get the full lesson plan...

Make sure to keep sending your own home experiments to After School Hub: Upload here

Tune in to Phil of Science's Hub Lab on After School Hub at 3.20pm on RTÉ2. You can also watch live or catch up on the full show thanks to RTÉ Player.