Today is Day of the Dead, it is not simply a Mexican version of Halloween, but something that connects people to their ancestors who have passed.

With thanks to our friends at the Mexican Embassy in Dublin, Ambassador Miguel Malfavon tells us more about this very important day and what he will be doing to mark the occasion.

What is Day of the Dead?
Hundreds of years ago in Mexico the native peoples who lived there (Aztecs, Toltecs, Olmecs, Mayas) had a celebration for the dead.
They believed that the spirits of their dead relatives returned to earth once a year to visit them. For these pre-Hispanic cultures, death was a natural phase in life's long continuum.
The dead were still members of the community, kept alive in memory and spirit, and during Día de los Muertos, they temporarily returned to Earth.
The goddess Mictecacihuatl (pronounce something like Meektecaciwatl) led the celebration. She was known as the Lady of the Dead.

In the 1500s Spanish conquerors arrived in Mexico. They converted many people to their religion, Roman Catholicism, where the holidays of All Saints’ Day and All Souls’ Day are celebrated on 1 and 2 November. These festivals also remember people who have died. The Spanish therefore combined the native rites with their religious festivals.

The Day of the Dead, is not a Mexican version of Halloween. It is not a sad or scary tradition. Though related, the two annual events differ greatly.
Whereas Halloween is a dark night of terror and mischief, the Day of the Dead is an explosion of colour and life. Sure, the theme is death, but the point is to demonstrate love and respect for deceased family members. It emphasises remembrance of past lives and expresses celebration of the continuity of life.

How important is it to Mexicans?
The Day of the Dead is an extremely social holiday that spills into the streets and public squares at all hours of the day and night. It is one of Mexico’s most important religious holidays. It is celebrated passionately throughout Mexico, and especially so in smaller provincial towns and cities. Although many opt to stay at home, holding graveside vigils on the night is still common in many Mexican communities and is most definitely one of this celebration’s most iconic ritual. Traditionally, 1 November honours deceased children and 2 November honours adults who passed away.

The centrepiece of the celebration is an altar, or ofrenda, built in private homes and cemeteries. These aren’t altars for worshipping; rather, they’re meant to welcome spirits back to the realm of the living.
As such, they’re loaded with offerings - water to quench thirst after the long journey, food, family photos, and a candle for each dead relative. If one of the spirits is a child, you might find small toys on the altar. Marigolds are the main flowers used to decorate the altar. 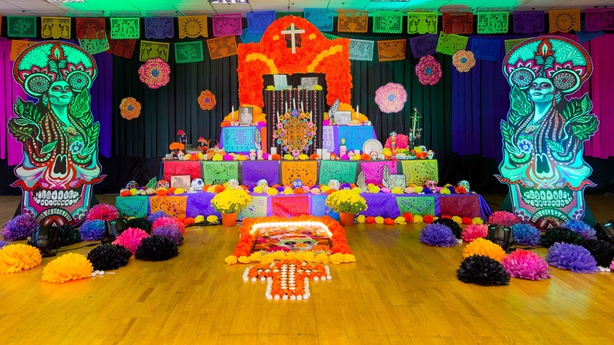 Scattered from altar to gravesite, marigold petals guide wandering souls back to their place of rest. The smoke from copal incense, made from tree resin, transmits praise and prayers and purifies the area around the altar.
Other common offerings are Pan de muerto, or bread of the dead, a typical semi-sweet bread infused with natural citrus fruit flavours, often featuring anise seeds and decorated with bones and skulls made from dough.
It’s traditionally taken with hot chocolate that has been mixed with cinnamon and whisked, a pairing that creates a warming blend for enjoyment on a chilly November evening. Sugar or chocolate skulls are also part of an art tradition. Pressed in molds and decorated with crystalline colours, they come in all sizes and levels of complexity, but more than anything they are delicious!

How do children take part and families celebrate?
Skeletons are scary, right? Not if you're celebrating Día de los Muertos. The skeletons are posed doing all sorts of wacky things, such as playing guitar, taking a bath, or making tortillas. Apparently people aren't the only ones who get to have fun on Day of the Dead!

Dressing up as skeletons is part of the fun. People of all ages have their faces artfully painted to resemble skulls, and, mimicking the "calacas" (skeletons). The most famous one is known as "Catrina" representing the Lady of the Dead, an elegant skeleton dressed up with fancy costumes. They hold parades and parties, sing and dance, and make offerings to lost loved ones. 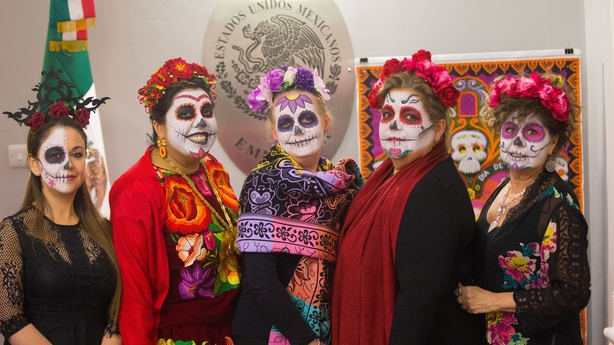 Since skulls are somewhat of an unofficial symbol of the holiday, competitions for the most elaborate "calavera de azúcar" (sugar skull) created are very popular among children. These skulls are not meant to be scary, like the ones you see on Halloween. If you look closely at the Day of the Dead skulls, you will notice they have smiles. This is because the memories of those that are gone are happy memories.

What will the Ambassador do?
As many other Mexicans around the world, we will build an altar at home to honour our dead relatives. We will decorate the altar with candles, flowers, food, and photos of the relatives.

Normally the Embassy would organise a workshop for children on how to make "Calaveras de azúcar" (sugar skulls), and to make drawings of "calacas" (skeletons). On this occasion, we would bring Pan de muerto and hot chocolate.
However, this year we have to skip this tradition because of Covid restrictions.

If you would like to know more about this Mexican tradition, you should watch the 2017 Disney Pixar movie Coco, that introduced the holiday and some of its traditions to kids.