This demo from the Hub Lab today is really great for this time of year because dry ice is used so much in scary movies. It's used to make the fake smoke that you see coming from the haunted house or the graveyard.

In this demonstration we will...
1. Explore the differences between solids, liquids and gases and how materials change into different states.
2. Learn about dry ice and a new term sublimation.

Unfortunately, because of the materials used in this Hub Lab, this is not one fro you to try at home, but it's great fun to learn how they make some movie magic. 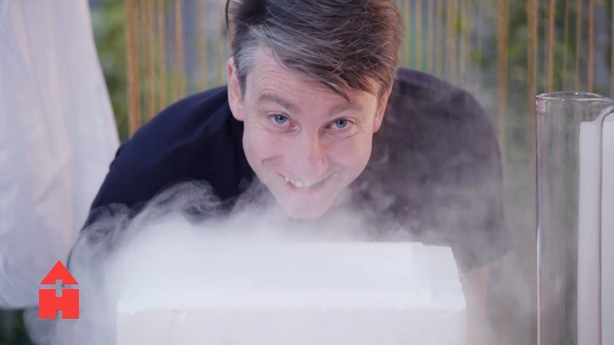 What is Dry Ice?
This experiment is not really available for everyone to do. This is more of a demonstration for a teacher or responsible adult to do while people watch. In fairness though – it is pretty cool to watch!

Dry ice is frozen carbon dioxide. It has a surface temperature of about -79 degrees Celsius. Dry ice does something unusual: it sublimes. This means that as it breaks down, it turns directly into carbon dioxide gas rather than a liquid.
So, it goes straight to a gas from a solid unlike normal water ice that goes from solid to liquid to gas. The super-cold temperature and the sublimation feature make dry ice great for refrigeration. For example, if you want to send something frozen across the country, you can pack it in dry ice.

It will be frozen when it reaches its destination, and there will be no messy liquid left over like you would have with normal ice…. Why? Because it doesn't become a liquid!

Make sure to keep sending your own home experiments to After School Hub: Upload here

Tune in to Phil of Science's Hub Lab on After School Hub at 3.20pm on RTÉ2. You can also watch live or catch up on the full show thanks to RTÉ Player.