Orbital debris are all man-made objects in orbit about the Earth which no longer serve a useful purpose and this week it forced the International Space Station to move to avoid a potential collision course.

So, it's a great time to learn more about what is up there. Although we don't see space debris in the sky, beyond the clouds and further than the eye can see, it enters low Earth orbit (LEO).

LEO is an orbital space junk yard. There are millions of pieces of space junk flying in LEO. Most orbital debris comprises human-generated objects, such as pieces of space craft, tiny flecks of paint from a spacecraft, parts of rockets, satellites that are no longer working, or explosions of objects in orbit flying around in space at high speeds.

Most "space junk" is moving very fast and can reach speeds of 18,000 miles per hour, almost seven times faster than a bullet. Due to the rate of speed and volume of debris in LEO, current and future space-based services, explorations, and operations pose a safety risk to people and property in space and on Earth.

To help us understand more about its origins let's look at some questions and answers below with thanks to NASA.

What are examples of orbital debris?
Derelict spacecraft and upper stages of launch vehicles, carriers for multiple payloads, debris intentionally released during spacecraft separation from its launch vehicle or during mission operations, debris created as a result of spacecraft or upper stage explosions or collisions, solid rocket motor effluents, and tiny flecks of paint released by thermal stress or small particle impacts.

How many orbital debris are currently in Earth orbit?
More than 21,000 orbital debris larger than ten cm are known to exist. The estimated population of particles between one and ten cm in diameter is approximately 500,000. The number of particles smaller than one cm exceeds 100 million.

What is the principal source of large orbital debris?
Satellite explosions and collisions. Prior to 2007, the principal source of debris was from explosions of old launch vehicle upper stages left in orbit with stored energy sources, eg, residual propellants and high pressure fluids.
The intentional destruction of the Fengyun-1C weather satellite by China in 2007 and the accidental collision of American and Russian communications satellites in 2009 greatly increased the number of large debris in orbit and now represent one-third of all cataloged orbital debris.

Are orbital debris uniformly distributed about the Earth?
Most orbital debris reside within 2,000km of the Earth's surface. Within this volume, the amount of debris varies significantly with altitude. The greatest concentrations of debris are found near 750-800km.

How fast are orbital debris traveling?
In low Earth orbit (below 2,000 km), orbital debris circle the Earth at speeds of 7/8 km/s. However, the average impact speed of orbital debris with another space object will be approximately 10 km/s. Consequently, collisions with even a small piece of debris will involve considerable energy.

Does the International Space Station have to dodge orbital debris?
The US Space Surveillance Network regularly examines the trajectories of orbital debris to identify possible close encounters. If another object is projected to come within a few kilometers of the International Space Station (ISS), the ISS will normally maneuver away from the object if the chance of a collision exceeds one in 10,000. This occurs infrequently, about once a year on average. 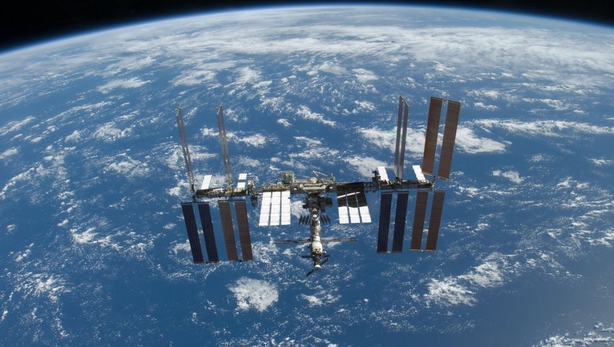 How is the International Space Station protected against orbital debris?
The ISS is the most heavily shielded spacecraft ever flown. Critical components, e.g., habitable compartments and high pressure tanks, will normally be able to withstand the impact of debris as large as one cm in diameter. The risk of a critical ISS component being struck by debris one to ten cm in diameter is slight and ways to reduce this risk are being investigated.

How did the Mir space station fare during its 15-year stay in Earth orbit?
Photographs of Mir's exterior show large numbers of impacts from small orbital debris and meteoroids. The most significant damage was to the large, fragile solar arrays that could not be protected from small particles. Orbital debris caused no loss of mission or capability on Mir.