Did you know over 70% of the Earth is covered by the ocean? Oceans are vital to us humans as most of the oxygen we breath comes from tiny ocean plants called phytoplankton that live near the water's surface.

The Ocean also regulates land temperatures, acting as a heater in Winter and an air conditioner in Summer! These are just some of the reasons why it is important we keep them healthy.

Our oceans are becoming increasingly littered from human activities and this is having a negative effect on marine life. Approximately 10 million tonnes of litter end up in the world’s oceans and seas each year - that’s the same weight as 10 million Rhinos!

The litter that we find on beaches is only 15% of the total amount of marine litter. Another 15% is floating in the water and a massive 70% lays on the seabed making it very hard to clean up.

Impacts of marine litter…
There are many negative outcomes to both marine animals and humans as a result of rubbish building up in the sea, some of which include:

Impacts to Marine Life
Entanglement and Ingestion - approximately 100,000 marine mammals die every year as a result.
Ghost fishing - lost or abandoned fishing gear that continues to catch fish.
Spread of invasive species as they attach to marine litter and float in currents.

CHECK OUT THE FULL INFOGRAPHIC HERE

Where does marine litter come from?

Marine litter occurs when items have been discarded or accidentally lost on shore or at sea. It includes materials that are carried out to sea from land, rivers, wind and sewerage systems.

Did you know that some of this litter comes from flushing unsuitable items like cotton buds and wet wipes that contain plastic down the toilet?

Even some toothpastes have micro plastics that wash down the sink and eventually enter the sea. Check out our infographic below which highlights many ways in which litter enters our oceans. 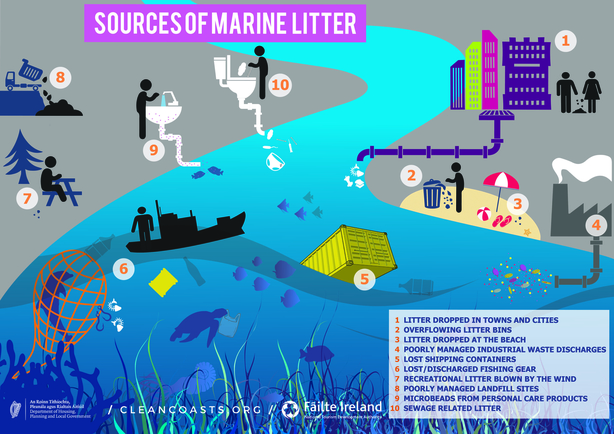 You might be surprised by some of these plastic facts:

Plastics make up over 70% of all marine litter in the ocean!
Over the last ten years we have produced more plastic than during the whole of the last century.
Around 1.5 million plastic bottles are purchased in Ireland each week
The average time for a plastic bottle to break down is at least 450 years. Sadly, it will break down to microplastics and never fully disappear.

On our current path, by 2050 the ocean is expected to contain more plastics than fish by weight.
Our plastic waste has created a gigantic "plastic soup" in the Pacific of up to 15 million square kilometres – almost the size of Russia.
Over the next 10 years, the plastic soup could double in size. At this speed, the plastic grows as much as 8 football fields every second.

What can you do to help?

It's not all bad news, there are a number of actions you can take to help tackle the amount of plastics that end up in our oceans and our shores.
1. Share some of these facts with your friends and family – knowledge is key!
2. Do a beach clean. This doesn’t have to take long and can have a big impact on your local beach – check out our 2 minute beach clean campaign for more details or log onto cleancoasts.org to find your local group.
3. Buy a reusable water bottle and take it with you wherever you go.
4. Say no to single use plastic – try buy products that do not contain plastic packaging.
5. Rethink, Reduce, Reuse, Recycle!

The Clean Coasts programme is part of the An Taisce Environmental Education Unit.