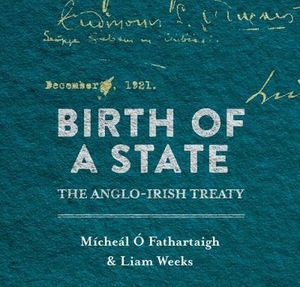 If the Treaty had been rejected, there might have been a very different sort of civil war in 1922. Liam Weeks and Mícheál Ó Fathartaigh explain the importance of the debate in the second Dáil that led to its acceptance

The contemporary Irish political party system owes its origins to a split within the once omnipotent Sinn Féin, a division that was a product of the debate in the second Dáil over the acceptance of the terms of the Anglo-Irish Treaty of 1921.

This was probably the most important debate in the history of our parliament. Had the Treaty been rejected, a different type of civil war might have ensued on the island, not between pro- and anti-Treatyites, but a more sectarian, and perhaps more bloody, conflict between nationalist and unionist, Catholic and Protestant. Such hypothesising is more the realm of historical fiction, but, regardless of the outcome, the Treaty, and the debates over its ratification, was a critical juncture in modern Irish history.

The Dáil that debated the Treaty comprised TDs elected in the 1921 elections to the newly established Houses of Commons in Northern Ireland and 'Southern Ireland'. No polling took place for the latter body as all 128 candidates were returned unopposed. They comprised 124 from Sinn Féin and four independent unionists from the University of Dublin (Trinity College).

The unelected nature of the Dáil is perhaps its most striking feature, and contributed to the election of a group that might not have been as representative of the Irish population as could have resulted from competitive elections. It was certainly more radical, with forty-seven per cent of TDs ultimately opposing the Treaty in the fateful vote on 7 January; in contrast, 328 public bodies came out in favour, with just five against the Treaty. Likewise, in the June 1922 Dáil election, the first after the Treaty debates, seventy-eight per cent of the electorate voted for pro-Treaty candidates.

The Dáil first met to discuss the Treaty on 14 December 1921, the first of fifteen days of debate, including a break for the Christmas period. It convened in the council chambers of University College Dublin on Earlsfort Terrace (now the National Concert Hall) because the Mansion House, which the Dáil had been using, was booked for a Christmas show.

There were twelve public sessions of parliament, as well as three private sessions on 15-17 December, and the morning of 6 January. The record of these private debates was not released to the public until fifty years later, hiding from scrutiny Document No. 2. This was de Valera’s alternative to the Treaty, which proposed the complex concept of ‘external association’, but ultimately differed little in substance from the version he opposed so vehemently.

In an era of slower communications, the purpose of the debates for many TDs was to inform themselves of the detail of the Treaty, which had been signed just a week previously. Many initially chose to listen rather than talk.

While in part a product of a sense of deferment to the party leadership, this also reflected the inexperienced and unelected nature of the TDs, many of whom had been hand-picked by Michael Collins and Harry Boland.

With few of the TDs being accustomed to politicking, let alone parliamentary debate, it is not surprising that the quality of the proceedings has come in for some criticism, with Jason Knirck in Imagining Ireland’s Independence (2006) claiming that ‘speeches – with few notable exceptions – meandered through bouts of self-justification, necromancy, martial machismo and republican histrionics’.

The main contributors were, not surprisingly, those in the Sinn Féin hierarchy. Of the 440,000 words spoken during the debates, 40,000 were spoken by de Valera, almost twice that of the two other main contributors, Arthur Griffith (22,000 words) and Collins (20,000).

The most commonly used words, aside from conjunctions and prepositions, were ‘Treaty’ (1,704 mentions), ‘people’ (1,404), ‘Ireland’ (1,247), ‘Irish’ (1,112), ‘country’ (634), ‘republic’ (604), and ‘British’ (593). Nationalism seemed to take precedence over fiscal interest, as ‘economic’/‘economical’/‘economies’ were mentioned just fifty-two times, with there being little discussion of the economic impact both of partition and of the proposed departure from the Union.

At the same time, there was little discussion of a key consequence of the Treaty – its confirmation of the partition of the island, as established by the Government of Ireland Act, 1920. Just nine of the 338 pages of public debates discussed partition. There was even less discussion of this in the private debates (three of 183 pages).

Related to this, Ulster was mentioned only seventy-nine times, with unionists referred to even less, just thirty-five times. A quantitative analysis by these authors of the text that was uttered in the debate reveals little of the fatal split that was to emerge, as there was a lot of clustering amongst TDs, in part owing to a combination of confusion over, and opposition to, the key terms of the Treaty.

It is impossible to state definitively what caused the split within Sinn Féin over the Treaty. The fault line, in terms of who voted for it and who voted against, could not have been predicted at the time. Moreover, looked at retrospectively, the breakdown does not follow, either.

As Eunan O’Halpin and Mary Staines have highlighted, no simplistic consensus can be imposed on the split. What can be stated definitively is that it was not, though, as has been asserted widely and assumed popularly, partition, class or ‘extreme’ women that divided the two sides.

If an extra-terrestrial landed on Earth and, for whatever reason, was greeted with a potted history of Ireland, they would conclude, presumably, that the Treaty split was caused by partition: the fifty-seven Sinn Féin TDs who voted against it simply could not bear to lose the six counties and so refused to accept the Treaty.

Following on from the above, E.T. would be wrong, though. In 1922, there were five Dáil constituencies situated along the border with the new Northern Ireland. Twenty-one Sinn Féin TDs represented them and of all the Sinn Féin TDs they could be expected to oppose partition. Yet only one, Seán MacEntee, in the Treaty debates cited partition as his reason for opposing the Treaty: ‘I am opposed to this Treaty because it gives away our allegiance and perpetuates partition.’

Furthermore, only five of the twenty one voted against the Treaty. That over three-quarters of the border TDs voted for the Treaty indicates convincingly that partition was not the issue that caused the split. Instead, the Sinn Féin TDs saw it as a separate issue. It was (as we know, too) an intractable issue and could be, and would have to be, dealt with at a later date.

What were the roots of the split?

A century on from the Treaty split, class-based politics, and the configurations of left and right, do appear to be in the ascendance in Dáil Éireann. However, 100 years ago class consciousness did not cause the Treaty split.

The fault line, as Brian Hanley has set out in The Treaty: Debating and Establishing the Irish State, did not reflect any fundamental or latent divisions within Sinn Féin over socio-economic considerations. Most of the members of the Sinn Féin parliamentary party were of a congruent class cohort. They tended to come from a relatively privileged background, which had seen a majority of them (seventy-five), educated to secondary level at least. Fianna Fáil and Fine Gael would become associated with class interests but this was later on.

Finally, old perceptions about the six female TDs who voted against the Treaty as inherently extreme and implacably irreconcilable elements within the Dáil are, as Sinéad McCoole and Mary McAuliffe have stressed, deeply anachronistic (and unsurprisingly misogynistic). No harpies in the second Dáil caused the Treaty split.

Over the Christmas recess a majority of the constituents of the Sinn Féin TDs made it clear to them that they wanted the Treaty ratified. As Mel Farrell has shown in The Treaty: Debating and Establishing the Irish State, this resulted in a slew of conversions to the pro-Treaty stance. Then, as now, in Irish democracy many politicians took a course that the people, rather than they, wanted.

‘If a division had been taken before Christmas I say, undoubtedly, that I would have voted against the Treaty. That is my position. I returned to my constituency at Christmas and I went there to the people … and I consulted them about this question and I must say that unanimously they said to me that there was no alternative but to accept the Treaty.’

As in all political parties, in Sinn Féin the leadership wielded an extraordinary influence. De Valera was the official leader but there was another lodestar, Michael Collins. There is no doubt that the gravitational pull of both, in two diametrically different directions, contributed to the cleavage.

The split was just that, a split. This is not a metaphysical point, rather it is simply that those sixty-four Sinn Féin TDs who voted for the Treaty did not, by and large, see it as an ideal settlement any more than those fifty-seven that voted against it. Both sides voted for and against the Treaty based on random choice and personal whim as much as conviction and reason.

Dr Liam Weeks (University College Cork) and Dr Mícheál Ó Fathartaigh (Dublin Business School) are co-authors of the recently published 'Birth of a State: The Anglo-Irish Treaty' (Irish Academic Press, 2021), and co-editors of 'The Treaty: Debating and Establishing the ...