It was the first serious attempt to alleviate the suffering of the Famine. But did it make a serious difference? Helene O'Keeffe on the Temporary Relief Commission

From mid-September 1845 Sir Robert Peel received a deluge of daily correspondence about the state of the potato crop in Ireland. As Conservative Prime Minister since 1841, it was his responsibility to decide the best course of action in the face of the impending crisis.

Perhaps best known for establishing the Metropolitan Police Force - the 'peelers’- in 1829, Peel was a skilled politician with significant experience in dealing with Irish affairs. At just twenty-one in 1809, the Lancashire-born Conservative was elected MP for Cashel and in 1812 he began a six-year period as Chief Secretary for Ireland.

When reports from Ireland in September 1845 suggested widespread failure of the potato crop, Peel set about devising a package of relief measures informed by his previous experience in Ireland, contemporary politics and a personal ambition to reform Irish society and economy.

The Freeman’s Journal of 4 November 1845 criticised the seeming inertia of the government in the face of an impending crisis. The journalistic outrage was prompted by the cold reception given to a delegation of the Mansion House Committee at the Viceregal Lodge the day before.

Comprising some the country’s most important establishment figures, the Mansion House Committee, compiled a list of possible actions to mitigate the effects of the potato blight, including the cessation of distilling and brewing and an embargo on food exports.

During a brief audience with the Lord Lieutenant, Lord Heytesbury, the delegation received assurance that their proposals would be sent to cabinet and ‘maturely weighed’. It was impossible, he added, to decide on the ‘most proper measures’ until the harvest was more advanced and the government furnished with ‘a fuller picture of the whole extent of the evil’.

Lord Heytesbury’s perfunctory response belied the level of research and planning that went into the official reaction to the crisis. On 16 September 1845, just weeks after the first appearance of the blight, the Irish constabulary was directed ‘to make full and immediate inquiries’ into the state of the crop in their districts.

The police reports were supplemented by the Prime Minister’s daily correspondence with the Irish Executive which, in turn, received regular updates from members of the Coast Guard and Poor Law Board. To counter what he considered the ‘tendency to exaggeration and inaccuracy in Irish reports’, Peel appointed a scientific commission in October to investigate the cause and extent of the blight.

While the information from all sources was alarming, there was no reason to believe in late 1845 that this would be any different to previous, temporary food shortages. And so, armed with the findings of his ‘men of science’, Peel devised a package of traditional short-term relief measures combined with his longer-term goal of repealing the Corn Laws.

Enacted in 1815 to protect domestic agriculture, the Corn Laws placed tariffs on grain imported from other countries. Peel, a late convert to the idea of free trade, seized the opportunity to use an apparently temporary food crisis as the catalyst for permanently repealing the Corn Laws.

Despite the steadfast opposition from protectionists within his own cabinet, he suggested that the crisis in Ireland was the result of a paucity of cheap grain rather than the more immediate failure of the potato harvest. A divided cabinet led to Peel’s strategic resignation on 6 December.

When Lord John Russell failed to form a Whig government, Peel reclaimed the mantle of leadership to oversee the early implementation of his relief measures. While repeal was finally achieved in the summer of 1846, its implementation in agonisingly slow stages meant that it was too late to have any impact on food shortages in Ireland.

At an emergency cabinet meeting on 31 October 1845, the Prime Minister presented his proposals for mitigating the crisis in Ireland. These would run parallel but separately to the indoor relief provided by workhouses under the Irish Poor Law of 1838.

His first action was to authorise the Lord Lieutenant to establish a relief commission. Dubbed the 'Starvation Commission' by political opponents, its brief was to oversee relief efforts and support the activities of local relief committees.

Legislation was passed in January 1846 to finance public works under the jurisdiction of the Board of Works, which would employ those identified as eligible for relief by local relief committees.

The works, funded in equal parts by government grants and local subscriptions, were intended to provide employment for the hungry in the short term and contribute to Ireland’s economic development in the long term.

The arrival of Indian corn

In a less conventional move, Peel arranged for the secret purchase of £100,000 of maize (Indian corn) from North America, a cheap substitute for the potato. The clandestine nature of the transaction was essential because news of the large-scale purchase might stifle private enterprise and disincentivise local relief efforts.

The first shipments arrived in Cork in early February 1846 but, in order to control food prices, it would be stored in large depots until ‘the hungry months’ of May and June. Increasing levels of distress in the spring, however, forced that the authorities to open the first depots at Cork, Clonmel and Longford in March.

The Treasury’s fastidious permanent secretary Charles Trevelyan assumed a central role in ensuring strict budgeting around the distribution of relief funds. In line with prevailing political doctrine, his guiding principles were to limit the levels of state intervention and, as he wrote in January 1846, to ensure that landlords and rate payers shouldered their ‘legal and moral’ responsibility for affording due relief to the destitute poor.

The Temporary Relief Commission met for the first time on 20 November 1845 under the chairmanship of County Monaghan landowner and under-secretary at Dublin Castle, Edward Lucas. Its other members represented the various government departments in Ireland responsible for administering relief.

In order to predict the levels of relief required, the commission’s first task was to assess the scale and impact of the potato disease. It solicited reports from official sources in all parts of Ireland, and received letters from landowners, resident magistrates and local clergy providing estimates of loss and dire predictions.

This wealth of correspondence constitutes part of the Relief Commission Papers housed in the National Archives of Ireland - one of the most valuable sources about the state of Ireland between November 1845 and August 1846.

From February 1846 the Commission began to establish its network of corn depots and in the same month issued directions for the establishment of local relief committees. Financed by local subscriptions, these voluntary bodies would comprise local dignitaries, public officials and clergymen.

Their remit was to encourage employment and organise the purchase and distribution of Indian corn. Once sufficient funds had been collected, the relief committees could apply for a grant in proportion to the funds raised locally.

As recipients of government grants, however, they were bound by the regulations issued by the Treasury. These stipulated that committees could only purchase food from the depots once food prices began rising in their locality. It was to be sold at cost price and only distributed freely when the local workhouse was full, and even then, only to the unemployable.

Almost 700 committees were established in the spring and summer of 1846, primarily in the south and west of the country. The Tralee relief committee, for example, was convened in April by the Earl of Kenmare. At a meeting on 14 April under the chairmanship of Sir William Denny, it resolved to meet once a week in the courthouse and to open a subscription list for the town.

In one of the many missives from Dublin Castle, local committees were instructed to publish these lists in order to discourage default by recalcitrant landowners. The Tralee committee also decided to make an application to the government for £500 worth of Indian corn and, according to the Kerry Evening Post, to purchase a further ten tons of meal from private merchants.

Complying with the directions of the central relief administration was not always so easy. Writing in frustration from Westport, County Mayo on 27 April, Fr Patrick McManus informed the commission that,

This was contrary to the commission’s instructions but ‘what else could we have done’, he asked, they could ‘not to suffer the people to starve’. The commission’s own chairman, Edward Lucas, was critical of the Treasury’s decision to delay the issue of instructions until February, by which time there was considerable distress in some parts of the country.

He also criticised various aspects of the government’s relief policy and disapproved of the level of interference by Trevelyan in the day-to-day administration of the Commission. When the Commission was restructured in February 1846, Lucas was promptly replaced by Sir Randolph Routh of the commissariat department of the Army.

As chairman, Routh worked hard to counter the initial resistance to Indian corn, derisively dubbed ‘Peel’s brimstone’ because of its sulphurous yellow colour. The hard, unpalatable grain was far removed from the diet of potatoes to which the rural poor had become accustomed and, if not boiled for long enough, the alien foodstuff could cause painful indigestion and, in some cases, dysentery.

Routh become a public advocate of its use and benefits, overseeing the publication of thousands of instructional handbills and a popular pamphlet with instructions for its preparation. The resistance, however, was short-lived. In the words of the unfortunately-named commissary general, Sir Edward Pine-Coffin, in a letter to Trevelyan on 30 March 1846, the Indian meal was ‘much too good a thing to be long rejected by starving people’.

In practice, the Relief Commission was hindered by internal disagreements and Trevelyan’s rigorous oversight and the public works schemes were beset by bureaucratic delays and inefficiencies. Nonetheless, the relief measures devised by Peel succeeded in averting many deaths.

As Isaac Butt pronounced in the Dublin University Magazine in April 1847, ‘the timely precaution [of importing Indian corn] and the subsequent judicious distribution of this store had the effect of bringing the people through the winter that closed the year 1845.’

John Russell’s Whig government replaced the Tory administration on 29 June 1846, on the cusp of a second, more devastating crop failure. As the crisis deepened, the role of the Relief Commission was reduced in favour of a revamped public work scheme and the Poor Law system. The Commission was finally disbanded in August 1846. 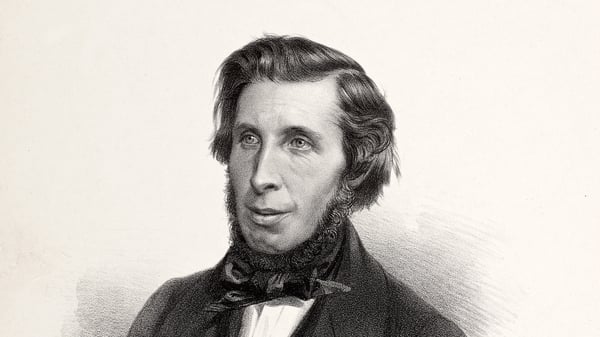 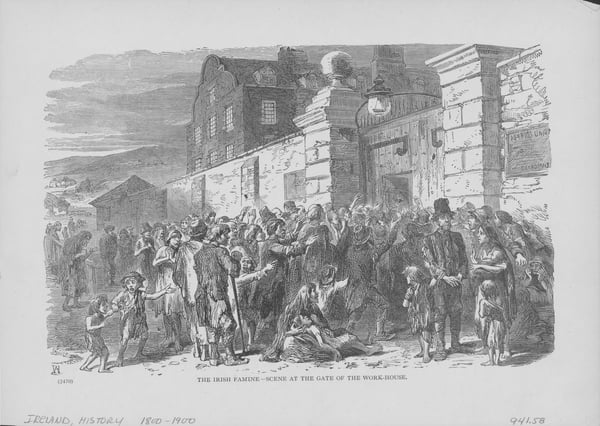 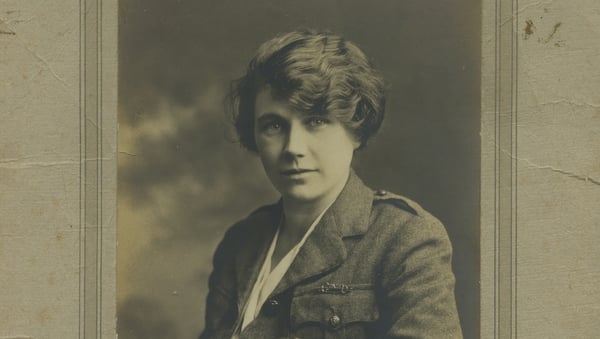 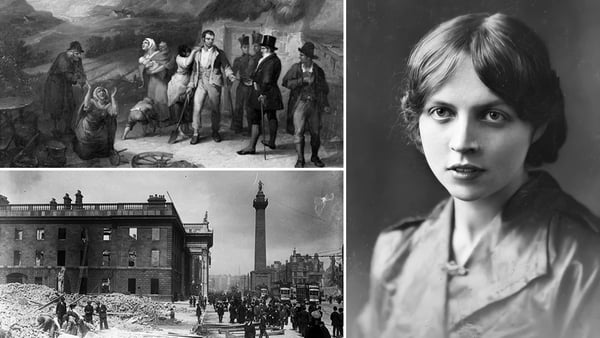