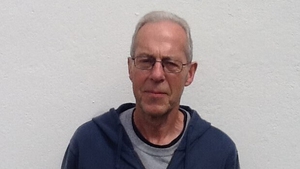 The vast majority of deaths during the Famine were caused by contagious diseases. What were they - and how did they take hold? Laurence M. Geary explains

Between 1845 and 1852 starvation and famine-related diseases were responsible for more than 1 million excess deaths in Ireland, the vast majority attributable to contagious or communicable diseases that raged epidemically and with great malignity, particularly fever, dysentery, diarrhoea, tuberculosis, smallpox, and measles among children.

The coincidental appearance of Asiatic cholera in 1848-49 compounded the physical and mental suffering of the beleaguered population and increased overall mortality. The impact of the prevailing infections was intensified by their occurrence at a time when disease causation and prevention were not properly understood, and before the scientific discoveries in medicine that emerged in the second half of the nineteenth century.

Fever was the most lethal of the Famine's diseases. In the pre-scientific medical age in which the Famine occurred, fever was a generic term that embraced two distinct but symptomatically related infections, typhus fever and relapsing fever, each of which is highly contagious.

The epidemiology of the two diseases is very similar. Each is caused by micro-organisms, which are transmitted from one host to another by lice, whose sole food is human blood. Lice exist at a specific body temperature and when this rises or falls, as in the case of feverish or dead victims, lice leave for new hosts with normal temperatures, and in this way fever spreads.

Typhus fever symptoms include high temperature, prostration, mental confusion, body aches, and a dark rash that covers the body from head to foot. In cases that are not going to recover, death usually occurs from heart failure about the fourteenth day.

The features of relapsing fever are high temperature, generalised aches and pains, nausea, vomiting, nose bleeding, and jaundice. In cases with a favourable outcome, the fever ends after five or six days with a sharp crisis attended by profuse sweating and exhaustion.

This drop in body temperature was colloquially known as getting the cool. The symptoms return after about a week and there may be several such relapses before the disease runs its course.

During the Famine the condition was variously known as 'famine fever', 'starvation fever', 'the fever', 'relapse fever of 1847', 'five days' fever', and 'road fever', because it was said to have originated with the large numbers of displaced or dispossessed people on the public roads.

Relapsing fever was the prevalent disease among the poor, while the higher social classes tended to contract the more deadly typhus fever, particularly clergymen, medical practitioners, members of relief committees, and poor law administrators, individuals who had greater exposure to infection because of their contact with the starving and diseased peasantry.

Why did famine lead to fever?

The relationship between famine and fever is complex, but there is no direct nutritional connection. It was the social conditions and social dislocation arising from famine – neglect of personal and domestic hygiene; overcrowding in homes and public institutions; increased migration, mendicancy, and vagrancy, among other factors – rather than the shortage of food itself that was responsible for the generation and diffusion of fever. 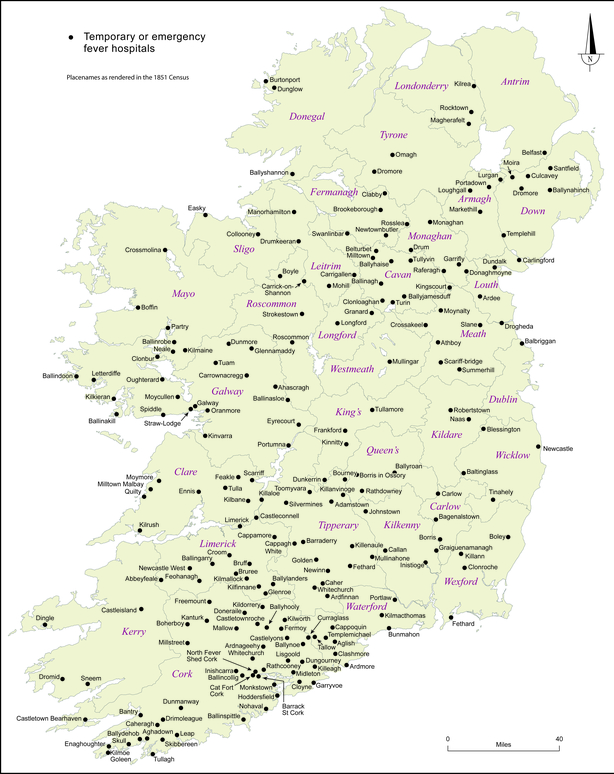 This map from the Atlas of the Great Irish Famine shows the distribution of temporary fever hospitals during the Famine.

Noticeable too is the number of temporary fever hospitals that had to be created in Clare and peninsular southwest Munster. Similarly, their dense distribution in mid-Ulster and the Ulster/Leinster/Connacht borderlands reflects high stress levels, although it would appear that the eastern half of this zone was more successful in curtailing deaths due to fever.

Almost devoid of pre-Famine fever hospitals, one of the most striking features of this map is the emergence of County Galway as a major zone of temporary fever hospitals to meet the severe conditions existing there.

The relative sparsity of such hospitals in County Mayo is somewhat surprising. Not so their distribution in both north Ulster and most of mid-Leinster, two provincial regions less deeply affected by the horrors of famine and fever.

Famine in Ireland invariably set a migratory chain in motion, and increased itinerancy disseminated fever throughout the country. Lice, the vectors of fever, found new and unresisting hosts at food depots and government sponsored relief works, at religious and social gatherings, and in prisons, workhouses, and other relief and medical institutions.

Bacillary dysentery and diarrhoea were the most frequent and fatal complications of fever. The former is spread by flies, by direct contact, or by water polluted by faeces infected with the bacillus. Symptoms vary from a mild attack of diarrhoea to an acute fulminating infection.

The diarrhoea may last from a few days to a fortnight, depending on the severity of the episode. There may also be nausea, and aching pain in the limbs, while there is always fever. An attack cannot develop except through the agency of the specific bacillus, but anything that causes an intestinal upset, such as unsuitable food, predisposes to infection.

Chronic dysentery, or 'starvation dysentery' as it was sometimes called, was attributed to the foods that were substituted for the blighted potatoes in the diet of the peasantry, particularly the immoderate consumption of raw or partially cooked Indian meal by famishing people who had neither the knowledge, fuel, or restraint to prepare it properly.

Dysentery was commonly known as 'the bloody flux', and during the Famine this vile disease was characterised by seemingly uncontrollable malodorous evacuations of blood and mucus, which, according to one doctor who encountered the condition frequently in his west Cork medical practice, continued until infected individuals wasted to skeletons.

Starvation, a process captured in the Great Famine’s enduring image, the skeleton, was responsible for an undetermined, though relatively small, number of deaths in the late 1840s. The skeletal appearance of the starving, the haggard wan and shrunken appearance of face, body and limbs was a powerful and affecting sight, and shocked medical practitioners and others who encountered and recorded this degradation of the human body and spirit.

The antithesis of physical wasting is the bloated body, another powerful famine image. This starvation-related condition, which is known as oedema or dropsy, is caused by an abnormal accumulation of fluid beneath the skin, or in one or more of the body’s cavities. There were references, particularly during the terrible winter of 1846-47, to the limbs and bodies of the starving swelling until they burst.

Pellagra and scurvy were the Great Famine’s other significant non-contagious maladies. Pellagra is a deficiency disease caused by a lack of niacin or vitamin B3 in the diet, and is characterised by dermatosis, diarrhoea, and dementia.

The condition is often linked to prolonged and excessive consumption of maize, which in Ireland was known as Indian meal, the standard substitute food for the blighted potato crops of the 1840s.

Scurvy is caused by vitamin C, or ascorbic acid, deficiency. Potatoes were the main source of vitamin C for the Irish poor, and scurvy appeared following successive failures of the crop from autumn 1845 onwards. The initial symptoms are weakness, breathlessness, exhaustion, and mental depression.

Bleeding under the surface of the skin causes purple blotches on the limbs and then on other parts of the body, a feature that prompted the condition’s vernacular name cos dubh, black leg. The further progress of the malady is marked by profound exhaustion, with a tendency to fainting, and with various complications, such as diarrhoea and lung or kidney troubles, any of which may prove fatal.

Famine-related deaths and emigration – more than 3 million people, thirty-five per cent of the pre-Famine Irish population of 8.5 million, in the decade 1845-1855 – depleted the reservoir of disease in the country, and the incidence of fever and other infections declined significantly in the wake of the Great Famine.

It is ironic that the virtual extirpation of the underclass that harboured illness and infection rendered the future safer for the survivors and their children.

Laurence Geary was senior lecturer in history at University College Cork before his retirement, and has written extensively on the Great Famine and on the political, social and medical history of nineteenth-century Ireland.