After London, Dublin city was the key administrative and decision-making centre for all aspects of the Famine island-wide. Here were the residences of the Lord Lieutenant and the officers of the Crown in Ireland, the offices of the Poor Law Commission, the Relief Commission, the Board of Works and the Central Board of Health.

Dublin Castle was at the heart of this centralising authority, ensuring the detailed supervision, inspection and auditing of every aspect of relief, whether exercised by the Office of Public Works, relief committees or the Poor Law unions.

Within the city, two unions were established with the River Liffey as the boundary between the North Dublin and South Dublin Unions, located on the poorer northwestern and southwestern edges of the built-up area. The 1841 city population of the North Dublin Union numbered 97,032 persons, but the union territory also extended into eight DEDs encircling the city from Blanchardstown to Howth, making for a total union population of 123,095.

The 1841 city population of the South Dublin Union was 135,694, but again this union included a ring of settlements and boroughs from Clondalkin to Whitechurch and comprised a total population of 178,408.

The South Dublin workhouse made use of the Old Foundling Hospital and the original City of Dublin workhouse dating from 1703. The cost of rebuilding and adaptations came to over £10,000 to house an inmate population of 2,000. It opened on 24 April 1840.

The North Dublin Union took over the House of Industry on North Brunswick Street, which had been established as a private charity but it had long depended on government funding. Refurbishment costs to house 2,000 inmates came to £8,000 and it was opened on 4 May 1840. 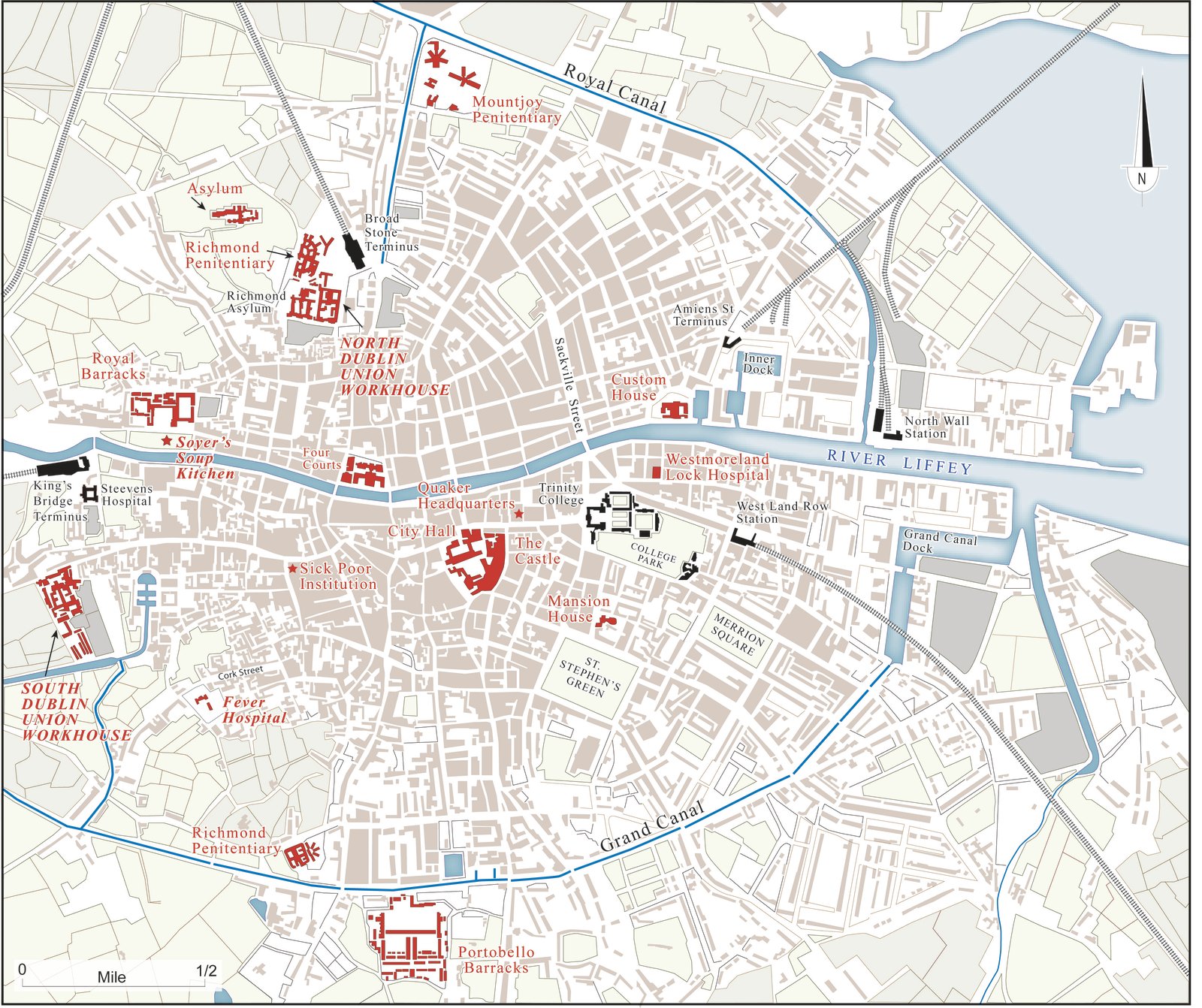 As famine conditions intensified in 1847, the south city Fever Hospital in Cork Street became crowded and another house was hired nearby while temporary fever sheds were erected at Kilmainham. The North Dublin Union obtained premises in Glasnevin for a fever hospital.

Elsewhere, in 1847 a French chef, Alexis Soyer, opened his famous model soup kitchen in front of the Royal (later Collins) Barracks. Eventually, this kitchen was given to the South Union and installed in a house in Dolphin's Barn.

By late 1847, the capacity of both workhouses had been increased to house up to 4,000 inmates, reflecting not only levels of distress in the poorer western areas of the city but also both the influx of destitute people from the south and west of Ireland as well as the reflux movement of emigrants forcefully returned to the North Wall quays from Liverpool and other British cities.

As many as 60,000 of the often migrant poor were in receipt of outdoor relief at the height of the city's famine crisis in 1848–49. Nevertheless, it should be emphasised that Dublin city and its unions never had to face the scale of the famine horrors, disasters experienced in Connacht and Munster.